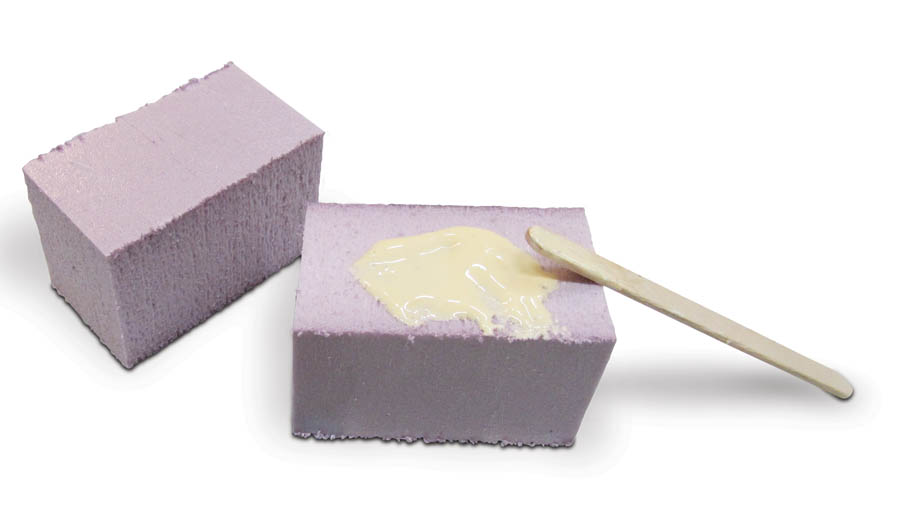 This project deals with several common problems we run into when building with foam or repairing foam structures. In the process of making a plug for a cowling, wheel pants, wing tips, or other fiberglass mold, small foam blocks are often glued together to make a large carving block. Before shaping begins, dents, divots, and uneven seams have to be filled. The block is then carved and sanded into the desired shape and finished before making a fiberglass mold around it.

When foam blocks are glued together with T-88 or an epoxy/micro or epoxy/flox mix, a hard glue line is produced that is difficult to sand or carve. Additionally, any glue that squeezes out of a joint is hard to remove without damaging the underlying foam. If large gaps are filled with an epoxy mix, considerable weight is added, and the thick section is even more difficult to sand true to the surrounding foam surface. 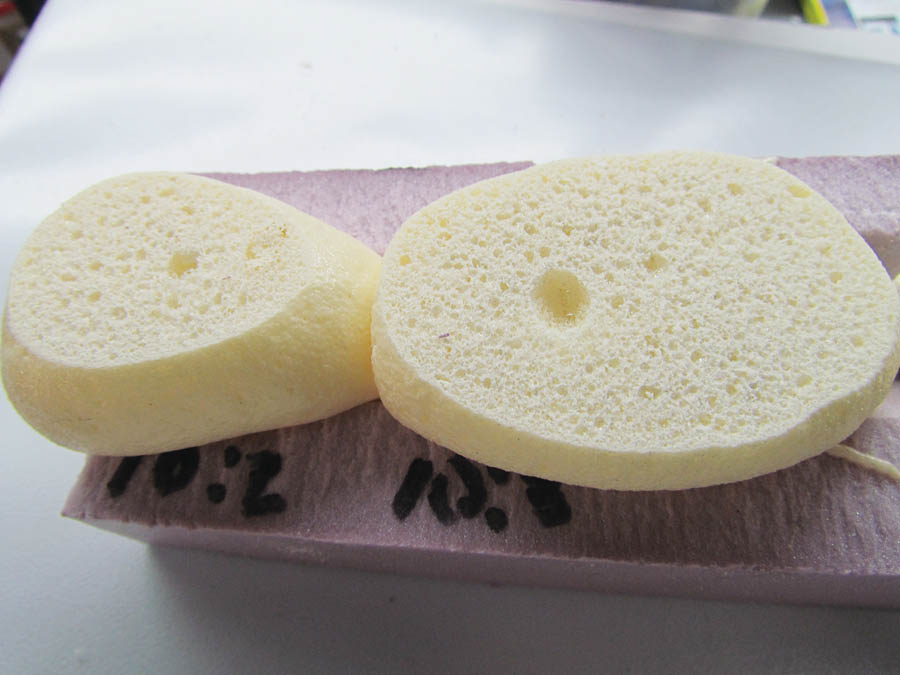 Bubbles that form can be filled with Spackle.

Occasionally, large nonstructural gaps must be filled. This is often done with pieces of foam set in a mortar of epoxy/micro, making a hard-to-sand lump in the middle of a soft foam piece. Two-component urethane foam may be used, but it is expensive and has a very finite shelf life in the can. In addition, urethane foam melts some foams used in aircraft construction.

One possible solution to the above problems is to make your own foaming glue as you need it. You can use common items you probably already have in your shop. The magic ingredients are foaming urethane glue and lightweight, water-based wall Spackle.

Unlike epoxy mixes that leave a hard glue line that is tough to sand flush with the base foam, foaming glue with Spackle cuts and sands easily, much like blue or pink insulation foam. It also expands to many times its original volume.

For this test, Gorilla brand urethane glue and Sherwin-Williams Shrink-Free Spackling were used. Other brands might also work, but always do a small test on scrap material before tackling the real project. 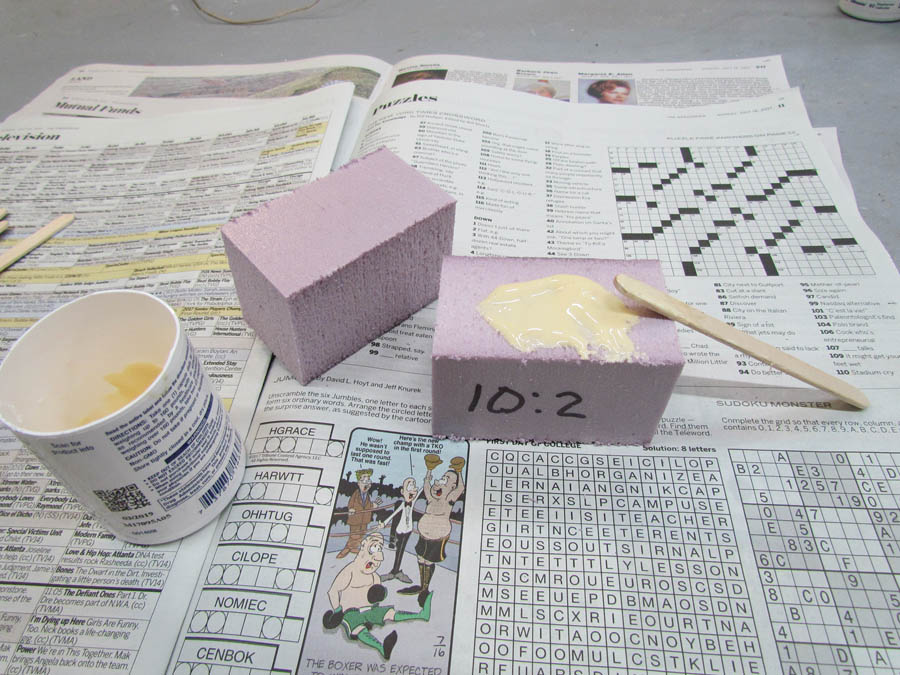 Spreading Gorilla Glue/Spackle on foam blocks to be bonded together. Curing time is hours, depending on temperature. The colder the workspace, the longer the cure time.

Mix ratios by weight between 10:2 and 10:5 of Gorilla Glue to Spackle sand well and produce the smallest foam bubble size. Strength testing shows the resulting foam bond to be approximately 60% of the strength of blue or pink foam, which is equal to or better than the strength achieved with epoxy mixes. Therefore, Gorilla Glue/Spackle foam could be used in low-stress, structural applications. After the foam is sanded to shape, the open bubbles may be filled with straight Spackle as discussed in “Using Drywall Spackling Paste As a Filler,” which appeared in the November 2017 issue of KITPLANES.

Foam blocks glued together with straight Gorilla Glue alone will also produce joints that are hard to sand. In addition, straight Gorilla Glue will only fill limited gaps because it tends to run and pool before kicking off the foaming process. In contrast, when mixed in the correct proportions with lightweight Spackle, Gorilla Glue is transformed into self-foaming glue that doesn’t run, even on vertical surfaces, and it nearly duplicates the strength of the surrounding foam while leaving an easily sanded glue line. 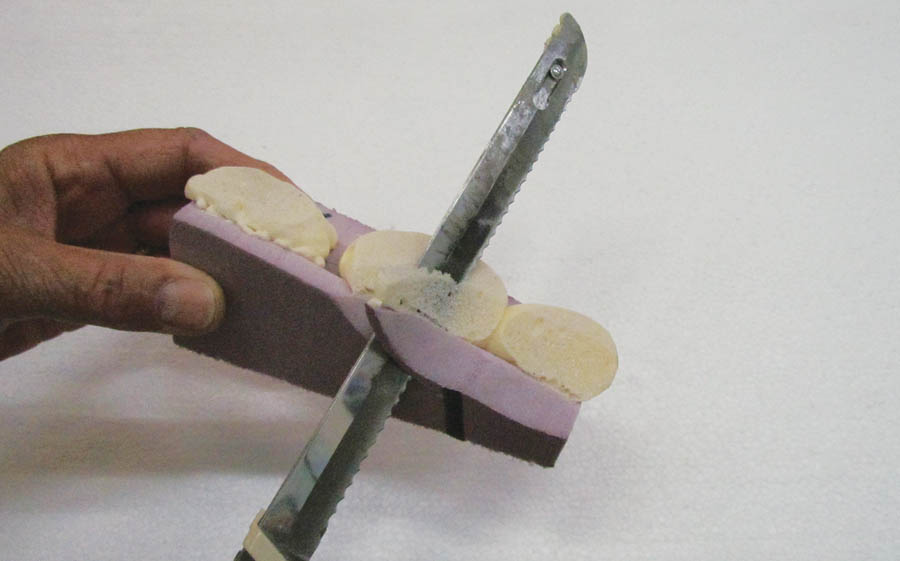 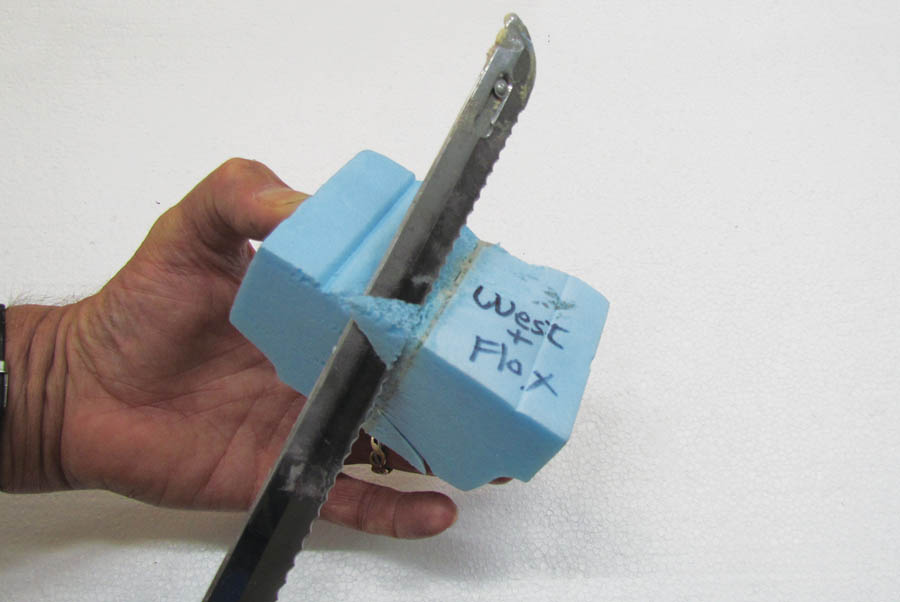 Many combinations of Gorilla Glue and Elmer’s urethane foaming glues mixed with lightweight, water-based Spackle were tried and tested. The recommended combination is (by weight) 10 parts Gorilla Glue mixed with 2 to 5 parts Sherwin-Williams Shrink-Free Spackling. Cotton flox up to 2 parts may also be added for an increase in strength. The 10:5 mix produced the best combination of joint strength, foam quality, and ease of sanding.

The graph shown on the right illustrates the glue joint failure point for various mix ratios. The data scatter is in some part due to some of the samples having added water. Mixes with less Spackle produce good joint strength and foam quality, but the sanding characteristics degrade because the stronger mix foam is harder than the blue foam blocks. Note that all the joints glued with Gorilla Glue/Spackle are approximately the same strength as those glued with epoxy/flox and stronger than those where epoxy/micro was used. 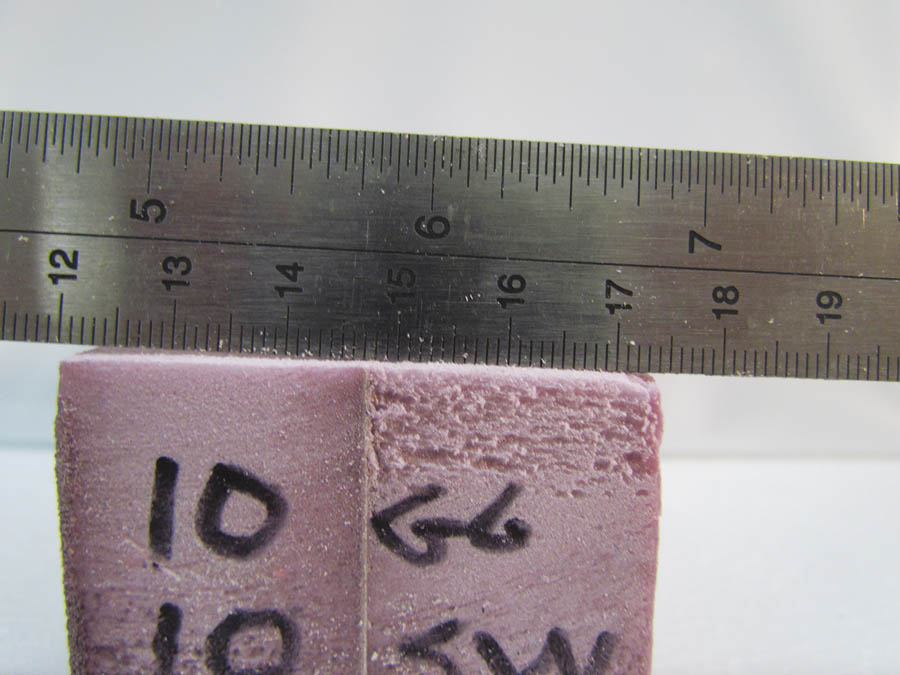 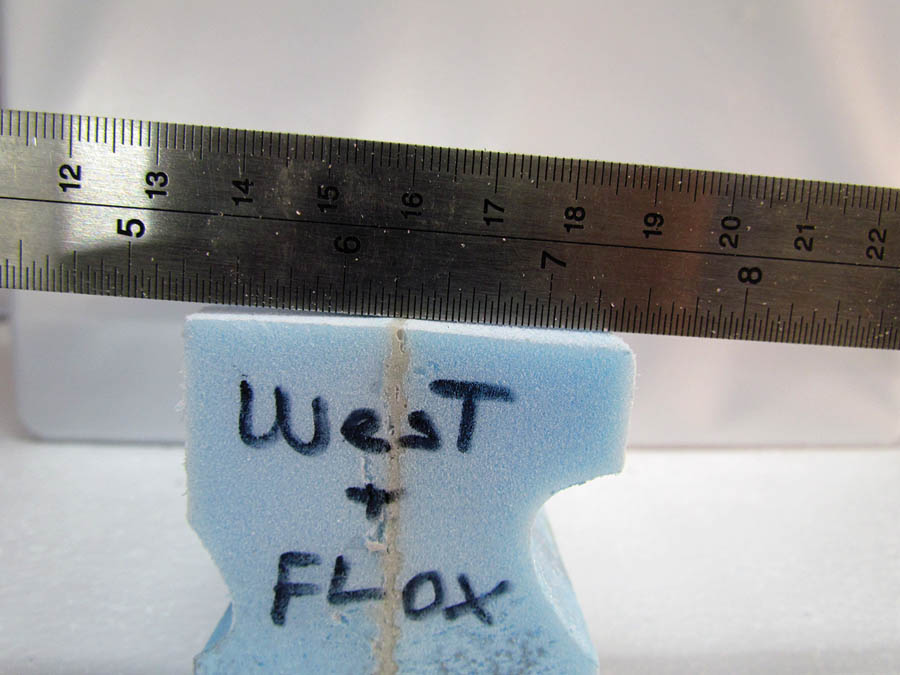 Gorilla and other brands of foaming urethane glues require the presence of water to drive the foaming process. Normally, water is drawn from the air, or to accelerate the process, water is applied to one of the surfaces to be glued. This causes the curing process to occur in closed joints where the availability of water from the air is limited.

One answer to the need for a low-density foam filler and for non-running foam glue is a mix of lightweight wall Spackle and water-curing urethane glue. Previous testing using Spackle as a foam filler left us with a collection of the various brands and their characteristics. Sherwin-Williams Shrink-Free Spackling was found to be the best performing and was used in all tests. Both Gorilla and Elmer’s urethane glues were tested and found to be similar. However, I happened to have a supply of Gorilla Glue, so that brand was used for most of the testing. 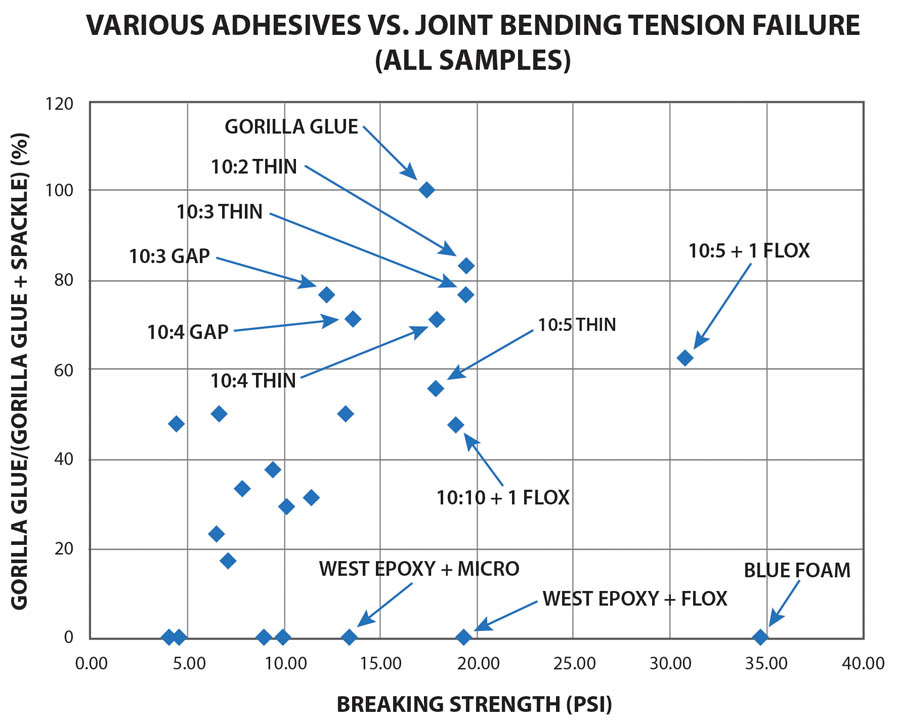 Home Depot pink and blue insulation foam blocks were prepared two ways: Some blocks were milled so a -inch void was available to be filled with the test foams, while others had flat mating surfaces to simulate normal foam block bonding. After the urethane foam samples were cured, the edges were sliced off exposing the glue lines. These samples were examined for suitability, and some were found to have little or no joint strength. The promising samples were tested for failure strength in a small press. 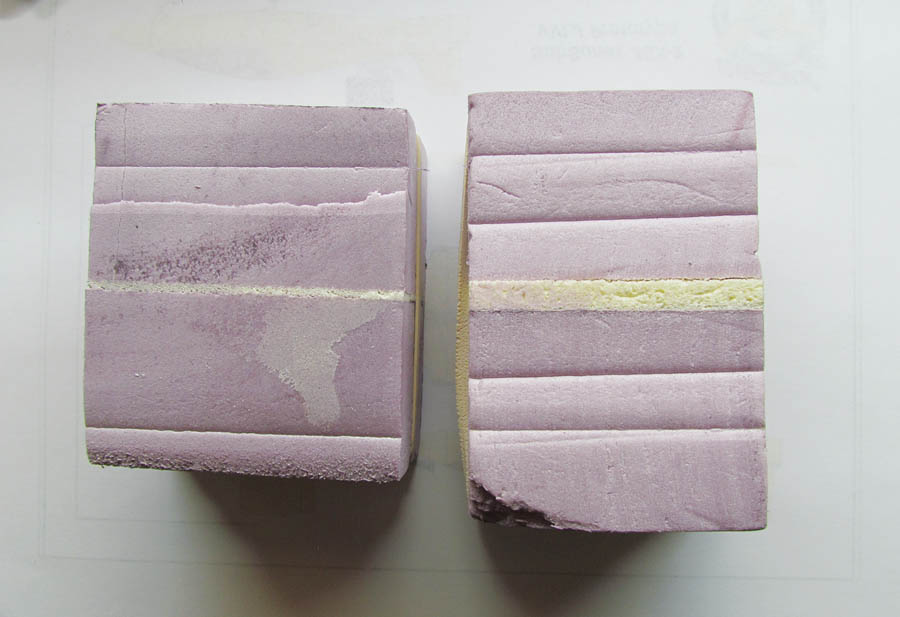 To test for foam expansion, a measured volume of each Gorilla Glue/Spackle mix was placed in a cup and allowed to cure. After the foam was cured, the remaining cup volume was determined by measuring the volume of water required to fill each cup to the top, and the density was computed. 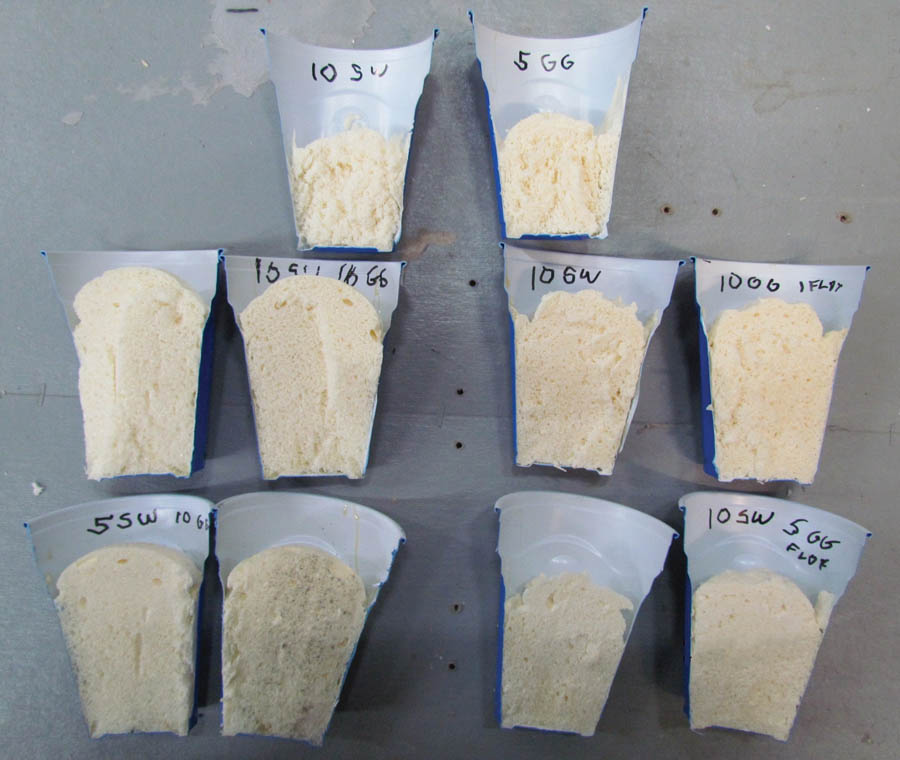 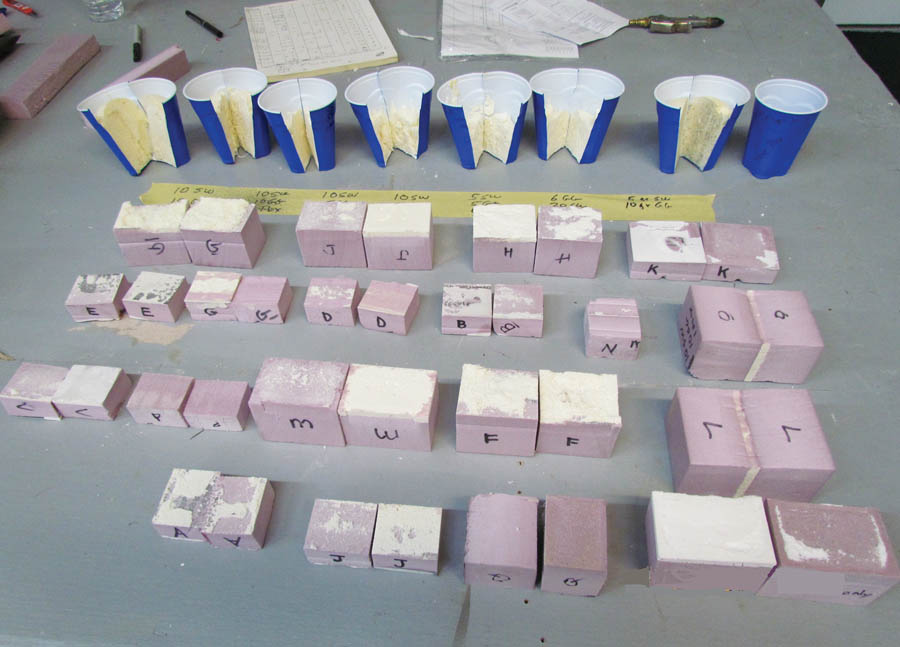 In addition to the Gorilla Glue and lightweight Spackle mix, water and flox were added to some samples. The samples with extra water did not cure well, while extra strength was detected in the samples where flox was added.

In conclusion, mixes of urethane foaming glue and lightweight Spackle can be used as strong glue for joining foam blocks or for filling gaps. Joints and voids filled with these mixes are sufficiently strong to be as structural as the foam blocks being glued, and these mixes sand well when cured. Once sanded, the filling and finishing process proceeds, the same as would be used on the base foam blocks.