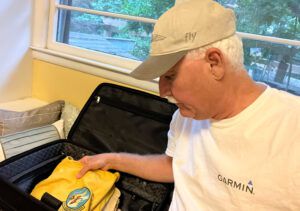 On the eve of the 2022 version of the greatest pilot gathering on earth, my anticipation and excitement approach VNE. I attended my first AirVenture in 1986. Back then, it was only called the EAA convention. In the years since, I have missed only 2 annual pilgrimages to OSH. Having completed 67 orbits of the sun since my birth, it appears that I have attended this sacred event more than half of my lifetime.

While I have camped at AirVenture on numerous occasions, this year I have, for no particular reason, opted to reside at the University of Wisconsin dorms. I guess I am hoping to experience the same amount of camaraderie with my fellow aviators without the risk of having to wring out my sleeping bag after a monster Wisconsin storm cell visits in the middle of the night. Maybe I am getting old and soft.

This being my “camper” journal, I guess I am taking some artistic license. At this point in my well-seasoned life, however, dorm life may be as close as I get to camping. Hell, my wife considers it camping whenever she is booked below the 10th floor of the Ritz Carlton. Nevertheless, I will happily journal this “camping” experience during AirVenture in hopes that those stuck at home can crack a smile and maybe plan on camping with me and 650,000 of our closest pilot buddies next year.

Scoring a reservation at the University dorm was fairly easy, even though I waited too late and had to be placed on a waiting list. Luckily, after two weeks of sweating it out, I received the glad tidings of my investiture as a dorm resident via email. For my $800+ dollars, I will receive the privilege of spending 9 nights in an un-air conditioned dorm room with two beds. I offered a few Atlanta based friends the chance to be my roomie, but nothing panned out. This morning, only a day before arriving at OSH, I posted an invitation in my Van’s list serve (Van’s Air Force) and a few hours later, I heard from my new friend, Tye, from Orlando. I still don’t know his last name, but I know he is building an RV-10, so he is probably not a mass murderer. We had a short talk over the phone. I determined that he is a fellow member of the happy to be here club, so I feel certain we will get along fine.

Tonight I am packing. It should be easier since I will not have to pack a sleeping bag, flashlight or cooler. No duffle bag this year. My wife convinced me to bring a roll on suitcase. Sheesh. I am flying into the show this year, however. I think I will fly my 737. The weather is predicted to be a little convective, so I am expecting a sporty approach into MKE. I sure hope I don’t spill my drink in the back.

If you can’t make the show this year, I hope that you will come along with me and my homies at Kitplanes as we bring you some of the millions of stories that make AirVenture so magical. We promise you a great ride.

Tom Wilson - April 17, 2012
0
There are many ways to increase an engine's efficiency when rebuilding. Tom Wilson reviews the options, along with the costs involved and the expected returns.