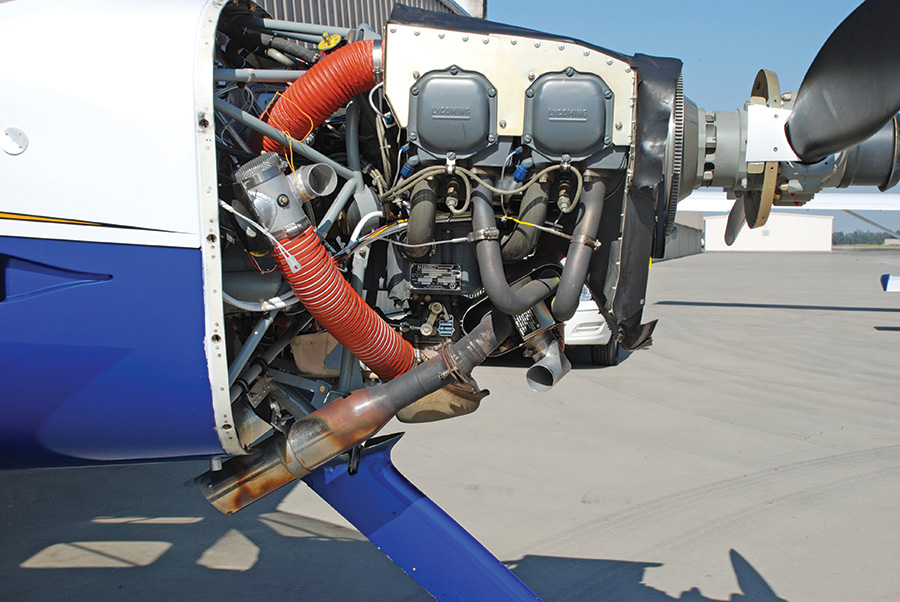 More power. Everyone wants it, but how do you get a real performance increase without tearing your engine apart? Power Flow Systems, Inc. has an answer for at least some Experimental aircraft builders and many certified aircraft owners. But how do we know their exhaust system really makes more power? Well, there’s nothing like a head-to-head test to prove the point.

A well-proven Sportsman 2+2 with a Lycoming O-360-A1F6 engine was the test bed. First, the standard Cessna-type exhaust system provided a baseline for the tests. This is a basic four-pipes-into-a-big-can exhaust system. After collecting data on this system, the Power Flow exhaust had its chance. Darren Tillman, of Power Flow, witnessed and assisted with the tests; I flew the airplane and made sure all conditions were as equal as possible for all the tests. Corona Airport (KAJO) in Southern California served as the base for the testing. It sits at an elevation of around 530 feet msl. 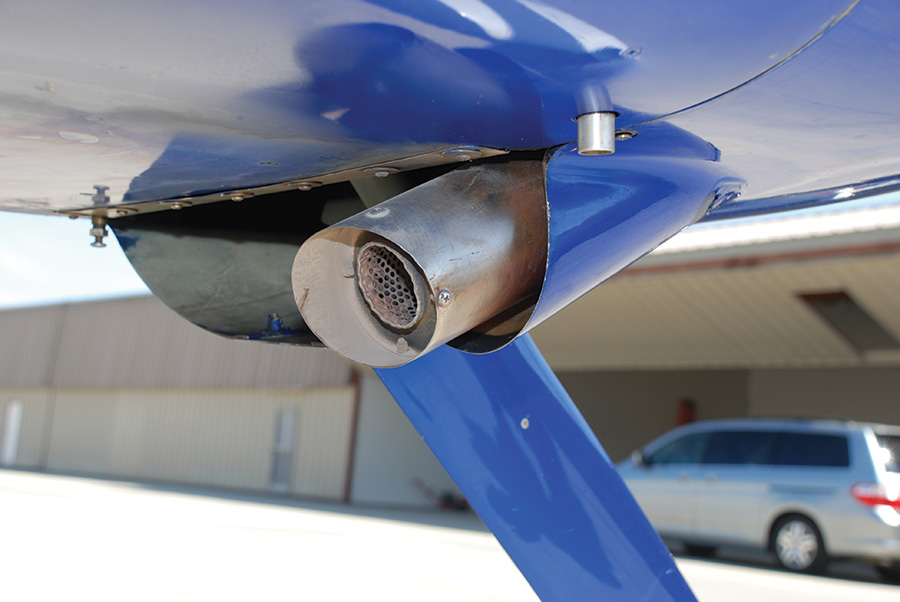 Unlike many production aircraft for which the Power Flow exhaust is STC’d, the Sportsman system can be hidden with a cowl modification.

A standard exhaust system (as sold by Stoddard Hamilton and later by Glasair Aviation) for the Lycoming O-360 engine served as the benchmark for this comparison. This is a fairly typical system, much like you might find on a Cessna. It works fairly well, but makes no claims to be a tuned exhaust system. This was pitted against the Power Flow exhaust system, which is a tuned system. If you are a car nut, you can think of it as headers for your airplane. The principle is the same—namely that a free-flowing exhaust system of a specific length will deliver improved performance at the rpm for which it is designed. It works on cars and there’s no reason it shouldn’t work on airplanes, too.

Since the Sportsman started life with the Power Flow system in place from the beginning, some remedial work was required to get the stock system to fit. It wasn’t all that hard, but it did involve rerouting a number of SCAT tubes and adding a short extension onto the tailpipe of the stock system to get the exhaust to come out where the Power Flow system does. As it is with all such little projects, this one turned into something of a big project by the time everything came together. With both systems finally ready to go, and with a pile of exhaust gaskets, nuts and lock washers in hand, it was time to get on with the testing.

The test regime was fairly straightforward. Timed takeoff rolls from 0 to 40 knots IAS with both systems came first, to get a good idea of how the takeoff distance would benefit from the Power Flow system. This was much easier than trying to determine the exact time the wheels left the ground. Next came timed climbs from 2000 to 8500 feet msl. These were done at 2700 rpm and wide-open throttle with the engine leaned to 75° rich of peak EGT all the way up. The last tests were for cruise speeds at 8500 feet. Both systems took their shot at best cruise speed at 2500 rpm and 2700 rpm. The tests were performed on two consecutive days under weather conditions that were as identical as possible. 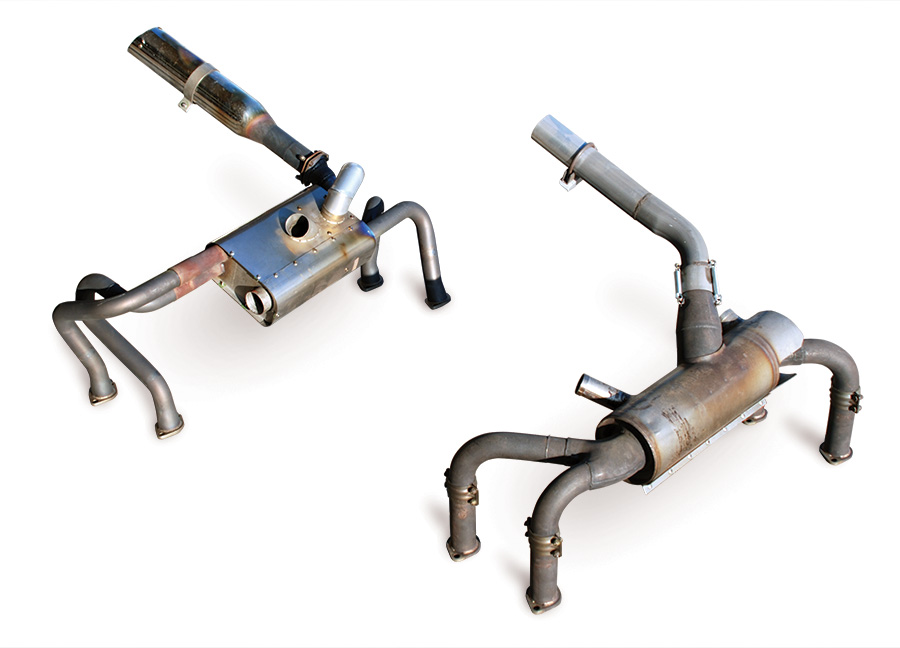 The Power Flow system (top) has a much larger final exhaust pipe and a smaller heater muff compared to the standard system (bottom).

The results were pretty much as expected. The Power Flow exhaust did improve performance in all categories. The improvements were not dramatic, but they were significant nonetheless. The real surprise came from the fuel consumption numbers at identical power settings. With lean-of-peak leaning, 1.6 gallons per hour at 2500 rpm in cruise could be saved. This sort of aggressive leaning was not possible with the standard exhaust system. With avgas heading north of $6 per gallon, the savings is pretty impressive.

Here are the actual numbers: Takeoff rolls with the stock system were about 11 seconds, but with the Power Flow, they improved to about 8.6 seconds. This equates to an improvement in takeoff distance of 80 feet, from an airport at 530 feet elevation on a 70° day with light to no wind.

Timed climbs showed improvement, too. When climbing from 2000 feet to 8500 feet with the stock exhaust system, it took 10 minutes and 17 seconds at a constant 80 KIAS, using maximum available power at 2700 rpm. Constant mixture adjustments and careful monitoring of cylinder head temperatures kept performance at optimum during the climb tests. With the Power Flow system, climb time improved to 9 minutes and 19 seconds, just about 1 minute better.

Cruise speeds at 8500 feet capped off the testing. The drill was to set the autopilot on a heading and altitude, lean the engine for best power, let things stabilize, wait two minutes before recording the airspeed and groundspeed, then turn 180° and repeat the process. This was done at 2500 and 2700 rpm with both systems. At 2700 rpm, the best cruise speed recorded was 139 KTAS with the Power Flow versus 135 KTAS with the stock system, a 4-knot improvement. The results were similar at 2500 rpm, where the Power Flow system brought a 3-knot improvement. 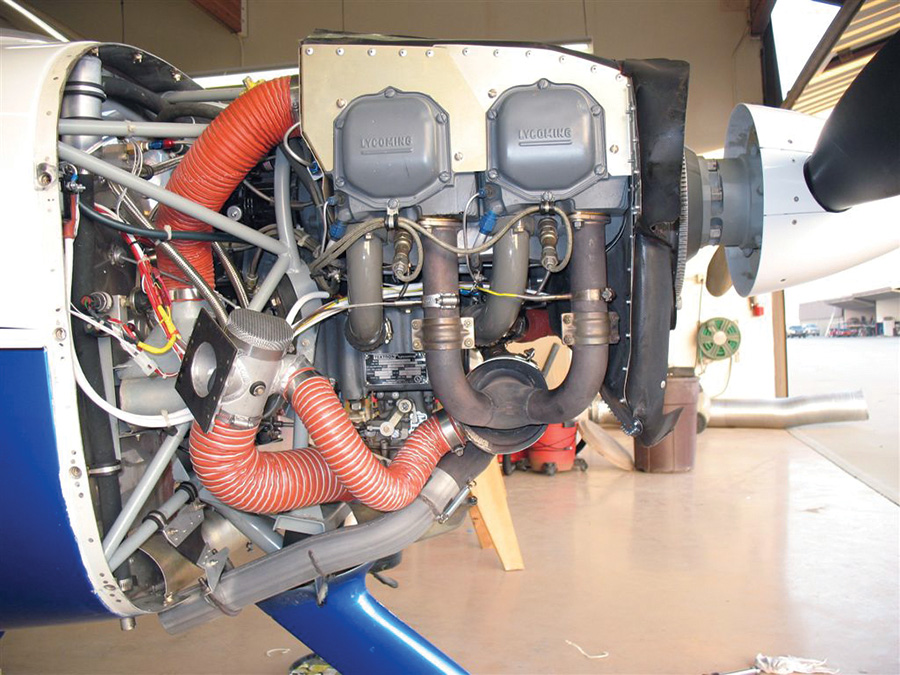 The original Sportsman exhaust system is similar to that on a Cessna—a large can-type muffler tucked underneath the engine and a single exhaust pipe leading out of the cowl.

Since both systems provide sound muffling, Tillman checked the cabin noise levels to see how they stacked up in that department. It turned out they were virtually identical. Both systems produced 102.5 dB at cruise power of 2500 rpm, and at a fast idle of 1100 rpm, the Power Flow registered 78 dB compared to 79 dB for the stock system.

Tracking fuel flows produced a somewhat unexpected result. With the Power Flow system, leaning past peak EGT became feasible. This resulted in some fairly impressive reductions in fuel flow at cruise. For instance, at 2500 rpm we were able to lean to 8.0 gallons per hour. This cost 3 knots off the cruise speed, but yielded a fuel flow some 1.6 gallons per hour better than the stock exhaust system. Thus the speed advantage of the Power Flow system could be traded for a nice fuel saving, if desired.

So, does the Power Flow system work? Yes, it does. It provides a measurable increase in performance in the Sportsman with an O-360 engine. Is it worth the extra money? That’s a question you’ll have to answer for yourself. If you are starting from nothing, the Power Flow system will cost about $1900 more than the stock system. If you are replacing a serviceable stock system, you will have to absorb the full $2895 for the Power Flow. If you want dramatically better performance, there’s no substitute for more cubic inches—in other words, get an IO-390 engine. But if you are watching weight and cost, and especially if you already have an O-360 or IO-360 engine, the Power Flow seems to make sense. You’ll get more performance with no weight gain or extra noise. It also retains an effective cabin heat system, which is something that can’t be said for some other tuned exhaust systems. Of course, you could install a Power Flow system on an IO-390 engine and really have some extra ponies to play with. But that’s a topic for another article.

The negative pressure pulse can be used to scavenge exhaust gasses out of the cylinder and pull the intake charge in. This is where the increased horsepower comes from. The trick is that the timing of all of this must be just right to optimize the effect. In a car, this is tough because the rpm range is so wide, but airplane engines operate over a very narrow rpm range, so picking the correct setup is relatively easy.

Here’s how it works: The pressure pulse travels through the pipe at the speed of sound —roughly 1100 feet per second. At a specific engine speed, say 2500 rpm, it is fairly easy to calculate the time from when the exhaust valve first opens until it is in the optimum position for extracting the exhaust gasses in the cylinder. Then it is just a matter of building a system with the correct length of pipe, so the negative pressure pulse arrives back at the face of the exhaust valve at the optimum time. When all this works as planned, the negative pulse draws the remaining exhaust out of the cylinder and helps propel the intake charge in. But if the negative pressure pulse arrives too early—or too late—it is of no help.

Once you calculate the correct length and verify it with some testing, it’s just a matter of getting it to fit inside the engine compartment, which of course, may not be that easy. This is the theory of tuned exhaust in a nutshell. In the final analysis, the proof is in the pudding, so to speak. You build a system, put it on your airplane, go fly it, and see what happens. If it goes faster you did good; otherwise it’s back to the drawing board.

Dave Prizio is a Southern California native who has been flying since 1973. Born into a family of builders, it was natural that he would become a contractor and spend his leisure time building airplanes. He has completed three: a GlaStar, Glasair Sportsman and Texas Sport Cub. He shares his love of aviation by flying Young Eagles and serving on the EAA Homebuilt Aircraft Council.

Jim Weir - July 19, 2011
0
Documenting the changes you make to your airplanes electrical system is tedious work-but vital. Jim Weir takes a look at the software available to help you keep track of upgrades and mods.