Not wanting to miss the Mojave Experimental Fly-In earlier this year, we were consulting our quaintly antique paper calendar when the fly-in’s date—April 21, 2018—struck a note. “Ah, the 100th anniversary of the death of the Red Baron.” Such things are second nature to old Cross & Cockade members such as myself, if not, perhaps, frontline news fodder these days.

That I could think of no one who would care should I mention the anniversary got me to thinking just how lost the entire cataclysm of WW-I is to we moderns. Understandably self-absorbed by the challenges of the dawn of the computer age we’re currently navigating, and judging from talking with today’s school kids, we’re seemingly only barely aware that the far larger and more defining WW-II actually occurred. So what utility is there in recalling the slaughter invoked when the old world first met mechanized warfare? Hopefully, just enough to remind us that new technologies often—but not always—make old thinking dangerous.

And in the context of our interest in flight, WW-I was one of several easily delineated periods of intense progress. If the Wright brothers could, with the help of a stiff headwind, just barely claim success in late 1903, it wasn’t until 1908 or so when aviation could reasonably be said to have reached a sense of irrefutable existence. By then the rich playboys (is there another kind?) were sufficiently plentiful and garnering enough press via their box kite crashes that the concept humans could just barely fly was an accepted fact. But in the incredibly short six years from 1908 to the opening cannonades of 1914, the sportsmen and emerging manufacturers made incredible progress. 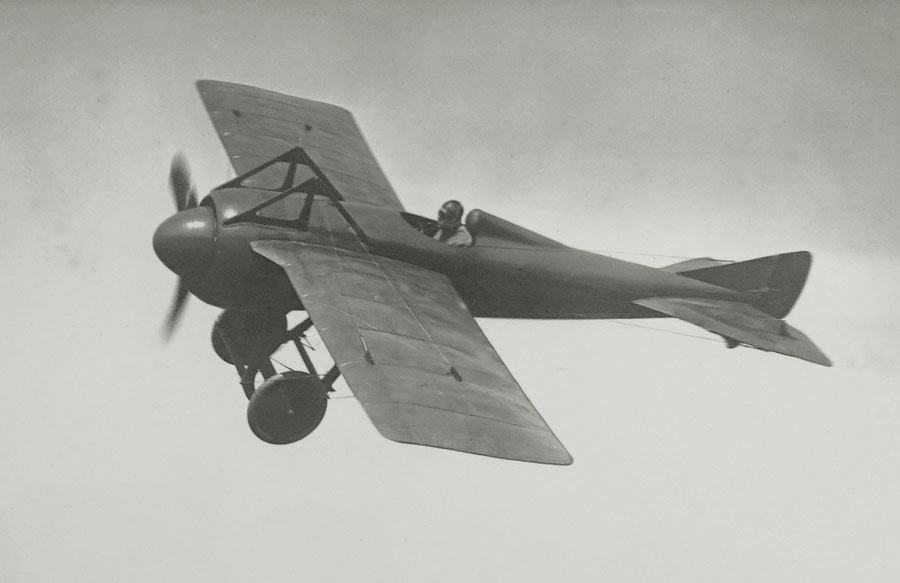 Impossibly sleek for 1913, the 127-mph Deperdussin Monocoque exemplifies the tremendous growth of experimental aviation in the five years prior to WW-I. (Photo: public domain, via Wikimedia Commons)

Blriot, by the grace of a providential engine-cooling rain squall, avoided swimming at least part of the English Channel in 1909. Two years later, paying passengers could book a sightseeing flight on a Zeppelin, and in 1913 the world’s airspeed record—held by Henri Farman in 1909 at a polite 33 mph—was a shattering 127 mph thanks to a brave Prvost in an incredibly sleek Deperdussin Monocoque. He was almost as fast as Glenn Curtis on a motorcycle: 136 mph in 1907!

In fact, by the start of the First World War, much of what we accept as a sport plane today had been, if not perfected, at least laid out and tried.

Of course, the Great War itself was a huge impetus to aviation technology, mainly in engine development, systems, and manufacturing. In fact, it’s been said airframe development in 1914-1918 was more stymied than aided by the runaway gains in power development. For example, monoplanes made an early impression, but after some structural failures a retreat to the more forgiving biplane layout ensued. Aerodynamics was still very much in its artistic phase during the First World War. You can’t help but chuckle at the early contraptions, a forest of struts braced by miles of round wire, and right there in the middle of it is a fuel tank suspended above the engine, each end of the cylindrical tank craftily fitted with horizontal dunce caps in the thought such a tumbleweed might go 59 mph instead of just 58 and a half.

If streamlining was imperfect, the ever more powerful engines made up for it. The war opened with the odd rotary layout easily offering the best power-to-weight ratio, and often the outright best power. Practically peaking at around 150 hp before generating overwhelming gyroscopic forces, the more powerful rotaries produced some rather snappy units when coupled to a light airframe. The dangerously maneuverable Sopwith Camel comes to mind.

Eventually, water-cooled in-line engines obsoleted the rotaries. Notably the Hispano-Suiza at 150 and then 220 hp muscled in, and Rolls-Royce debuted their Eagle V-12 at 225 hp in 1915 and had it making 360 hp by early 1918. Not to be outdone, we “too much is just right” Americans contributed the 400-hp Liberty V-12 by war’s end. It took three men holding hands to prop the thing to life. 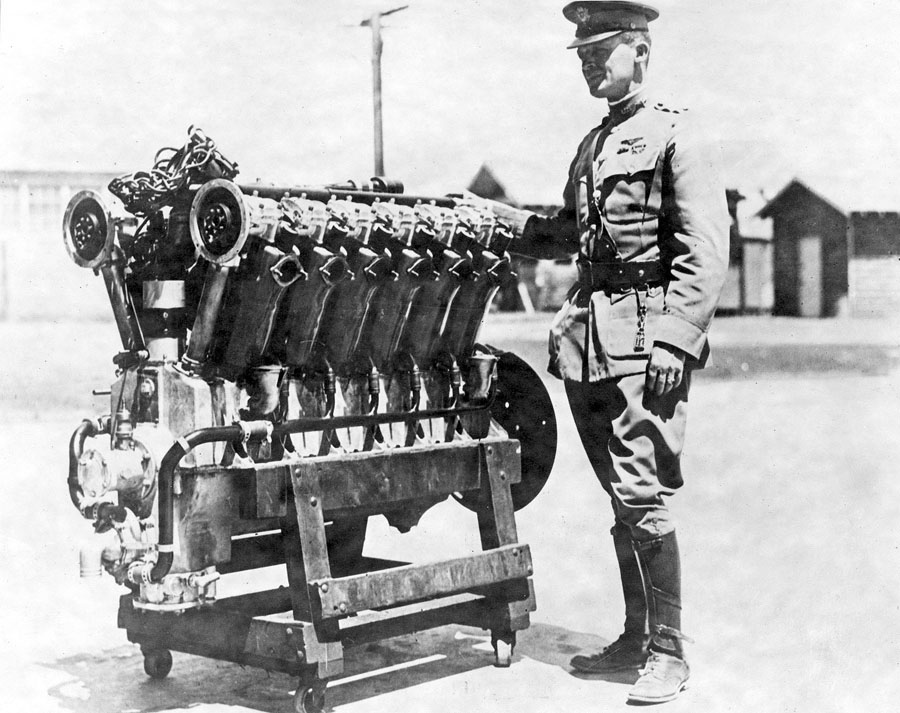 Systems growth between 1914 and 1918 was incredible. That first year of hostilities, the canvas and spit production airplanes were just capable of consistent flight and featured nothing more than an ignition switch swiped from household wiring, fuel petcock, stick, and rudder. There were no instrument panels because there were no or few instruments. Communication outside of hand signals was non-existent, even from front to rear cockpits. Many airplanes couldn’t even carry the weight of a light machine gun and its ammo, and when German Lieutenant Ferdinand von Hiddessen puttered over Paris punctually at 5 o’clock in the fall of 1914, the grenade-sized bombs were dropped by hand, and Parisians came outside to watch.

By 1918 hydraulically operated synchronizing gun gear was standard equipment, and the bombers carried a ton of bombs, featured wind-driven electrical systems, wireless telegraphs for ground coordination, and electrically-heated flight suits. Night operations were common by 1917—a rather daunting prospect then—and shoot-downs at over 20,000 feet were not unknown. Parachutes were standard for German pilots by 1918, and the larger aircraft might have supplemental oxygen for the crew. The fighter and its tactics had been defined, likewise the tactical and strategic bomber, ground attack, utility, trainer, and other categories. One-on-one combat was pass, and coordinated attacks by hundreds of airplanes were underway.

Likewise, manufacturing went from cottage output to smokestack mass production. Aviation went into WW-I as a hobby and came out an industry.

After the war aviation was once again left to the slow progress of amateurs, then was lobbed to the finish line of the propeller age by government research in WW-II. Since then, pistons and props have been mainly left to languish—at least there has not been a major push—bringing us to our everyday reality of antiquated but thoroughly developed powertrains.

But as we go forward, it seems as if we experimenters are slowly defining a new era of greater efficiency. Unlike the conflict-driven epochs of the past, this one has come more from curiosity and persistence than government largesse, although the satellite-based navigation and ATC systems we enjoy certainly show the benefits of collective taxation. The rest is mainly the adoption of new technologies developed elsewhere (or much further up the aerospace food chain), thus reversing the direction of technology transfer from aviation to automotive, as an example.

Today we have a fine maturation of kit aircraft technology. Excellent personal planes can be assembled from well-engineered and supported kits, so much so that general aviation is far more dependent on experimental aviation, at least in numbers of new airframes being delivered, than the traditional certified route. We also have the still emerging promises of CAD design, CNC machining, digital avionics, CFD aerodynamics, Jet A fuel piston engines, and electrification before our amateur-built hobby, not to mention the harrowing prospect of AI in the development of autonomous aircraft. I still can’t bring myself to say “aerial vehicles.”

How we use these new tools, how we hobbyists stay relevant, and how well we can keep up with runaway technology is yet to be seen. At least it isn’t taking a war this time to see some progress.