Among the many tools I have amassed to build my RV-7A, my skin edge roller is one of my favorites (search for “edge forming tool” at Cleaveland Aircraft Tool). It consists of two rolling cylinders mounted edge-to-edge on the ends of a Vise-Grip’s jaws; the edges meet along matching concave/convex rolling surfaces. One cylinder’s edge has a flange to help run the tool straight against the edge of your sheet Alclad. The edge roller puts a slight bevel along the sheet aluminum’s edge. After you roll the skin edge inward, you then drill, deburr, dimple, and rivet. Once the skin is riveted into place, the rolled edge makes the skin lie nice and flat, rather than flaring upward slightly. 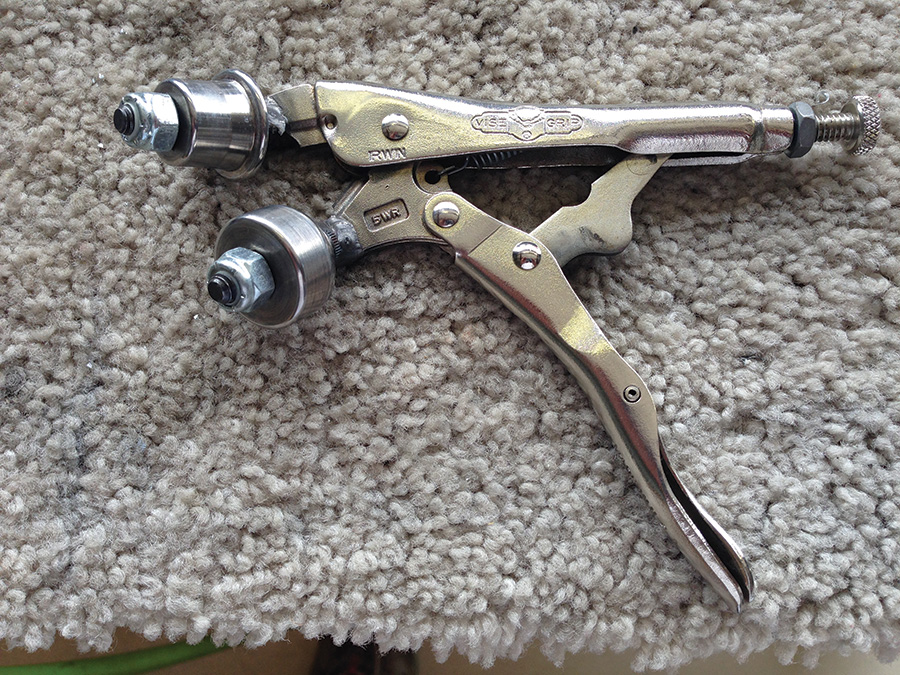 But the edge roller takes finesse, particularly when it comes to setting the Vise-Grip tension between the two roller wheels. If you set it too tightly, you can’t pull the tool down the edge of the skin. Too loose, and you may jump the tool’s edge flange up onto the skin. 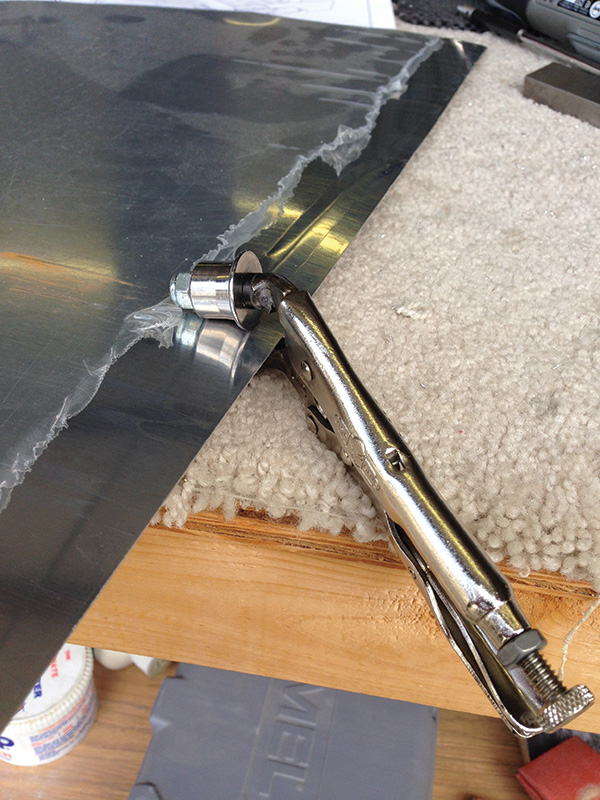 As I prepared to roll the edges on my RV-7A fuselage’s top center skin, a little voice kept telling me I should practice on scrap sheet Alclad first. After all, setting the tension is so critical. But, no, I’ve gotten pretty good at this, haven’t I? So I grabbed the edge roller, set what felt like the right tension, and went to work.

What I should have done was call a “knock-it-off.”

What is a Knock-It-Off Call?

Most of our readers with military aviation backgrounds are probably familiar with the knock-it-off call. In aviation training, all services recognize the knock-it-off call as the signal to immediately cease the exercise or maneuver for safety-of-flight reasons. Air Force Instruction 11-214, Air Operations Rules and Procedures, directs a knock-it-off any time a dangerous situation is developing or developed, including loss of situational awareness, unscheduled stranger traffic, bad weather, aircraft malfunctions, and the like. All players must acknowledge the knock-it-off, cease tactical maneuvering, and deconflict flight paths.

An aircraft mishap during military training is followed by a knock-it-off call. YouTube flight line video of the 2003 Thunderbird crash at Mountain Home Air Force Base features inter-flight VHF coms, and a crisp knock-it-off execution (the Thunderbird pilot survived, thankfully). However, we would much rather recognize the unsafe situation developing, and call a knock-it-off before the unsafe situation has developed. In my years as an F-4 air-to-air instructor, I called knock-it-offs whenever a jet was about to bust inside min-range rules, or opposing fighters were in my altitude block without positive visual contact…safety of flight stuff.

A knock-it-off is something you call over the radio, or just to yourself…just get the bad circumstance stopped. For example, Experimental pilots love formation flying and aerobatics. These are two activities that are ripe for the knock-it-off if things aren’t going right. Can’t nail those formation references? Air’s too bumpy? Problem with the aircraft? Call and execute a knock-it-off, deconflict flight paths, and go do something else. 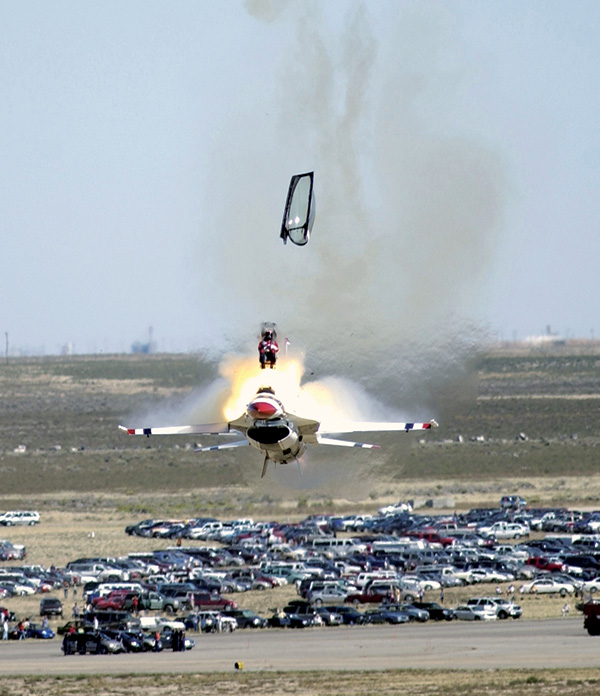 To me, the go-around and the knock-it-off are identical; for whatever reasons, the landing approach parameters or situation have deteriorated to a point that a stable or safe landing is questionable. American Airlines gives every pilot on their airliner flight decks the no-fault go-around call, whether they’re at the controls or in the jump seat. In keeping with FAA Advisory Circular 120-71A, American’s pilots cannot descend below 1000 feet above field level (IMC) or 500 feet above field level (VMC) unless the aircraft’s approach is stable. Stabilized approach means the airspeed is within -5/+10 knots of final approach speed, on the proper glide path at the proper sink rate, and engines are spooled up to the proper stabilized thrust. If any of this is off, any pilot must call a go-around, and the pilot flying and captain are obliged to comply.

Some aviators, though, just aren’t spring-loaded to go around when the signs an unsafe condition has developed are clear and present. Could it be that we’re concentrating too hard on the approach to recognize the dangerous situation’s development? Or do we just want to “save it”?

In a 2005 P-39 crash, the pilot was flying a straight-in approach to a 5,002-foot long runway when he noticed he was still above the 140-mph flap extension speed. He continued with a no-flap landing rather than go around. He touched down nosewheel first, experienced asymmetric braking, and struck a fence beyond the departure end. The pilot was uninjured, but the Airacobra was substantially damaged.

In a 2006 C-5 Galaxy crash on Dover Air Force Base, with at least three pilots and a flight engineer on the flight deck, the pilot flying commenced a visual 3-engine approach with normal 100% flaps (too much for this 3-engine condition). Nobody briefed the approach or discussed nonstandard factors like configuration, thrust asymmetry, landing distance, or missed approach considerations. With airspeed decaying below approach reference speed, and the flaps still at 100%, the big C-5 crashed just short of the runway, thankfully killing no one. If only somebody had knocked off the approach and directed a go-around. 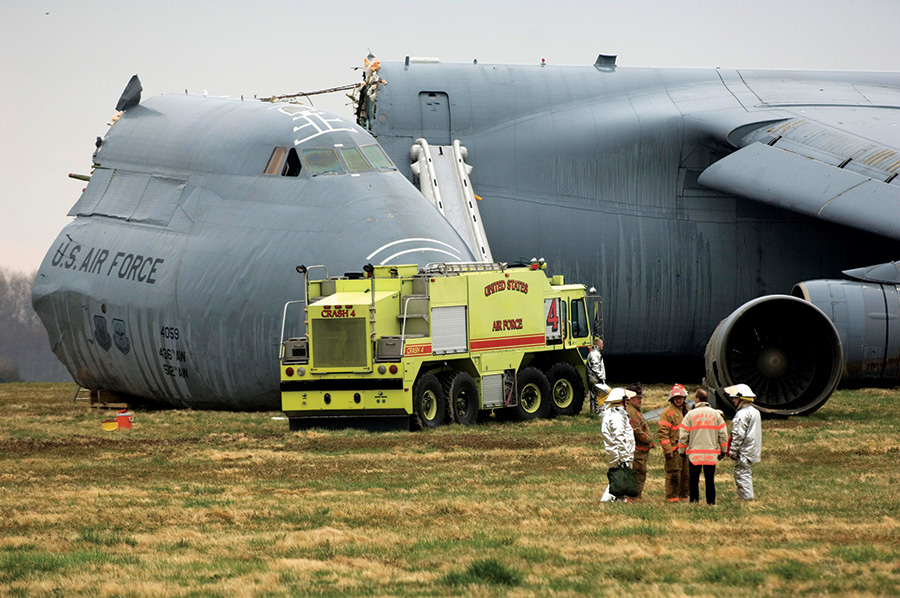 Calling the Knock-It-Off in the Shop

Here’s a kitbuilder axiom. There are two types of aircraft kitbuilders: those who have drilled into their hand, and those who will. I learned that one from a buddy of mine back at Langley AFB two years ago who was finishing his RV-7A, and he sheepishly (proudly?) raised his bandaged hand to make his point. It was then that I realized I had never taken a moment to check off any sort of mental checklist item regarding hand placement during drilling. “Air pressure…check. Free hand clear of the drill bit…check.”

This takes us to our next axiom: You don’t know that you have lost situational awareness (SA) until you suddenly regain it. When my buddy taught me the hand-drill axiom, I realized I had not been maintaining SA on my hands when drilling. It just seemed like common sense to keep my hands clear. Now I make it part of my mantra before I drill…”hands clear.” 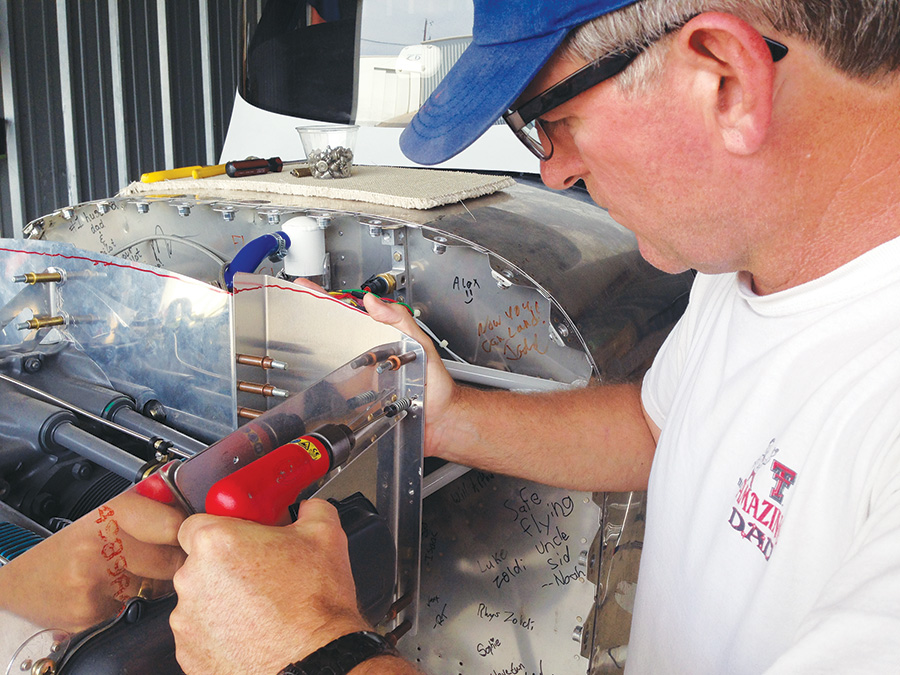 So one day, as I was about to drill #40 through my partially-complete engine baffle ramp, I realized I hadn’t checked my hand placement and was about to squeeze the drill trigger. “Knock-it-off, knock-it-off,” I blurted to no one in particular (although my wife Kelli replied, “I beg your pardon?”). I took a good look at my drill; The bit pointed a straight line in the direction of the center of my palm on the other side. I was about to drill right into my hand, but my own knock-it-off call saved me.

I have called knock-it-off for a variety of reasons in my aircraft build: disconnecting the air hose from my drill before changing bits or even installing the chuck key, disconnecting the air from my pneumatic squeezer before changing squeeze or dimple bits. I even knocked-off my departure for the hangar while wearing flip-flops…I left five minutes later with real shoes to protect my toes from falling tungsten bars.

So I should have called my own knock-it-off back in 2011 as I started rolling my fuselage skin’s edge. I should have practiced on a piece of scrap, setting the tension and nailing the technique…but I didn’t. The tool’s edge guide bit into the skin’s edge, and I gouged a nine-inch ditch into the skin; I was horrified! Luckily, I knew a friend with access to people and equipment who could hopefully fix the problem without having to order a replacement from Van’s. They stretched and compressed the skin and got it back to its original glory with no apparent signs of distress-the rivet holes even matched up.

But I learned my lesson again for the umpteenth time: If it ain’t right, call a knock-it-off.

Note: All references to actual crashes are based on official final publically-released NTSB and Air Force Accident Investigation Board reports of the accidents, and are intended to draw applicable aviation safety lessons from details, analysis, and conclusions contained in those reports. It is not our intent to deliberate the causes, judge, or reach any definitive conclusions about the ability or capacity of any person, living or dead, or any aircraft or accessory.

Amy Laboda - July 19, 2008
0
A month after the engine was first started on the RV-10, author Amy Laboda and her husband, Barry Marz, scheduled a visit from DAR Ray Howell, received the airworthiness certificate, and commenced ground runs. It sounds simple, but so much effort went into getting that little piece of paper.