SportairUSA, LC, the U.S. distributor of Savage Outback, Nomad, Cruiser and Classic and Bobber aircraft, announced the winners of a contest to rename the two airplanes at the 2015 U. S. Sport Aviation Expo in Sebring Florida.

“We originally called them Cub and Cub-S, because they are ‘cub-alike’ airplanes. They were inspired by Piper’s iconic Cub and Super Cub, fulfilling the same mission, but with the benefit of modern materials, technology and equipment.

“Renaming was a risk but we’ve been delighted by the reception here at Sebring for the Outback and Nomad, and we feel that these names do an even better job of reflecting the personality of our aircraft

“We are grateful to the many, many thoughtful people who entered the contest and suggested some great names. We are especially thankful to the three individuals who submitted the winning entries.”

The winners, announced at the air show, are:

The Outback is a light sport aircraft with moxie.

Developed from experience with earlier Savage aircraft, the Rota-powered Savage Nomad is a runway optional light sport aircraft that you can fly with remarkable confidence and economy 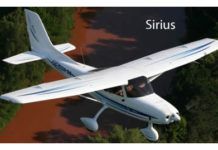