The massive Sherpa homebuilt, which has seen more than its fair share of delays, is flying again behind a new K650 Honeywell turbine, last seen as the Garrett TPE331, producing 740 shaft horsepower. While Sherpa Aircraft has used both the Walter turboprop and the massive IO-720 Lycoming (making 400 hp in nonturbo form), the new aircraft, upgraded from the Sherpa’s original five seats to eight, ups the power ante quite a bit.

According to the company, “The Turbine Sherpa, which has evolved from a series of three metamorphic changes, is the first model the company is now offering for sale. The original Sherpa that caught the eye of the public was a 5-place version introduced at an EAA Oshkosh fly in event by Byron Root and Glen Gordon in 1994. Today, the current version being produced is the K-650T model operating with a gross weight of 6500 pounds.” Useful load is calculated at 3000 pounds. 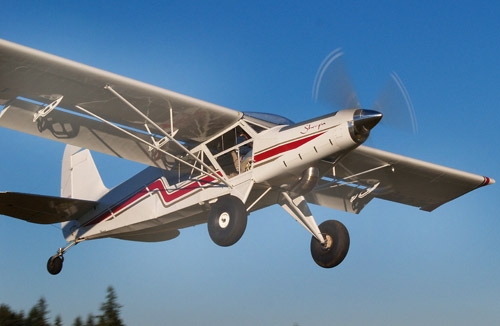 Changing to the Honeywell (nee Garrett) engine provides tangible benefits. “This direct drive geared turbine engine is perfect for Sherpa operations because it offers instant power without delay when working in short field situations,” according to the company. “The propeller rpm of 1591 makes possible the use of a 116-inch three-blade Hartzell propeller that produces amazing static thrust. Fuel burn numbers from tests completed so far are lower than originally expected and show that the -5 engine with the horsepower it produces will operate with the lowest operating costs compared to all other turbine engines.”

Performance is eye-opening with the extra thrust. Takeoff distance at reduced weight have been measured at just 100 feet. The company says the new Sherpa will climb to 16,000 feet in 11 minutes, and cruise at 182 mph at 16,000 feet on 42 gallons per hour. Fuel capacity is 348 gallons.

According to the company, plans are to “construct 12 K 650T aircraft in the first production run. They will be offered in kit form and produced under a builder-assist program at the Scappoose, Oregon, facility with an amateur-built experimental license. Construction time for the production of the kit and final assembly is expected to take approximately 9 months from start to finish.”

The first factory prototype is undergoing its Phase I flight testing now. Base price, including a remanufactured, zero-time engine (with a 5400-hour TBO) is $850,000. For more information, contact Sherpa at 503/543-4004 or visit the company’s web site.