In-cockpit weather, XM-sourced product, radar and Stormscope, all help make suitable Experimentals all-weather conveyances. You can therefore avoid thunderstorms in the summer (and other times, as you so choose). But that leaves ice, the big freeze, nasty stuff that can have a seriously degrading effect on the performance of any aircraft.

Certified aircraft have various certified systems, of course, with rubber boots as the old-school solution and weeping wings of glycol as the newer-age technology; hundreds of Cirruses are flying with TKS anti-icing equipment.

Now For Experimentals, Too

Finally, there’s another option, one being marketed to the high-end Experimentals, called Therm-X. Developed by a division of Kelly Aerospace and an aviation research and development company in Redmond, Oregon, called RDD Enterprises, its been certified for inadvertent icing encounters on Cessna/Columbia aircraft where its called E-vade

Therm-X is an electrical aircraft leading-edge surface de-icing system originally developed by Kelly, a well respected supplier of alternators, regulators and all sorts of other aircraft electrical components. Therm-X has the advantage of no moving parts, minimal maintenance requirements and no need for fluids. It turns electricity into heat, and ice into cold water. Simple as that.

OK, not quite so simple. This new approach uses malleable materials including a graphite foil laminate to create heaters that can be made to fit any GA wing and horizontal stabilizers length and shape. Electronic heating zones embedded within the laminate are powered by a 75-volt/100-amp alternator. This 7500 watts of energy is digitally controlled to progress through the planes leading-edge heaters; that is, it is not intended to heat every surface simultaneously, which reduces current demand.

This juice is under the direction of a digital controller that applies power to parting zones and shedding zones. These two areas are divided so that in potential icing conditions, the parting zone is continuously activated (heated) to melt impinging ice. The ice then runs back to the shedding zone, which is kept below freezing, causing the run-back to refreeze and collect as ice.

Every 60 seconds, the controller activates a de-ice cycle where the voltage is increased to the shedding zone so that the bond between the ice and the shedding zone is broken, and aerodynamic forces blow the ice off of this protected area of the wings surface. This nuance is important, because though the bond in the shedding zone is weakened, it is not melted as it is in the parting zone. The result is that the ice can be blown off, but it cannot run back.

Once the power is removed from the shedding zone, it quickly cools to below freezing so any new ice can reform on it, and the de-icing cycle starts all over again. Simple right? Then why has no one thought of this before? There are three categorical reasons.

1. The level of efficiency, power and robustness only now available in Kellys new compact alternators. Until recently, the alternators that could generate the power were large and heavy-not feasible for most GA aircraft. They also failed with disarming regularity under the constant on/off shunt loads that electric de-ice systems imposed. Simulated tests now show that the new alternators have a life expectancy of 1000+ hours under the Kelly/RDD systems loads.

2. Developments in the leading-edge panel components that are sandwiched to make up the heaters themselves. This laminate comprises a flexible, expanded graphite foil that is the electrical and heat-conducting layer. This foil goes between an outer heat conducting layer and an electrically insulating layer. The flexible graphite can be sculpted such that its density and thickness can be varied so that watt densities can also be varied in length and width to accomplish the necessary ice shedding for any GA aircraft.

The flexible graphite is unusually well-suited in terms of surface area to volume for conducting heat and electricity. This means the wattage required is far less than the wattage required by previous attempts at electrical de-icing. Finally, this malleable and thin laminate can conform to leading edges without materially changing their aerodynamic characteristics.

3. Digital technology. Advances in this area have enabled developers to create small, versatile controllers and components that efficiently and effectively route the de-icing electricity and run constant self-test cycles to monitor the system and warn the pilot if there is a malfunction.

The Nuts and Bolts

Now that you know what it is and how it works, whats involved in an installation and how much does it cost?

Well, before you can zap the ice, you need the juice. A Kelly Aerospace alternator dedicated solely to the de-icing system produces the necessary 7500 watts of power. In a certified Columbia or an Experimental Lancair IV-P like the test plane, this new belt-driven alternator is mounted between the rear of the engine and the firewall. To make room for it under the extremely tight cowling of a IV-P or ES, the RDD crew removes the original battery, swaps this big 12-volt unit for two much smaller sealed Panasonics, and relocates them in a new spot under each front seat. One more thing: The alternator cannot be used as a backup or for any purpose other than de-icing. So if you want your plane to have backup electric power, a third alternator must be fitted.

The wattage is routed to the leading-edge heaters via an assortment of wire conduit, insulated studs and connectors. Its then modulated by a set of heater control modules (HCMs), a group of heat and OAT sensors, and a digital controller. The wire is routed behind the leading edges, and the components are all either contained in the wings, the horizontal stabilizer or the airframe. All thats visible are OAT probes and the smooth silver heater panels. 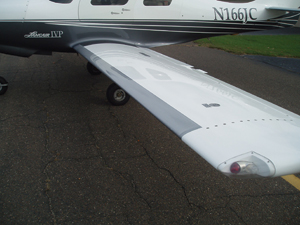 The Therm-X leading-edge panels might look like a weeping-wing setup from a distance, but those are big volts instead of little glycol droplets doing the work.

Once powered up (its usually tied to the avionics bus), the combination of electricity and components is managed by the controller to not only distribute the watts but to systematically self-test the system. To turn it on, you make sure the engine is turning over at 1200 rpm or more and push one button. Integral in that button are three small indicator lights that read airframe and on in green, and fail in red. While the system is going through its 30-second test, the airframe light is steady on and the other two alternatively flash on and off. If all is working properly, the small on and fail lights go out and the airframe light glows a steady, reassuring green.

All the pilot has to do is watch and confirm the systems status. If the lights do not confirm that all is well, you can reset one or both breakers for the controller and/or alternator field circuit and reboot the system. If that doesn’t work, your Therm-X is inoperative and must be attended to by a professional.

If you get the usual steady green light, you then can turn the system off knowing that it checked out. The controller will remember that it already has been checked, too, so when your OAT gauge reads 40 F or less-or you inadvertently enter icing conditions-you simply push the button. Because it was pre-tested, the airframe and on lights go green, and your system is armed and ready. To take advantage of this at-the-ready feature, Ive now made turning on and testing the system part of my preflight routine. Be prepared, right?

One additional feature is that in flight with the system operating, the on light gives you a quick three-flash green advance notice when current is about to be applied to the shedding zone. The flashes are so you’re not taken by surprise when a chunk of ice noisily slides off. Neat, simple and user-friendly, right? To be sure, but getting to this point was a bear. 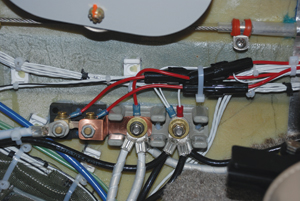 High-current wiring is part of the Therm-X installation; proper techniques are critical to the performance of the system

The Joys of Development

At first, everything performed as designed-and then it didn’t. Alternators threw off or broke belts. Components tested and worked fine for several hours and then became erratic. Software systems suddenly locked up and stopped working without warning. A failure might occur in one operating hour or 10 hours later, but it did occur.

Clearly, it was a long and expensive 2007 for the Kelly/RDD partnership and, in the process, the patience and good will of adventuresome first customers were sorely tested.

One by one, the mechanical demons were singled out and the mysteries unraveled. In the process, alternator specs and designs had to be changed and HCM mounting locations were found to be extremely temperature sensitive, so where the HCMs were located was critical. For example, the HCM mounting spots that worked perfectly in a Columbia lacked sufficient air circulation and could overheat in a pressurized Lancair IV-P. Result: system failure. But only after several hours of otherwise normal performance. As you can imagine, troubleshooting this kind of elusive fault was bewildering and exasperating. Finally, the controller and its software brain were painstakingly gone through to clean up redundancies and simplify operating procedures.

All of this took months of trial-and-error bench testing and then weeks more of expensive and extensive flight testing to work out the bugs. Remember, all of this development was on a system that had already been approved in certified Columbia aircraft. Interestingly, according to Kelly and RDD, their Therm-X systems de-icing capabilities always got rid of the bad stuff, but developing it to be robust and reliable in various Experimental aircraft installations was a challenge. Happily, that challenge was met.

Yes, the system is working. In my experience over the course of the last 15 or so hours of operation, it has performed just like the book says-reliably and seamlessly. Because this is now a typical result, complete kits are being shipped-at $17,995 a pop. Installation cost is on top of that, and RDD supplies a comprehensive manual to guide adventuresome builders. If you want RDD or an RDD-authorized shop to do the installation, figure on an additional $6000 to $8000.

Kelly and RDD are now cautiously optimistic about their Therm-X systems. Theyve sold about 25 as this is being written, and the order book is (finally) building nicely. Furthermore, de-icing systems for Lancair Legacies, Velocities and RV-10s are also in the works.

Now that I have this ice protection, do I still pore over exotic, web-delivered ice forecasting information and avoid ice like the villain it is? You bet I do. Nevertheless, I have seen a bit of rime here and there, and it has departed the airplane just like the Therm-X boys said it would. While its still strictly a get-out-of-jail card, its a card Im mighty glad to have in my metaphorical wallet.

For more information, visit Kelly Aerospace at www.kellyaerospace.com or RDD Enterprises at www.rddent.com.