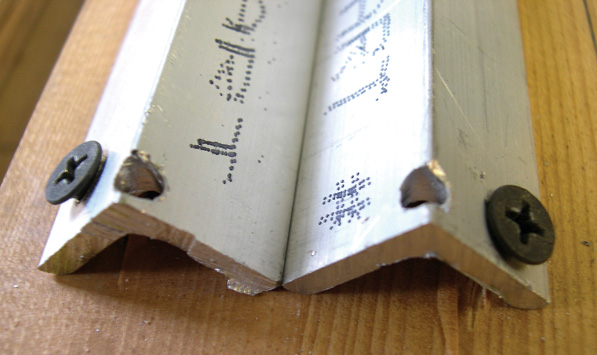 Its as simple as this: two strips of 90 aluminum angle, screwed to a board. Drill the screw holes on opposite faces so that the touching edges are pulled closer together as you tighten the screws. 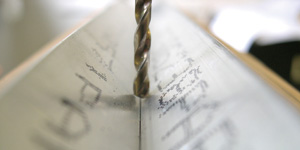 Calibrating the jig, if you can even call it that, is as straightforward as dropping the drill bit down into the valley and sighting along to be sure the tip is in the center. Be sure to rotate the bit slightly so you can better judge the alignment.

Summer seems a long time coming to my workshop in the deep north woods. There’s been lots of rain and blowing scud, which all of us here take as a message from the sender to stay on the ground and work on current airplane projects.

Whilst doing so, I turned the latest plans page and found the next thing on the agenda was to build a pair of pushrods from rigid aluminum tube. The pushrod design is typical of several popular designs: Steel inserts with a threaded stud to accept a rod-end bearing are riveted into each end of an aluminum tube with high-strength blind rivets. In this case, four rivets are evenly spaced around the circumference of the pushrod, so a hole drilled through the wall of the tube and following the diameter line precisely would make the hole on the far side of the tube in the same operation.

Now Ive learned from bitter experience the results of trying to drill a hole in a tube by eye or measurement. You can often get close, or even achieve reasonable results most of the time, but finding the sweet spot visually is, at best, a hit-or-miss affair. 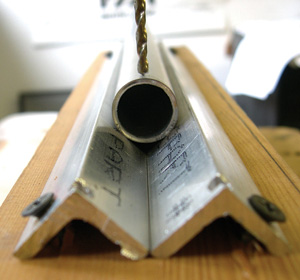 Drop your tube in the jig and work slowly with a sharp bit to keep the tube from wanting to turn. The beauty of this arrangement is that if you’ve centered the bit properly, the tube wont want to slither.

The proper way to do it is with a jig that will both center the tube under the bit in the drill press and hold it there while its being drilled. Such jigs are available from aircraft tool houses and do both jobs very well indeed-but alas there were none in this low-budget shop. Long winters make a man both cranky and cheap. Guilty as charged.

However, there were, down in the scrap pile, a couple of short lengths of x -inch aluminum angle stock and a chunk of square lumber. While the rain dripped off the fir trees and trickled through the moss on the cedar shake roof, I was able to quickly fashion a jig from these and a few drywall screws.

The two aluminum angles were drilled and fastened to the wood block to form an upside-down W. (No, not an M. From a life-long interest in letters and calligraphy, I have learned that an M is not an upside-down W-but we digress.). The block was secured to the wood table cover on the drill press with a couple longer drywall screws, and the whole assembly was carefully adjusted until the drill bit was exactly centered in the bottom of the central V. There, it was clamped solidly.

Nestled into the jig, the tubes centered neatly under the bit and stayed there while the holes were drilled. Within the hour, the pushrods were finished. If you’re half smart, you’ll keep this little jig around and remember the next time you need to drill through tubular stock. Think about all the hot, black coffee you can afford to drink next winter with the money you’ve saved.

Kitplanes - October 4, 2020
0
Eighteen years ago this issue, we put Jack Harper’s single-seat Breezy derivative on the...

Kitplanes - August 18, 2017
0
Whole-Plane ParachutesI enjoy KITPLANES very much and look forward to every issue. But I've...