Anna Mracek Dietrich, COO of roadable vehicle developer Terrafugia, has exciting news for this show. Just before the start of the 2008 EAA AirVenture she finished filing the paperwork for two patents on the electronic folding wing technology that is key to the usefulness and marketability of the company’s Transition roadable aircraft (just don’t call it a flying car!).

“There are a couple things that we’ve incorporated into this design that we have not seen before. One of the big things is the flush lock in the midspan and the root of the wing. It is a t-shaped lock. It is very easy to preflight. You can see it, you can touch it. Being a very tactile preflighter myself, I like that. Of course there are electronic sensors that show in the cockpit, too.”

The root lock is an over dead center lock that pivots around itself but never comes apart into two pieces, and when it is flush, it is locked. You do not have to get out of the vehicle to fold or unfold the wing. “Not having to take a wrench to the wings of your airplane in order to fold and unfold the wings is a big plus. You don’t have to wonder, did I remember to put that bolt back in,” Dietrich explains. “And one of the items on the patent is 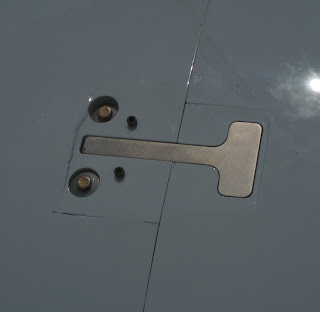 that the outer wing is moved by the inner wing’s motion. There is only one actuator, which means that it is elegantly simple, and also safe. You’ll never run a wing into the ground, and it takes a lot less volume of space around the aircraft in order to safely fold or unfold the wings. We think we can meet pilots’ needs in terms of both convenience and safety.”

The proof of concept vehicle is here for the very first time. It came back from the paint shop just last week, and will be displayed today from 9 a.m.-3 p.m. in AeroShell Square. The company is not currently planning to offer a kit version of this LSA aircraft, however, Dietrich is quick to note that she has learned to never say never.

“The opportunity to display our vehicle on AeroShell Square changed the way we handled our design and building the last six months. We really wanted to have a complete proof-of-concept vehicle ready to display on time,” she explains.

The company has accepted an undisclosed number of deposits from what Dietrich describes as very patient buyers. It is looking for a production facility in the Boston area, near its Woburn, Massachussetts product development shop is located now. She estimates that the company is 18 months from delivering its first production Transition roadable aircraft to a buyer. “There’s a lot of work to do between now and then but it is certainly doable.”

For those of you who want to sample how a Transition might fly, you can download an X-Plane module and try it yourself on your PC or Mac X-Plane virtual flight simulator. For more information go to Terrafugia.