I just received the February 2009 edition and dove into its contents with great gusto. After reading through Bob Fritz’s article ELTs of Tomorrow, Today, I feel compelled to write you in hopes of correcting factual errors in the article.

Bob writes, A 406 MHz device transmits a digitally encoded signal of your registration so there’s nothing to hear. This is incorrect for some, if not all, 406 MHz ELTs conforming to TSO C126. From experience, I can speak only to the Artex and Kannad units, which both emit a properly modulated 121.5 MHz signal during their self-test sequence. A critical portion of the on-aircraft test performed by flight crew remains tuning a VHF com radio to 121. 5 MHz, breaking squelch to ensure it can be heard, and then initiating the ELT test. These tests require you to listen to both the ELTs buzzer as well as the radio, so selecting speaker mode on the aircraft com radio (if available) makes it easier to hear both audio sources..

One other glitch bears consideration for correction. Bob writes, The 121.5 side of the box is doing what it has always done, so remember to do this at 5 minutes before the hour. I believe this statement should be amended to read within the first 5 minutes of any UTC hour.

I always enjoy reading Bobs articles and have found his writing style pretty even-handed. Disappointingly, this article stands out as something of an exception to that rule. It spends a fair amount of ink conveying all the negative information concerning the reliability history of the older 121.5 MHz ELT fleet without a countervailing comment highlighting the upside of 406 MHz ELTs including increased crashworthiness, reliability and probability of successful activation.

In stark contrast, Mr. Cooks sidebar article on SPOT glosses over some pretty serious shortcomings of that product, including its inability to reliably relay a message from beneath even moderate tree cover, or any other time the antenna doesn’t have a clear view of the sky. The glowing praise for SPOT might lose some of its lustre if a more unbiased set of facts were presented.

Keep up the good work. KITPLANES continues to be a valuable resource to the homebuilding community, and a darned good read to boot!

Reader Briggs comments regarding SPOT stem from unpublished testing done by the Canadian SAR organization CASARA. A key issue is the concern that SPOT cannot send distress calls unless it has a clear view of the sky. In my testing, I activated and then successfully tested the various messaging and tracking functions (excluding the 911 feature) with the unit mounted in the airplane parked in a metal hangar with the sliding door one-third open. Ill conduct some additional tests to see if the results were lucky anomalies.-Ed.

I would like to comment on Ken Scotts answer to Dennis Renzs question about the 1915cc engine in the KK-1 homebuilt. They (Ken and Ken) were trying to spend as little as possible on the project and didn’t want to add the cost of a stroker crankshaft. I encouraged them to use a 2100 engine and actually built one for them, but they still opted to use the 1915. Someday the KK-1 will have the 2100 engine in it!

Well, you have done it again. This issue [February 2009] is such that I will be forced to renew my subscription in due course. Roll Your Own caused me to go back and re-read the two preceding articles. Subie Rise Again caused me to speculate. Why go to all that trouble to design and manufacture a PSRU? Why not just install a smaller turbo on the WRX block and reprogram it for 3000 rpm max? It should provide phenomenal torque and be little, if any, heavier than the PSRU engine unit. I am sure there are reasons for not going turbo limited to 3000 rpm, and it would be interesting to hear what negates this approach.

The Back Yard Flyer [February 2009] powered by Harley-Davidson? Give me a break! That was sloppy reporting taken to the extreme. I expect technical articles to be technically correct. A mistake of this magnitude should not have been reported. If reported, it should have been flagged by staff. What gives?

You might want to review your photos of the Back Yard Flyer. No doubt in one of the photos you will notice lettering cast into the rocker covers. It does not read Harley-Davidson, it reads GENERAC. An old, respected name in the portable generator industry.

Dick Starks knows his subject. The editor who inserted the words Harley-Davidson did not. He regrets the error.-Ed.

Eye of the Beholder

Concerning the CH 750 Zenith in the February issue: Maybe Ive seen an uglier airplane in my life, but I sure cant remember when! That airframe looks so draggy Ill bet it takes 75 of that little Continentals 100 horsepower just to keep it in the air. 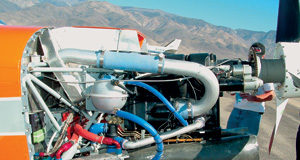 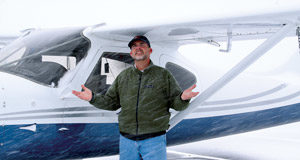