It was that old déjà vu all over again. “Some things never change,” I mused. “I started chasing this freckle-faced, redhead cutie pie 45 years ago, and look at me now. I’m still chasing her.”

Still, I had to admit that things were a bit different this time around. Back then we were both in the same advanced calculus class in college. Now we were in different airplanes flying around an airport. But it’s still just as much fun, and she’s worth the chase.

My wife, Sharon, was in her Airdrome Aeroplanes Morane-Saulnier “L” Parasol replica, and I was in my Graham Lee Nieuport 11 replica. We were in Gardner, Kansas, in the pattern at Gardner Municipal Airport at the 2011 Gathering of Eagles WW-I fly-in, preparing to make a formation pass down the runway. The Morane is the faster of the two planes, so catching up to her for a formation pass down the flight line was a challenge. It took awhile, but after she’d backed off on the throttle I finally got up off her right wing. We made a nice pass down the runway with my smoke system laying out a trail behind us. It was swell. This is what building and flying WW-I replicas is all about. 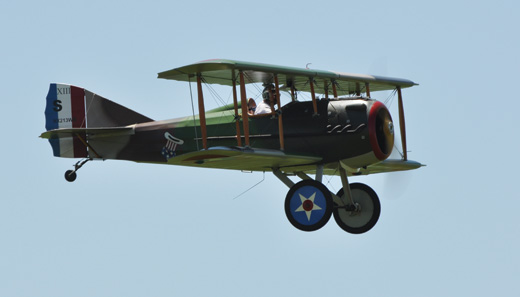 If you are interested in building and flying WW-I aircraft replicas, there are two places to visit besides Oshkosh AirVenture. One is the biennial Dawn Patrol Rendezvous held at the National Museum of the U.S. Air Force located at Wright-Patterson AFB in Dayton, Ohio. The neat part about this event is that you do your flying from a marvelous grass strip laid out behind the hangars, which make up the museum. Flying a pattern around these buildings is an unforgettable experience.

But for builders of WW-I replicas, the best place to go to get up close and personal with the aircraft and their builders is the Gathering of Eagles, which is unique in several ways. 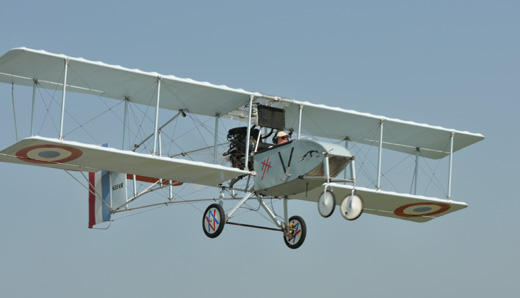 Corey Butcher flies by in his Voisin replica.

First, unlike the Dayton Rendezvous, the planes are not behind a security fence at Gardner. There are no barriers to keep the crowds away, which means actual and would-be builders can crawl all over the planes on the field, and take close-up photos. All of the planes, flying or not, can be examined to your heart’s content. You can get your questions answered and find solutions to problems from the builders who’ve already solved them. I once watched a guy spend 30 minutes on his back under my Nieuport 11 taking photos of the brake installation. He’d driven all the way from New Mexico to do so.

Those with flyable aircraft take to the skies as much as they can at Gardner. But June weather in Kansas is a crapshoot, and sometimes we don’t get to fly at all.

No matter; 90% of those who show up know what the weather odds are. Besides, they don’t attend to see an airshow; they’re there to go to school.

Last year’s gathering was memorable because not only did we get to fly both days, but we also weathered Mother Nature’s fury when a storm blew through on Friday. And we saw firsthand that not only is the WW-I replica aircraft movement alive and well, it’s growing.

The late Graham Lee and Robert Baslee of Airdrome Aeroplanes are the two men responsible for bringing affordable replicas to the world. This “madness” has been global for more than 15 years. Replica builders’ listservs have messages from builders in Sweden talking to builders in Australia. International builders have even traveled to Gardner to take pictures and try planes on for size, but mostly they’re there to talk to the builders and pilots. 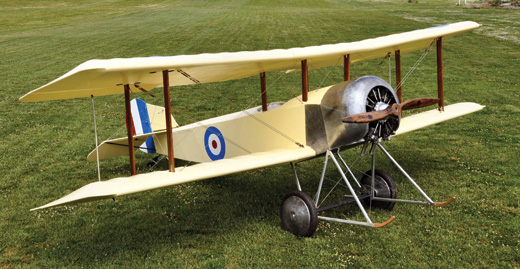 The weather at the 2011 Gardner Gathering was similar to those of previous years. Kansas in June means mind-numbing heat, wet-wool-blanket humidity, and the possibility of a notorious Kansas Big Black Surly thunderstorm popping up at any time.

The weather forecasts for both Friday and Saturday were ominous. Winds were forecast at 20 to 30 mph with a 50% chance of severe storms. Predictions were wrong on the winds but right on the storms; the winds were light and mostly down the runways. 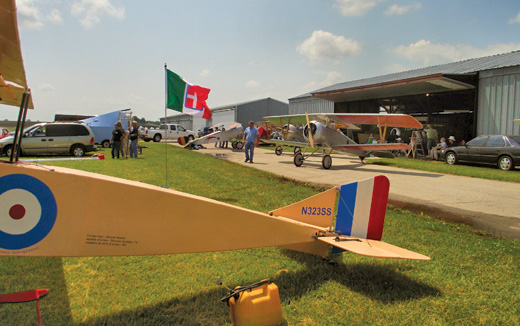 The aircraft assembled outside of Marvin Story’s hangar bring to mind a WW-I airdrome.

Before we even had a chance to head out for Gardner, the Dawn Patrol’s home field in Missouri, Liberty Landing International, was in imminent danger of flooding by the rampaging Missouri River. When the airport owner called and told us, “Get ’em out, boys. We’re going to get hit,” we all sprang into action. The infamous flood of ’93 had caught us by surprise. Our beloved little planes spent three weeks under 20 feet of muddy water. The aftermath was heartbreaking, but with a circle of friends, we rebuilt six planes in only 10 months. It was fun, but not that much fun. We resolved never to be caught like that again. So, after the call came, we had all the planes off the field and onto their trailers the next day. A local farmer, Vernon Petre, and his wife, Carol, became heroes when they offered us the use of their 40×60-foot shed to shelter the planes for as long as we needed. But that’s another story.

With the planes already on their trailers and the river high, we decided to go to Gardner anyway. I’m glad we did. We had the second largest turnout ever. 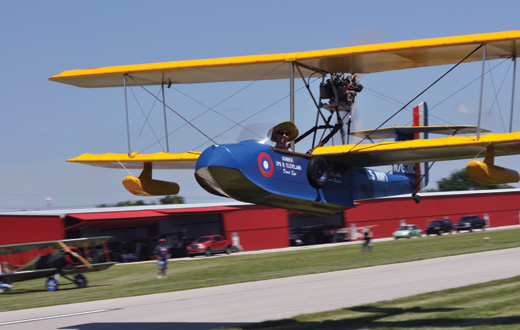 The “Iron Men” from Iowa, Corey Butcher in his Voisin replica and Lorin Miller in his Pietenpol, arrived early Friday morning after a long cross-country flight. One leg of their odyssey, from Corydon, Iowa, to Chillicothe, Missouri, is 68 miles. It took Butcher 2 hours to fly that leg, which is a long time to sit in a scrunched-up position on a plastic boat seat. Been there, done that flying to Oshkosh in the Nieuport. Will never do it again.

Baslee showed up with the fuselage of the newest addition to his stable of WW-I aircraft—a full-scale Sopwith Baby. What a plane! It’s unique in that pilot and navigator sit side by side. 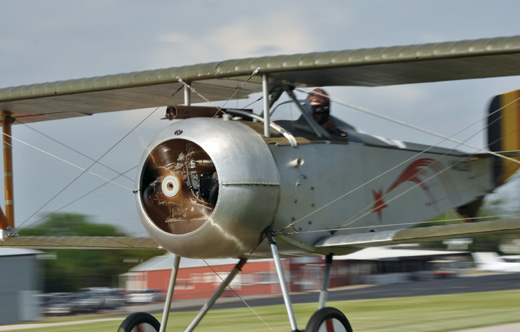 A full-scale project of a Bristol F.2b fighter, a Royal Aircraft Factory S.E.5a replica and assorted others totaled 21 planes on the field, 11 of them flying.

We also had several new models arrive for the first time: Dick Lemons came in his incredible Fokker DR-1 replica and Harvey Cleveland’s just-inspected Mariner Amphibian flew in. They stole the show.

Friday’s weather was forecast to be “breezy,” so Sharon and I decided to take our airplanes over early that morning to assemble them before the winds started howling. When we arrived the winds were light and variable, and our planes went together quickly. The Morane was designed to be the ultimate trailer-friendly aircraft, and usually it takes us only 30 minutes to do the job (45 minutes to an hour with help, if you know what I mean).

Once they were assembled, we sat in our folding chairs talking to new arrivals and watching others put their planes together. Sharon sniffed the air and suddenly said, “This wind is perfect. Let’s go fly.” 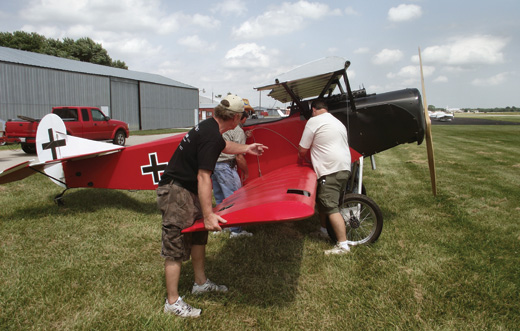 Mark Hymer gets help installing the lower wing on his Airdrome Aeroplanes Fokker D-7 replica. The D-7 is becoming one of Robert Baslee’s more popular kits.

As usual when She Who Must Be Obeyed speaks, I snapped to. We preflighted, mounted up, took off and had a nice hour in the air making passes down the runway. After we landed, Sharon had a line of people waiting to try out the Morane’s roomy cockpit.

For the next several hours, the field in front of Marvin Story’s hangar looked like an open-air aircraft assembly plant. Planes were being put together all over the place. As each plane was finished, it was taken for a short flight to make sure everything was going to be ready for Saturday, Gardner’s big day.

Friday’s barbecue put on by Marvin and Nancy Story is as good as it gets, and the Saturday morning pancake feed with Dick Hartzler flipping pancakes like a wild man is just the way to start the day. And then there’s the traditional Friday afternoon Last Man Standing Combat Plank U-Control Challenge. This is an old model airplane contest in which two pilots, in the same circle, try to cut the ribbon towed behind the other pilot’s combat plank. I’m proud to say that this year I won easily, crushing Rick Bennett’s pathetic efforts. I’m sure I humiliated him so badly that he will probably give up the sport to save himself from further embarrassment. 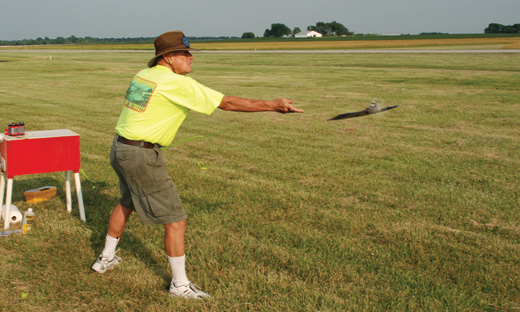 As the day wound down, many pilots grew anxious about the weather forecast: a 50% chance of severe storms. Several groups headed out to Lowe’s, Home Depot and Walmart to look for tie-down stakes. Others flew back to their local airports scattered around the Kansas City area.

Sadly, the predictions were right. That night Gardner had 2 inches of rain with straight-line winds of 70 mph. All we could do, as we were lying in bed that night, was hope there was no hail and that the stakes would hold.

As we drove to the field Saturday morning, we dreaded the turn into the ramp where the planes had been tied down. Well, Huzzah! All but one were still tied down. They were waterlogged, but the stakes and ropes had held, and the planes were undamaged.

Butcher’s Voisin had broken its tie-down lines, moved about 300 feet down the field and, wonder of wonders, damaged only its rudder and aileron. During its travels, it had also damaged the rudder of Marvin Story’s Siemens-Schuckert, but that was all. He was exceedingly lucky and so were we.

Winds gusting to 30 mph on Saturday were supposed to build, but it never happened. We had another great day of flying. 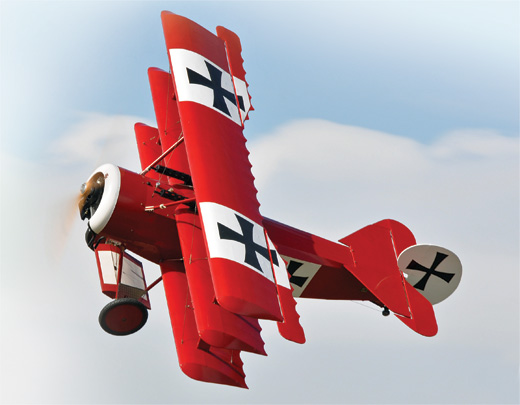 As we loaded our airplanes back onto their trailers as the Gathering came to a close, we were already thinking of next year’s and what we would bring to wow the crowd. And so, back we went to watching the Mighty Missouri River rise as the adventure continues.