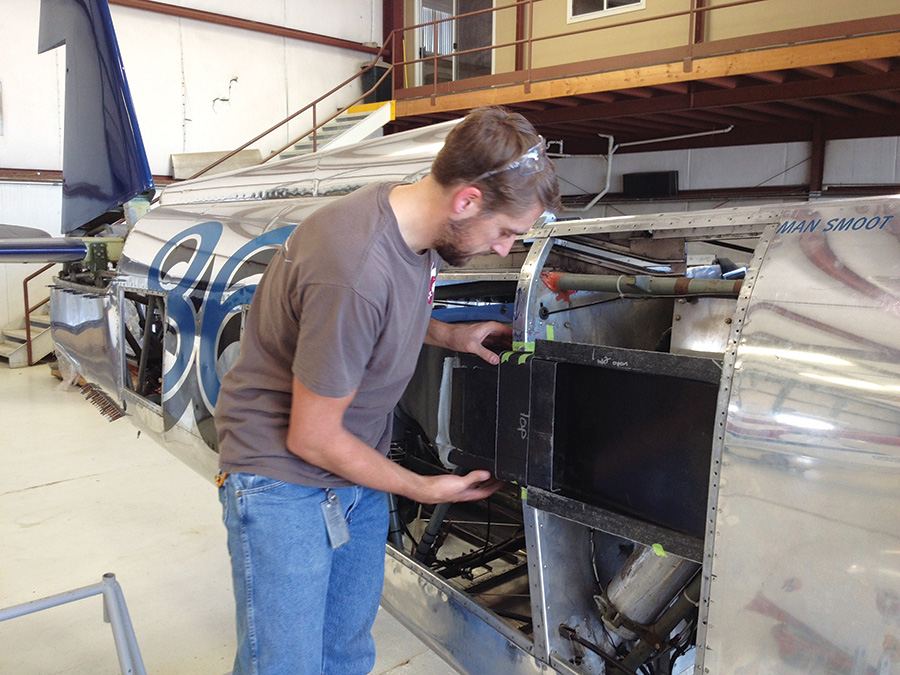 Jake Jacot smiles during the first trial fitting of his parts in the fuselage of Czech Mate.

Last June, Wasabi Air Racing crew chief Jenn Whaley and I were approached by Bryan Kreimandahl to help with an oil-cooling duct for Czech Mate. This racer started life as a Yak-11, a two-seat trainer powered by a 700-hp Shvetsov ASh-21 engine with a gross weight of 5,300 pounds. Back in the ’80s, race pilot Bob Yancey converted the aircraft to a single seat and added a P&W R-2800 making roughly 2,200 hp with a gross weight over 7,000 pounds. It has since been operated/modified by several shops and is easily the most modified racer in the Unlimited class; it therefore has lots of awesome associated comprises throughout. A stock Yak-11 has a never exceed speed of 290 mph, while Sherman Smoot qualified Czech Mate at 452 mph in 2014. 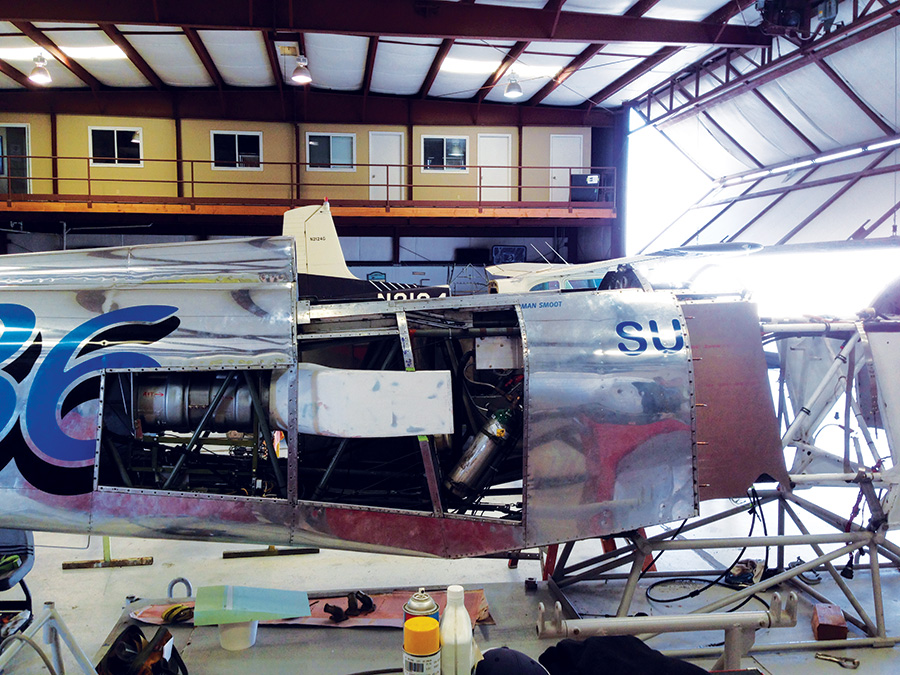 Bryan flew me down to Shafter, California, in his beautiful Scout to check out the project. We landed in Shafter and were met by arguably the best Unlimited crew on the planet, David “LD” Hughes and Lyle Strader, the heart of the crew for the world’s fastest Mustang, Strega. Dave and Lyle also maintain Czech Mate. They showed us around Czech Mate, which had been completely disassembled to repair the landing gear and wing. 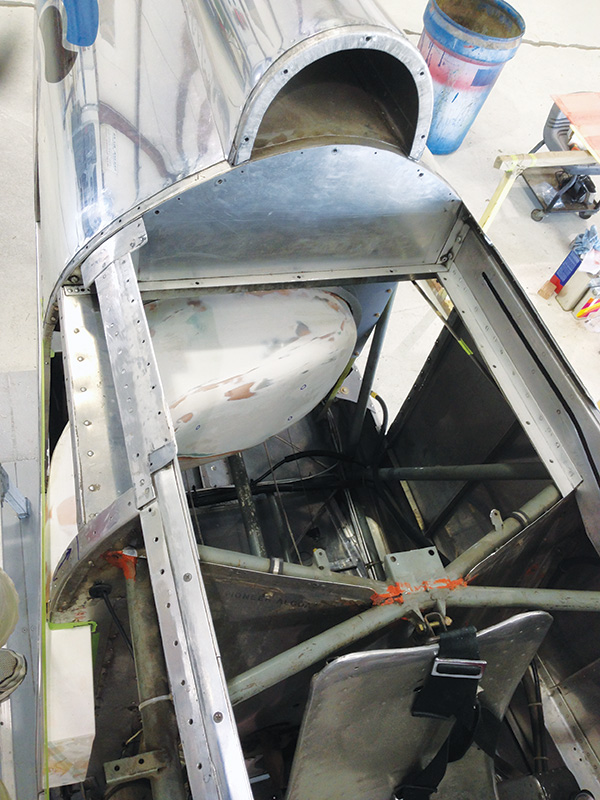 The duct plug in the fuselage for fitting. The seat is visible in the bottom of the photo.

The oil cooler on Czech Mate is mounted in the tail of the airplane pointed forward. The submerged inlet for the oil cooler is on the right side of the fuselage, just aft of the cockpit, and measures approximately two inches by four inches. This inlet feeds a duct that opens up to a 24-inch wide oil cooler—that’s something like 50 to 1 expansion. This large expansion happens over a short distance in order to keep the oil cooler forward in the fuselage for balance considerations. As a result it is very likely that the flow in the duct is separated by the time it gets to the cooler, resulting in an unevenly fed cooler. As a quick fix, LD had installed spray water nozzles for the far side of the cooler, but in general it is just a hard problem. They wanted us to replace the leaky, loose fitting, welded aluminum duct with a sealed, swoopy carbon fiber one, and they wanted to be flying in a month. 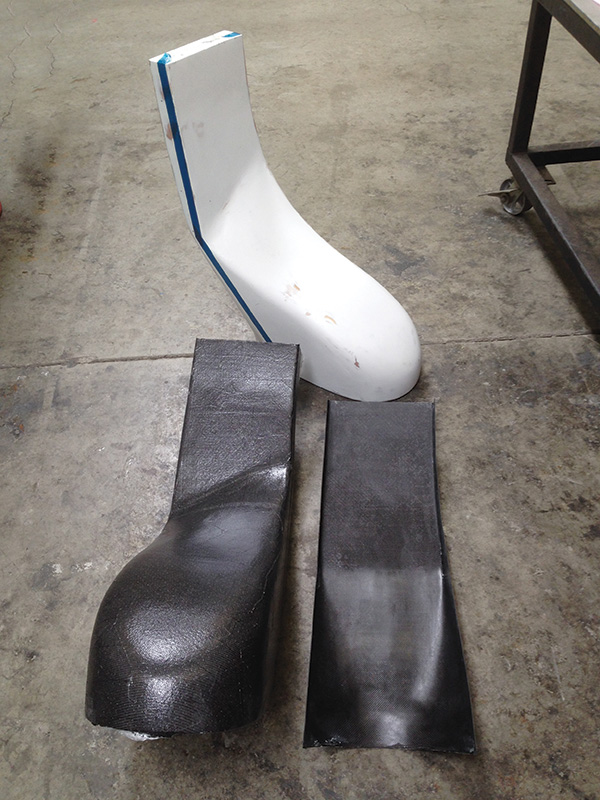 The parts and plug on the floor of the Wasabi Air Racing hangar.

Bryan Kreimandahl is an ex-Skunk engineer with a significant background in structures. Bryan was brought on the project two years ago by world famous thermodynamicist Pete Law, when the wing needed to be redesigned after wingskins were caught buckling on the course in a photo by Don “Bucky” Dawson. Since then Pete and Bryan had been making regular trips to Shafter to work on the little polished racer. So, as a result, this was not just an offer to work on Czech Mate, but a chance to work with some of the best. To make a long story short, we couldn’t say no, but with only a few months until Reno, Jennifer and I were already busy with our own racer Wasabi and helping Andy Chiavetta prepare Lynn Farnsworth’s Race 44. We knew we needed help. 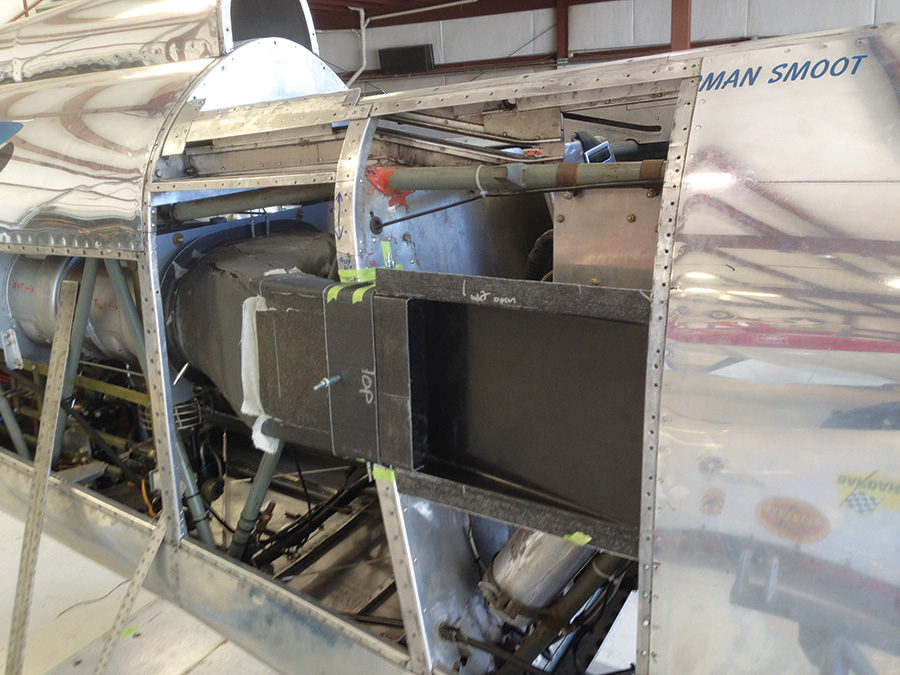 Enter Jake Jacot. Jake works with us at Scaled Composites, where he is an engineer on the rocket motor program. He has only been at Scaled a couple years, but in that time has distinguished himself as a hands-on, practical, engineer that is engaged in his work and willing to go the extra mile. When Jake told us he was excited about the project and would love to help, I was relieved, as it meant we had a chance of getting this all done before the races in September. 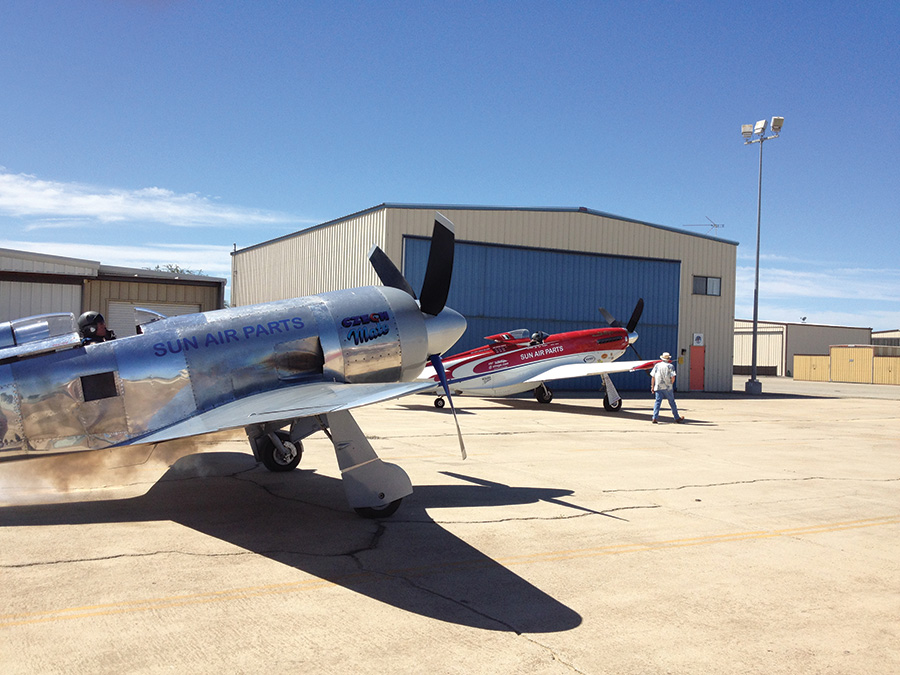 Sherman Smoot prepares for the first flight of the duct in Czech Mate. Tiger Destefani chased in Strega. 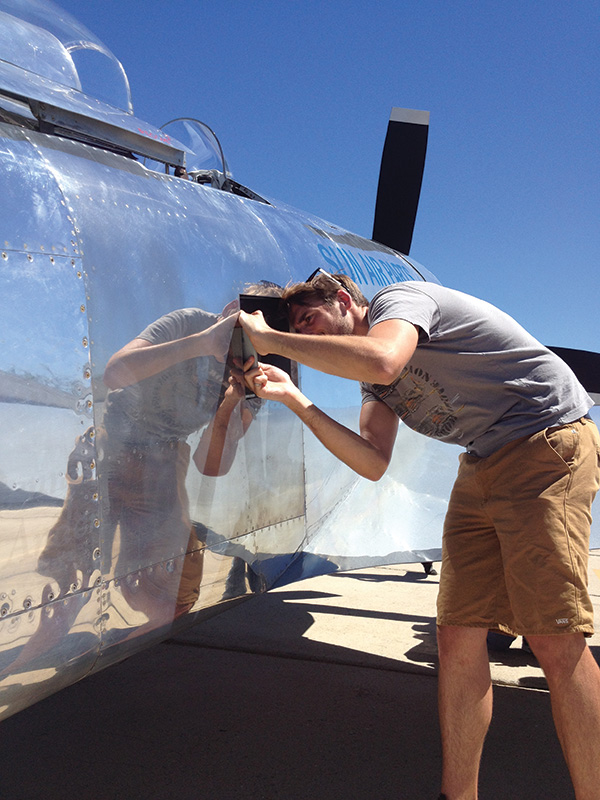 Jake inspects his work during the rollout for the re-flight of the new duct.

Jake took the aluminum duct back to Mojave where we started fabricating a male foam tool. Using MDF he built a skeleton of the duct with a round end for the oil cooler and a square end for the inlet. We then piled home-insulation-type blue foam on this skeleton and roughed it into shape. On top of this we laid a few plies of glass to protect the blue foam from the next layers of Bondo, and finally Polyprime. After a couple trips to Shafter to trial fit the duct, Jake pulled parts off the male tool. Jake built the duct with joints that could be used to take up tolerances in tight spots on the airframe in Shafter, which meant the parts could be fabricated at my shop in Mojave, be transported to the airplane via Cessna 150, and have a chance of fitting in the racer when they got to Shafter.

The parts fit in the airplane and survived the dive testing at Shafter, which meant they got to race at Reno. The airplane qualified at the same speed as the previous year with lower oil temperatures using less water to cool the oil cooler, and Jake got to work on an Unlimited racer! A big thank you to Bryan Kreimandahl and LD Hughes for the opportunity, and to Jake Jacot for bringing it all together.

Reno Unlimited Gold Class is a nasty environment for a relatively young engineer like Jake Jacot to be designing. A forward-facing inlet could see full dynamic pressure on the order of 5 psi, which is 7 times more pressure than a 200-mph plane sees. Add all the unknowns of a highly modified racer and a crowd of thousands to watch your part break, and the result is significant pressure (pun intended). The benefit to already having a part that has survived the flight environment is that the part itself becomes witness to the installed loads. So for a first hack, Jake knew the part had to be about as strong as its predecessor. Even better, with very similar stress allowables between wet-laid carbon/boat epoxy and mild aluminum, if you match thickness, you know you are close. For added conservatism, and because we knew the relative structural efficiency of the carbon was going to be lighter than the welded aluminum structure, we doubled the thickness in carbon.

Jake decided to build the duct parts out of 282 bidirectional 5.8-ounce carbon fiber and boat resin, specifically Pro-Set 125. This is the resin Scaled Composites built White Knight out of, so there is plenty of good knowledge around on the stuff. We released the tools using six coats of green wax and a rubbed-on coat of Partall PVA. We bagged the layups using 10 inches Hg of regulated vacuum pressure and bleeder. With this combination of materials and processes, we were confident that the carbon would perform comparably to the aluminum we were replacing. After trimming, we used the plug to hold the parts in a jig while the Cleco holes were drilled. Once the parts were confirmed to fit in the airplane, we glued the parts together using Cabosil and flox-thickened Pro-Set 125. The external seams were taped for aesthetics and anti-peel.