A number of aircraft have cable-operated controls, particularly for the ailerons or rudder. Figure 1 shows a typical aileron control system that uses cables. They can be simple to design and maintain, since cables can go around corners if there’s a handy pulley in the right place. One of the main benefits of a cable is that since the friction in pulleys is generally low considering the force in the cables, the cable carries the full force from one end to the other. This means that pulleys carry load that could easily be more than the load in the cable itself, since both ends of the cable are pulling on it. 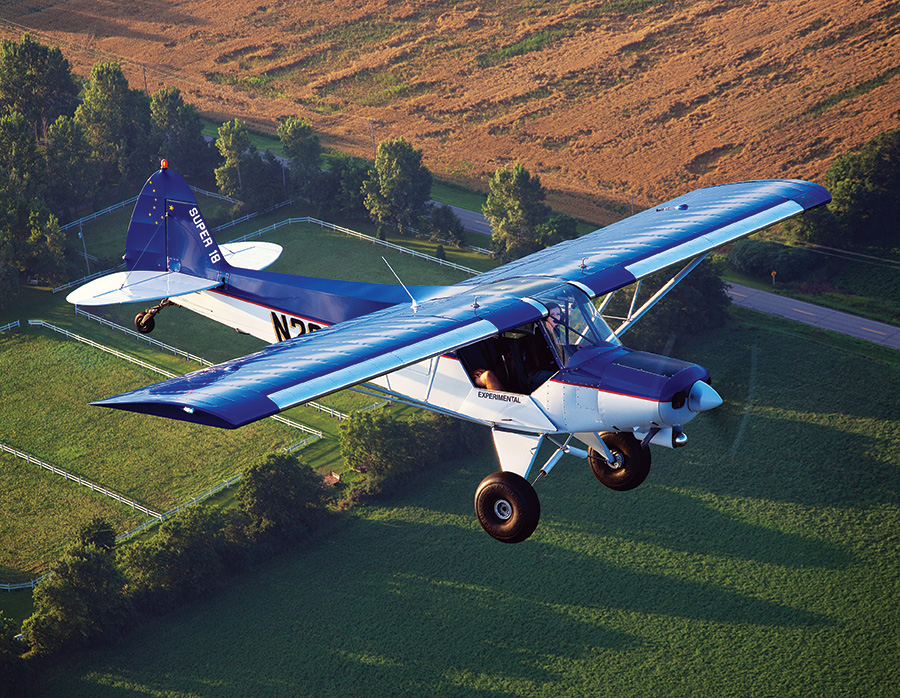 When designing a cable control system, we need to know the load due to the pilot exerting the maximum control force, the load from the aerodynamics, the load from temperature changes, and the pre-tension or rigging load.

Since cables go around the system and return back to their origin, both sides of the control stick carry load. Pre-tensioning the cable (applying rigging load) gives you a cable that you can effectively push by reducing the cable tension, which is equivalent to pushing on it. While you can use the maximum applied force on the control stick to determine the rigging load, using the maximum flight load instead might let you design a lower rigging load. If the maximum flight load is higher than the maximum applied force from the control stick, then you need to reconsider the aerodynamic high moments and lower them because the controls will be excessively heavy and undesirable. That’s an aerodynamics matter, though, and not specifically a structural engineering issue. 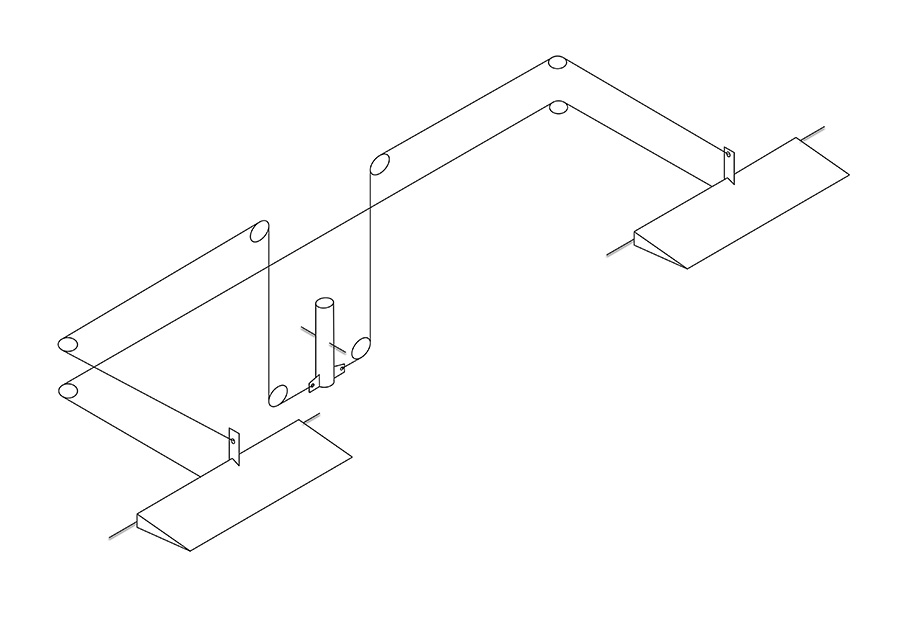 The rigging load should be high enough to maintain some tension during operation, even during extreme temperatures. The cables should never go slack.

Some cables, like rudder cables, are often single-ended. That is, the forward end at the rudder pedals aren’t connected to each other except by the pilot’s foot. They are single-ended because the aft ends are connected by the rudder horn. These usually don’t have rigging loads, but they might have some sort of spring designed to hold the pedal forward and not let it fall backwards. Some springs are also intended to affect the yaw stability of the airplane, but that’s beyond the scope of this article. 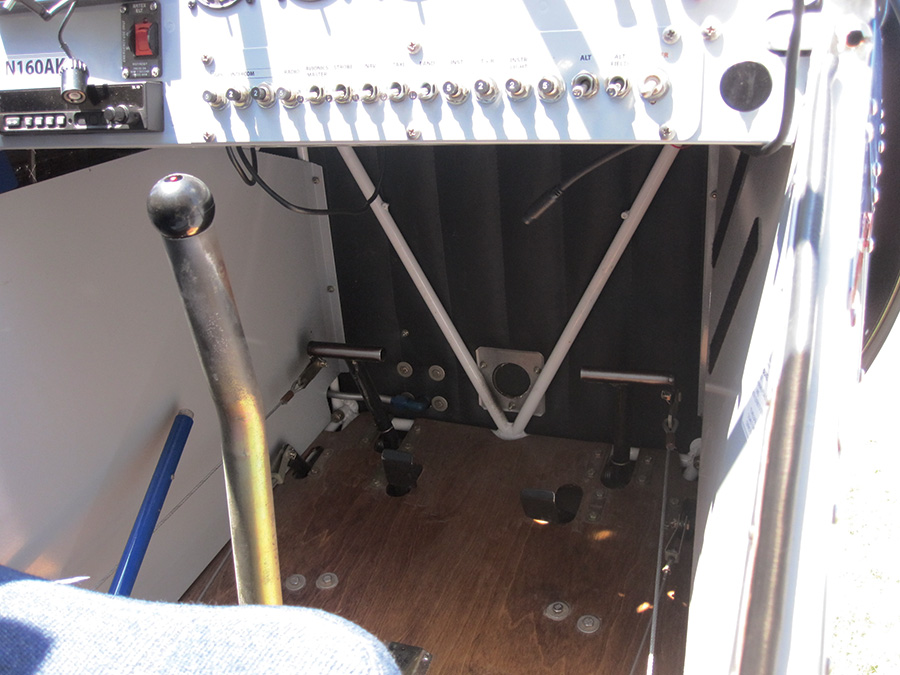 Rudder cables often have relatively simple paths and make a closed system only because the pilot’s feet are on both of them.

There will be some trigonometry to deal with when the control stick is moved side to side when the bottom arrangement gives some differential aileron control. Figure 3 shows a representative control stick with differential aileron gearing. You can see that when the stick is pushed full over, the up aileron cable from the control stick moves farther than the down aileron cable, so this results in a change of cable tension due to this built-in stretching, which is dependent upon the geometry. You’ll have to account for this at some point in the analysis. 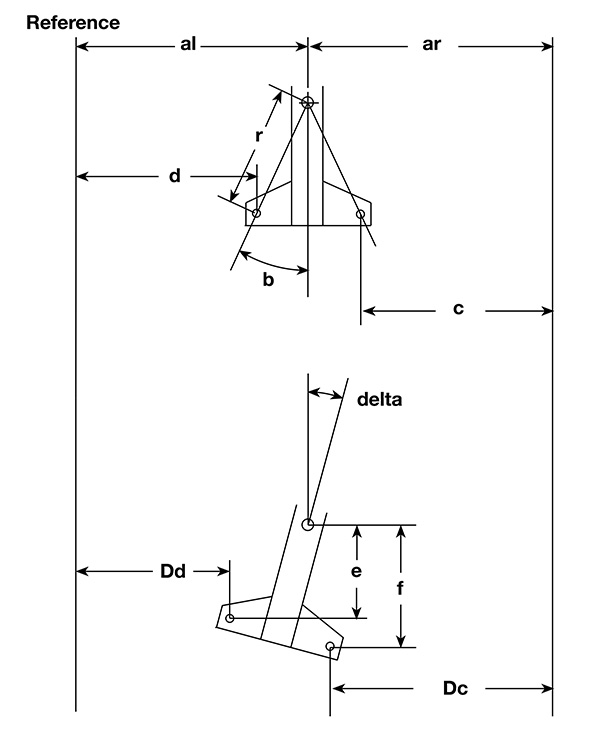 Figure 2: Geometry of the bottom end of a differential aileron control stick.

In Figure 2, the cables are horizontal and they aren’t shown. They extend left and right from the bottom holes in the control stick to the left or right reference line. The top hole is the pivot. If you know the force that the pilot applies to the control stick, then you know the moment M at the pivot. Remember, a moment equals force * distance (from the point you’re calculating the moment about). From that, you can find the cable force F at every position, or at least at neutral and at both extremes, to ensure that the cables always have some tension:

Another issue related to cable control systems is how much tension to preload the cable with. Before we can look at that, we need to estimate the effects of temperature.

The equation below is a simple way to calculate thermal expansion. It’s a rather crude one, though, and assumes that the cross-sectional area of the structure is constant for the length of the cable. Since that’s often a poor assumption, you’ll have to estimate the average cross-sectional area. The equation also doesn’t include the effects of brackets and fittings and that sort of thing, and the effect of those is often surprisingly large. The cumulative flexibility of those might cut the expected force P in the equation in half. Since the force P applies to both the aircraft structure and the cable, that’s important. 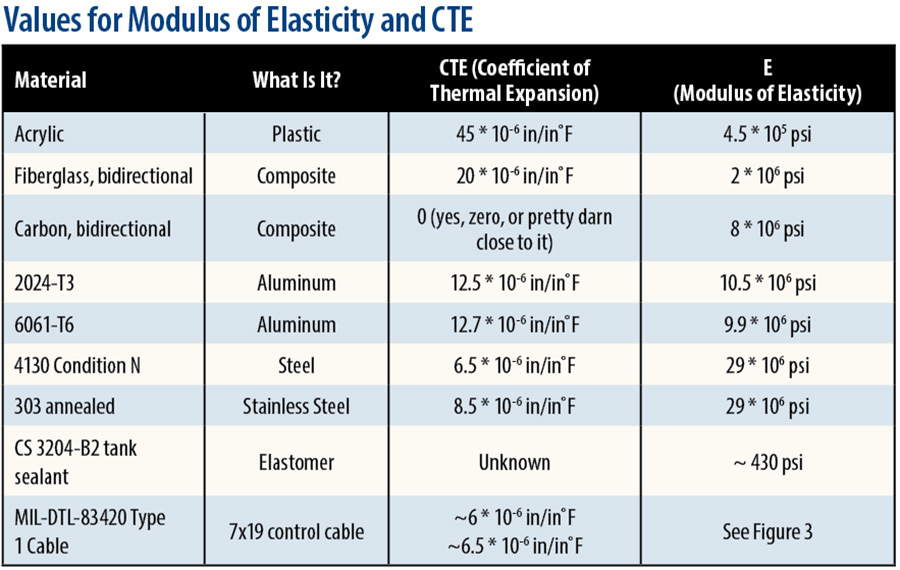 Without going into the math behind it, the equation for the force generated when two different materials are connected together in parallel is:

P = the force generated, which will take us to the preload.
∆T = the change in temperature, affecting both, degrees F.
CTE = coefficient of thermal expansion for material 1 or 2.
A = cross-sectional area of materials 1 and 2.
E = Modulus of elasticity for both materials.

Notice that the length isn’t in the equation. The pieces can be any length for the same result.

Figure 3 shows the stretch properties of aircraft cable. Since the load due to temperatures can occur simultaneously with the load due to moving the controls, they are added together. 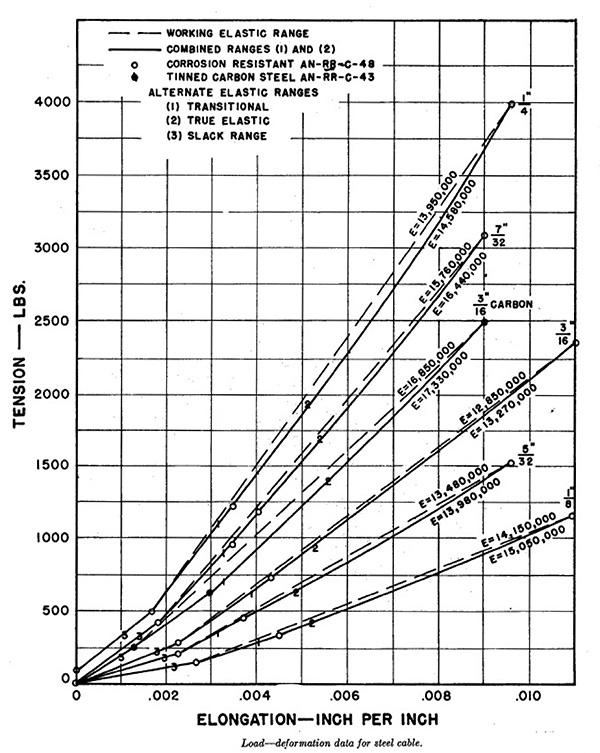 Figure 3: Cable stretch while under load.

The sidebar about the temperature effect on cable tension shows that the tension change with temperature can easily be big enough to be important.

The rigging tension load is intended to ensure that the cable never goes slack while operating the aircraft. If the aircraft structure were flexible compared to the cable system, we’d need to assess it to determine the rigging load. But most practical structures are sufficiently rigid that we can look directly to the cable for that. One simple approach to assessing the effects of the structural deflection of the aircraft on cable tension is to use the method recommended by one of the major aircraft companies. They say that if F is the limit control force on the cable, then the rigging tension should be greater than that. In other words,

It’s desirable to have some margin there, so we’ll include a factor of safety and express this as a margin of safety:

Remember that all margins of safety must be positive.

The factor of safety for rigging might be as low as perhaps 1.2 if you were really confident of all the underlying numbers and your cable tension adjusting process. Otherwise I think something like 1.5 or even higher might be appropriate. But that’s my suggestion. The FAA doesn’t list such a factor of safety for certified aircraft.

Now that we’ve got all the loads, let’s find limit load.

Limit load F is whichever of these, F1 or F2, is higher.

With the cable force known, we can find the load on a pulley. Please see Figure 4. 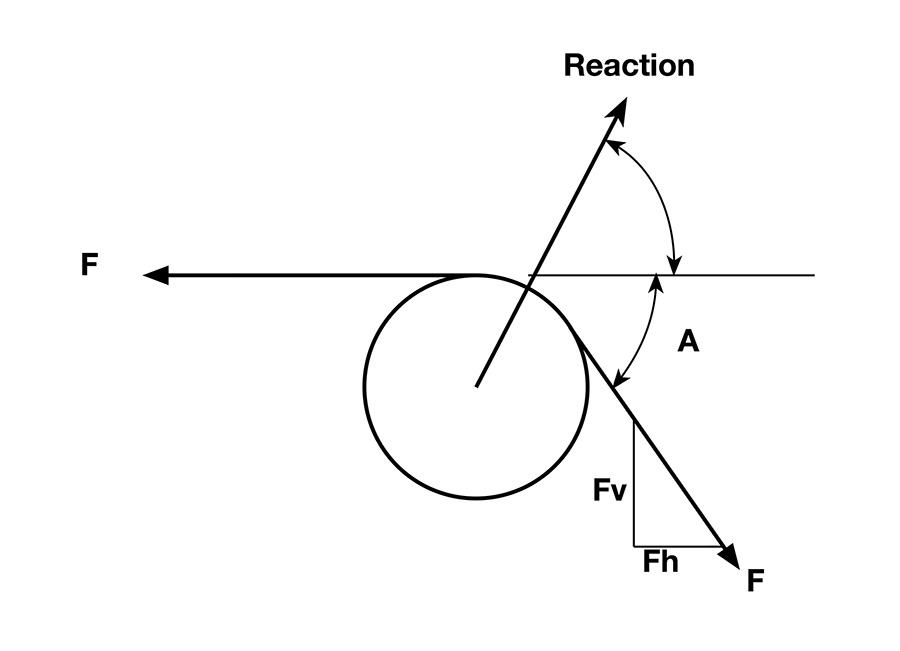 Figure 4: Example pulley and the forces applied to it from a cable.

Looking at the horizontal applied forces, positive to the right, we see that:

The vertical applied forces, positive up, are easier since there’s only Fv.

Using these force components, we can calculate the angle and the magnitude of the force “vector” Reaction. I’m using the full word Reaction instead of just the letter R, to avoid confusing it with the radius of the pulley.

A vector is any quantity that has both a magnitude and a direction. The fuel in your fuel tank, for example, isn’t a vector because it has no direction. It’s simply a quantity. But the crosswind on the runway is a vector because it has a magnitude (its velocity) and a direction. Forces and moments are both vectors. The moments that the cable applied to this pulley are vectors. The left side of the cable pulls with force F on the pulley, acting at the radius of the pulley. Since it’s trying to rotate the pulley counterclockwise, we define its direction using our right hand. The “right hand rule” is a handy way to find the moment’s direction. To use this method, make a thumbs-up sign (curled fingers, thumb pointed out) and align your fingers in the direction of the torque. Your thumb, straight out, points in the direction of the moment vector. In this case, it’s pointing out of the page.

The right-hand side of the pulley also has a moment applied to it from the cable. Now force F is pulling to the lower right, so curling your fingers in that direction, your thumb points into the paper. That’s the opposing moment to the previous one. Since both moments have the same magnitude and opposite directions, and are therefore balanced, the pulley doesn’t rotate. And we learned that we can describe the direction of a moment in a specific manner using the right hand rule.

We can find the direction of the Reaction force using basic trigonometry.

where “atan” means the arctangent of (Rv / Rh). It’s sometimes written tan1, which means the same thing. It’s the angle whose tangent is Rv / Rh. Use a calculator or table to find this value.

And the magnitude comes from Pythagoras:

To do it this way, the components must be perpendicular to each other, as Figure 4 shows. Remember that the pulley has to carry this load, and the pulley’s support brackets do too, as well as whatever they’re tied to.

Much of the aileron control system structural design has to do with the pulleys and their loads. When you’re designing the brackets, remember that in addition to making them strong enough, they should be reasonably stiff, too. You don’t want them moving under load.

Refer to Figure 2. The top sketch gives us all the geometry that we’ll need. The bottom sketch shows us how the bottom of the control stick moves.

The reference lines are located where the cables would rest on the pulleys on each side.

As we’d hope, these are the same:

With the basics out of the way, we need to see if the cable stretches or goes slack when the ailerons are moved.

In other words, the cable system gets tighter as the control stick is deflected.

With this we can estimate the elongation for the chart in Figure 3:

This is very low, approximately 25 pounds force, according to the chart in Figure 3.

ΔT = -100 F Max temperature change from the assembly temperature; in this case it’s a change for the colder. I’m using F to stand for degrees Fahrenheit.

Find the force generated between the airframe and the cables:

It doesn’t matter which material is number 1 or number 2. We know that the aluminum changes more with temperature than the cable does, and with the temperature dropping, the cable will get slack unless the preload is at least this much.