After more than 20 years of various and memorable adventures, wed finally decided to experiment with our Experimental aircraft. During those two decades, Im chagrined to say, the Dawn Patrols planes became intimate with the major agricultural grain products of the Midwest. Yep, we’ve all had several exciting, not to be forgotten, involuntary detours into corn, soybeans, oats, wheat and a particularly memorable adventure in a pumpkin field. 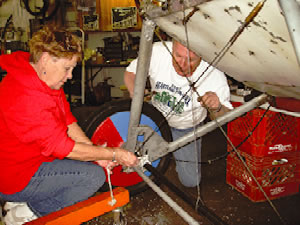 Sharon Starks and Tom Glaeser get ready to earn some blood blisters installing the bungee shock cord to the planes right gear leg and axle.

Many of these expeditions were the result of a momentary mental lapse upon takeoff when wed forget that most necessary of control inputs that we like to call the Nieuport Stomp. It goes something like this: Frantically shove the rudder bar to the stop on the left and pray… pray… pray!

The Nieuports elevators are quite large and very effective. The rudder is quite small, and there’s no vertical fin. Push the stick forward too fast on the takeoff roll before the rudders had a chance to bite, and you’re setting the stage for some real seat-cushion-munching excitement.

Its easy to raise the tail when starting the takeoff roll. In fact, Tom Glaeser, the lightweight member of the Dawn Patrol, can raise his planes tail off the ground while sitting still with the brakes on. Wed all finally become acclimated to the idea that youd better wait till the tail comes up all by itself before adding just a bit of forward stick so you can see down the runway. If you wait for the tail to come up, then takeoff is a non-event.

Landings are about the same. If you three-point onto the ground, landings are pretty tame. But if you do a wheel landing and try to keep the tail up too long and the rudder quits biting, then off you go into the beans again.

Nature of the Beast?

Wed all gotten used to this little foible with our planes. But the question of their twitchy ground handling still remained and was discussed a lot. Tom and I had noticed with our Cessna 120s that we could push the throttle and yoke forward at the same time, raise the tail immediately at the start of the takeoff roll and, using little rudder waving, have a nice sedate non-event takeoff.

When wed all attended the late Frank Ryders WW-I aircrafts rendezvous in 1994, wed observed one of Robert Bullwhip Baslees WW-I replica aircraft takeoffs. We stood in wonderment as Harvey Cleveland, in Roberts Fokker D-VIII replica, shoved the stick and throttle forward together, raised the tail immediately, and without a single swerve or Fokker Stomp, headed straight down the runway to an uneventful takeoff.

How can he do that in a WW-I replica? Inquiring minds wanted to know.

But our little planes were flying OK, so we put the question aside for the next 13 years. We were content with having to occasionally take time out from flying to clean certain grain crops out of our landing gear, buy new props, placate and soothe outraged farmers and perform some minor aircraft frame and fabric repair. We thought it was part of the master plan when flying this type of twitchy little WW-I aircraft.

One day, in 2007, Harvey was at Liberty Landing International Airport giving rides in his Champ to anyone and everyone who wanted to go up. I asked him if hed like to take my Nieuport up for a flight to see what a great little plane it was.

Harveys a CFII, A&P, IA, glider rated, MEI, seaplane rated andATP. Hes logged more than 23,000 hours in hundreds of different aircraft, 22,000 of those single engine. He test-flies all of Bullwhips creations. He is the man at Liberty Landing International and our go-to guy if we need to get a question answered.

Well, it took Harvey three times to get my Nieuport off the ground. On his first takeoff roll I knew as soon as I saw the elevators go to full down when the throttle went in that maybe I should have told him about the Nieuport Stomp. But the crops had just been planted and the field was bare, so the detour into the field was a non-event. The second try was a little better, but he still aborted the takeoff roll and went back to try again. The third time was the charm and he gave it a really good flight.

The landing was easy, and Dick Lemons and I were standing by the hangar when Harvey taxied up and braked to a stop. After shutting the engine off, he looked over at us and said, I cant believe you guys have been flying these planes for so long and not rolled them up into little bitty balls. This is the hardest plane to control on the ground Ive ever flown.

After hearing that, Dick and I started to strut around, thinking we must be two of the biggest, baddest smoldering boulders to ever strap on a Nieuport. Then Harvey told us that he had never flown a plane that was so out-of-balance on the ground. Your landing gear is way outta place, he said. 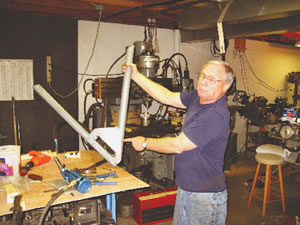 Tom shows off the first modified gear. This took about 3 hours of arguing, insults, scratching our heads and a four-pack of Guinness stout. The second gear leg took 20 minutes. The next two were both done in 10 minutes each. R&D takes a long time!

So we started to ask questions and look around to see what he was talking about. First we made another of our infamous road trips over to Bullwhips plant in Holden, Missouri, to measure where he put the landing gear on his planes. That was a revelation. In the comparable aircraft that he builds, the axles were all 5 to 6 inches further back than ours were. We pondered that for a while. Searching the Internet pretty much confirmed what Harvey had told us. Our landing gear was located too far forward. We werent even close to the standard 15 angle from the aircraft CG to the ground.

While we were at Oshkosh in 2008, we ambled down to see our other guru, Gene Smith of Valley Engineering. Over the years, he has designed some nice, easy-ground-handling aircraft. We picked his brain on landing gear placement, and he said his rule of thumb was to put the axle on the leading edge of the wing. (Were talking taildraggers here, by the way, and aircraft with straight wings.) Gene also mentioned the 15 thingy.

He looked at me kindly and patiently said, But your wings are swept back, aren’t they?

Then the light dawned. Not real bright, but there was a glimmer. Our axles were right under the V of the leading-edge spar. That was not the basic leading edge of the wing. Gene said to measure from the V to the tip, divide by two and mark both leading edges at that point. Then, with the plane in level flight configuration, drop a plumb line and draw a line from where it hits the floor across to the other mark on the floor from the other plumb. That was a good guess as to where out aerodynamic leading edge was. Guess what? That was exactly where Bullwhip had placed the axles on all of his replica aircraft with swept wings.

That did it for us. As soon as we got back from Oshkosh, Dick Lemons swung into action and moved his axles back 5.5 inches from where they had been. The results were miraculous when Dick went out for his first flight. Still not being sure what the results would be, he made the typical three-point takeoff and made a couple of wheel landing touch-and-goes to get the feel of his new plane. On his last landing he touched down on the mains, slowed down, and with the tail still high in the air, at a walking pace, passed by the amazed group standing beside the runway. We would never have been able to do that before. Wed have been in the beans for sure. Then Dick made a few takeoffs, popping the tail up a lot sooner than we ever could before as soon as he hit the throttle. No Nieuport Stomps were observed. When he finally came in and gave us his PIREP, he was a believer, and so were we.

Tom and I decided to get right on it and do ours together. It only took three days! The front landing gear leg stayed the same. The rear leg was shortened about 5 inches. The axle was moved back 5 inches.

Yeppers. No more will we be the entertainment committee when we go to air shows and fly-ins. Were just the plain old Kansas City Dawn Patrol with some really neat, inexpensive, easy-ground-handling WW-I replica warbirds. Life is sweet.

One Piece at a Time