Imagine this scenario: Honey, guess what! While I was traveling in Oregon, I took a ride in an airplane you can build from a kit. It was fantastic and I bought one. It only cost about $40,000 (to start with), and we can build it in the garage. You can be my partner!

She responds, What? You’re not serious. You know how I hate little airplanes. Im never getting in one, and I don’t want you in one either. And how are we going to pay for it?

Fortunately, this is not how most projects usually get started, but did you ever really consider why so few women are seriously involved in homebuilt airplane projects? I have never expected to see a balance between men and women in homebuilding, yet I have often wondered why there aren’t more equal partnerships evidenced by the husband and wife each being deeply involved in the building process.

As you look around at people you know who are building airplanes, ask yourself how many are involved in true husband and wife partnerships as compared to those operating with a spouse who, though supportive, really isn’t in the picture in a meaningful way. Setting aside the rare relationships in which one spouse simply doesn’t care about the others project and where cost is not an issue, there must be some discussion and involvement on the part of each spouse before initiating a homebuilt project. As I have asked around, a surprising number of builders (admittedly, all men) do describe their spouses as partners in the building process, but the interaction, interest and knowledge of the project on the part of the partner spouse tells a different story.A True Partnership?

As a man undertaking a building project with the expectation that his wife will be an enthusiastic helper, consider his feelings about a potential role reversal. What if your wife decided to sew up a line of dresses, shirts and coats and offered to make you (the husband) a partner? All you need to do is sit with her while she sketches and sews, occasionally handing over the scissors. In return, you get to learn how to run the sewing machine (on inexpensive materials), clean up the scraps and brag to all your buddies that you are now becoming a dressmaker.

Take a moment to imagine the enthusiastic reception and the powerful feelings of self worth (or not) the responses of your friends would generate. As a good husband, you are probably thrilled at the opportunity, but even if you are not, you should be able to see your homebuilt project from her perspective before expecting to get the support you want and need.

One could write a book investigating the social implications and stresses of a wifes involvement in her husbands homebuilt airplane project. Im not saying it has to be a bad thing. In fact, it often is a rewarding experience for both the husband and wife, but can they really be equal partners in the eyes of friends, family and each other? Unfortunately, assumptions exist about a womans very ability to make meaningful contributions to such a project, often resulting in contributions that are limited to phone calls and the occasional supplying of a tool. The husbands belief that the wife will enjoy working on the project once she gets involved in it and realizes how much fun it will be for both of them is exactly analogous to a wifes assumption that her husband will enjoy the dressmaking once he gets involved.

Personally, I find that women are socially conditioned to be more realistic when it comes to such expectations. My husband and I find that, when in the company of other builders or want-to-be builders, there is reluctance to accept that a woman would be building an airplane. When someone discovers that I am a builder, that person (usually a man) will most often turn to my husband and ask, What engine are you putting in it? or What made you decide on…?

My husband, Bill, has participated in every aspect of the many decisions that precipitate from the initial decision to take on building a Vans RV-7A. Both of us participating in a meaningful way has made it work for both of us. My husband does most of the parts ordering and often does the research when issues arise. He handles most of the technical issues around my builders web site and responds to email when Im overloaded. He helps with construction in meaningful ways, and I take advantage of his superior knowledge of electronics and certain engine and other firewall-forward tasks. He calmly deals with others who consistently turn to him alone with questions about the project, rarely showing his frustration. He is truly a partner in the building process. What is different about his participation is that there is no question on the part of friends and other builders that he is a partner.

At a recent fly-in, after a discussion of my experience with building, another builder turned to my husband, saying, You’re really lucky to have a woman whos interested in your airplane. My husband and I were able to share the humor in this builders mindset without taking it too seriously. It does provide an example of one of the social obstacles facing a woman who wants to be a partner on a building project. There are women building airplanes on their own and as full participating partners with their husbands. When they cant be taken seriously by the homebuilding community, what chance do women who are reluctant partners have?

What I have learned from being a woman building an airplane and what I think every man who sincerely wants his wife as a building partner needs to understand, is that women will be better partners in a husbands building project when they clearly recognize their own value as partners, in addition to being valued by their husbands and others. It would be best if a womans value could be recognized by friends and the building community, but it must be recognized by her spouse. That is a tall, perhaps unachievable, order in many relationships, but frequent discussion between partners is a good start. If the words are encouraging but the attitudes are not, the contributions are devalued and the atmosphere is soured with the result that enthusiasm goes out the window. People are well conditioned to recognize any mismatch between words and actions. I convey my attitude toward the RV-7 building project by telling my husband, I really want to do this, but I cant do it without you. I sincerely mean that.

Rick Lindstrom - August 19, 2007
0
Builder Rick Lindstrom’s Zenith Zodiac 601 XL project continues as he discusses the successes and setbacks he experienced along the way to the first flight; by Rick Lindstrom. 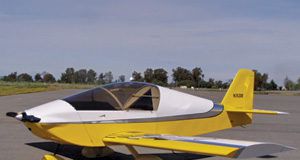