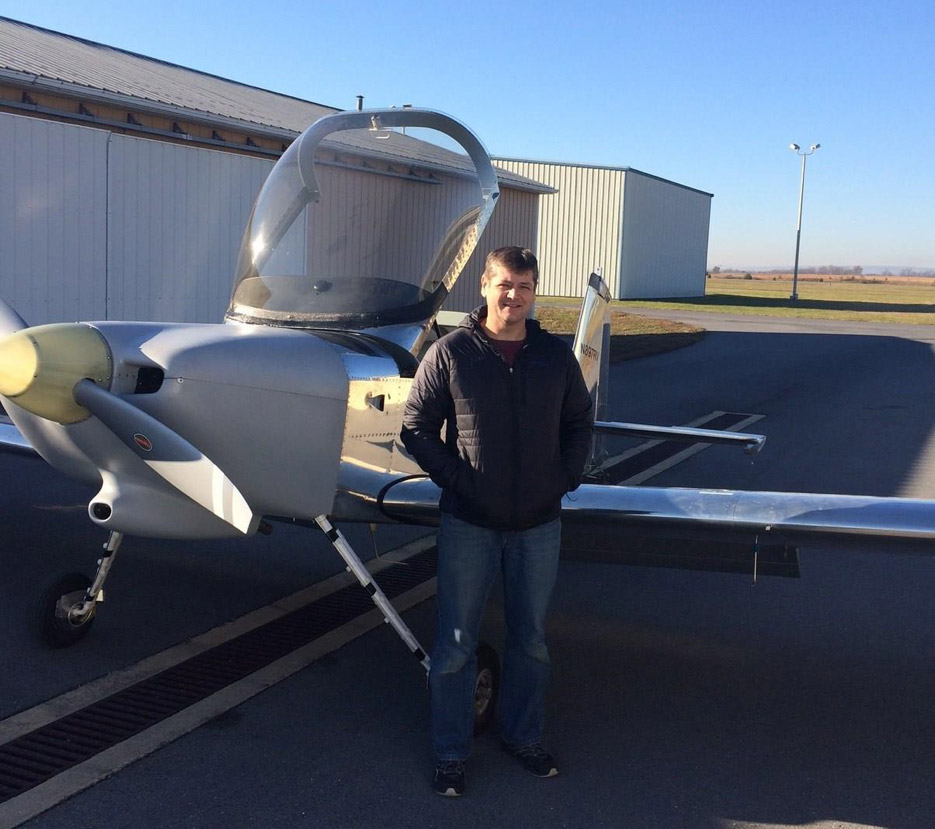 Congratulations to David Porter, who recently reported the first flight of his RV-7 and became the official 10,000th Van’s RV aircraft to transition from a collection of parts and take to the skies. We say “official” because there are certainly more than 10,000 flying, but we don’t know about all of them. Many builders have taken to the air and, doubtless, the thrilling experience caused them to overlook alerting anyone at Van’s.

Mr. Porter lives in Martinsburg, WV and spent 3 1/2 years building his RV-7 from a standard kit. It’s the first airplane he has built. He’s also the President of EAA Chapter 1071 in Martinsburg, where several members are also RV builders and pilots. Serial number 74311 (the 4311th RV-7/7A empennage kit sold) is the 1,662nd RV-7 to fly, and a splendid example of the marque. It’s fairly typically equipped for a modern RV, with a Lycoming O-360-A1A, Hartzell blended airfoil prop, GRT/Garmin VFR avionics and seats by Flightline Interiors. His first flight was on November 24th, 2017.

David is an experienced CFI, but a relative newcomer to the RV world. As he says: “I had never considered building an airplane until one day in late 2013 when I got a ride in the back seat of an RV-8. It was my first time in an RV, and I was amazed by the performance. I immediately started running calculations about whether I could afford to build an RV. Before long, I ordered an empennage kit and sold the Piper Warrior I had owned for several years.”

Cirrus, the leader of the certified single piston pack, will deliver around 300 airplanes in 2017, so the “distributed production” of RVs is the largest addition to the worldwide piston fleet each year. Van’s continues to democratize general aviation, to offer as many people as possible the opportunity to experience affordable RV “Total Performance”. RVs have flown around the world, over both poles, and in more than 50 countries.
None of this would be possible without the dedicated efforts of thousands of builders, each one with their personal dream to fly an RV that is uniquely their own. Van’s can supply the raw material, but our customers provide the blood, sweat and tears that transform those parts into flying aircraft. Thanks are due to all RV builders, whose work has changed the world of personal aviation.

Dick Van Grunsven, founder and CEO commented: “If we step back and take a historical view of the RV phenomenon, we realize that “RVs” have been part of the aviation scene for over half of the “personal aircraft” era which began in the late 1920s. Over that period RVs have morphed from interesting fringe area curiosities to GA mainstays. Credit is due both to the dedicated and talented staff at Van’s Aircraft and to the thousands of aviation enthusiasts who had faith in the perhaps understated performance and value of our traditional designs. I cannot overemphasize the importance of the countless builders and pilots who have supported each other, and created a community that is now an aviation icon. Together, we have advanced the enjoyment and safety of personally built aircraft. On this strong foundation, I see no end in sight to the growth and energy the RV community is offering to GA.”

We look forward to the next 10,000. At current rates, that should take only about half as long as the first 10,000, so watch this space in 2040 or so. We’re confident that Van’s will be there, and that plenty of RVs will still be delighting their owners, and taking new generations of builders into the sky.

For more information on the most successful line of kit-built aircraft in the world, visit www.vansaircraft.com .

Ed Wischmeyer - July 14, 2011
1
This Starduster Too is more than just a smart-looking biplane with unique elliptical wings and eye-catching paint. Careful reconstruction and modifications have made it into one sweet-handling ride. By Ed Wischmeyer.

Tom Wilson - August 10, 2012
0
As electronic ignitions become more popular, some homebuilders will want to consider making the switch (especially given the potential savings in fuel costs). Tom Wilson provides an overview of the marketplace and offers a “cost-benefit” analysis.