Burt Rutan is not the kind of guy to play by arbitrary rules. And when he’s had them forced across his desk, he has a long and glorious history of turning them upside down and decidedly to his favor. Where other designers see a straightforward challenge, Rutan saw (and still sees) an avenue no one else does.

Case in point? The Catbird. Also known as the Model 81, the Catbird was, in part, a response to the challenge handed down by the CAFE Foundation in the 1980s to design and produce more fuel-efficient aircraft. CAFE’s signature competition, called Competition in Aircraft Fuel Efficiency, was first held in 1981 as the CAFE 250 and expanded the next year to run 400 miles, earning the new name of CAFE 400. The last CAFE 400 ran in 1990. 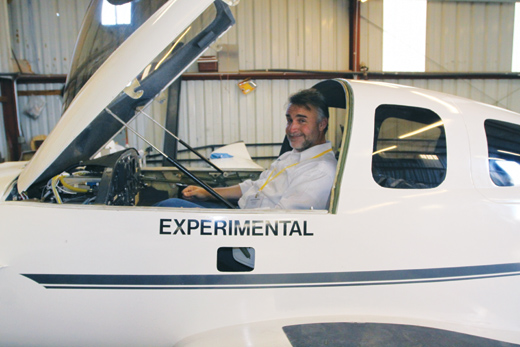 The author in the Catbird seat.

The goal of the CAFE races was to accurately measure aircraft performance from many standpoints, not just speed. For example, to score well in CAFE competition required a fine balance of speed, fuel efficiency and payload. The CAFE 250’s formula was overall speed times miles per gallon times the square root of the payload. Aircraft with more than one seat could carry up to 200 pounds in each seat, up to the specified maximum gross weight of the aircraft. Most competitors flew with a single pilot and ballast to represent passengers (safer, less whining).

By the time the Catbird was ready to compete in the CAFE competition, the formula had been altered. Now it was speed to the 1.25 power times fuel efficiency (in mpg) times payload to the 0.75 power. An alternative way to calculate a CAFE score is: speed times mpg times payload times the square root of speed over payload. You can see the mathematical influence given to payload to offset what should be a loss of efficiency to the cabin needed to carry that payload.

No doubt Rutan saw the significance of this calculation as the Catbird came together. Although it was ostensibly designed as a personal transport to replace his twin-engine Defiant, there had to be more to the choice of five seats than shuffling people across the country.

That extra seat would do wonders to inflate a CAFE score.

Indeed, the only way to get five seats to work in the airframe size envisioned was to click over to the unconventional. The airplane gets its name from the seating arrangement, a central pilot’s perch ahead of two forward-facing passengers at his elbows. Behind, entering through a separate door, are two aft-facing seats. The single canopy swings up to provide relatively easy ingress to the cabin for the front seaters, though the pilot has to stand on the outboard seat bottoms and wriggle across.

Bottom line: The Catbird, competing in the 1988 CAFE 400, trounced the competition, posting an all-time-high score of 2.75 million points. The second-place airplane was Gary Hertzler’s VariEze, which made 49.25 mpg flying 152 mph; because it was a two-placer, it lost in the payload column, scoring only 2.36 million points. Gene Sheehan’s Quickie Q200 and Klaus Savier’s VariEze were close behind, with 2.32 and 2.28 million points, respectively. In raw numbers, the Catbird ran the 400-mile course, which included a mandatory climb to 7000 feet MSL, at an average speed of 192.3 mph using an average of just 8.9 gallons per hour. 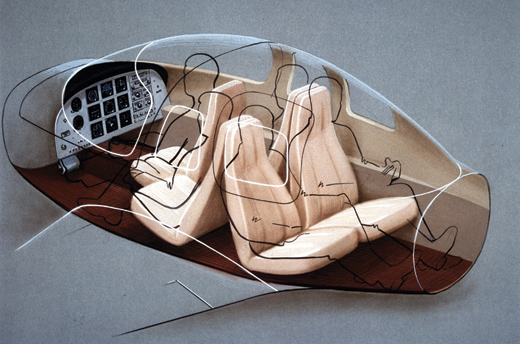 A period illustration of the Catbird’s seating arrangement. The actual airplane isn’t quite as luxurious.

Face to Face with Catbird

After its CAFE victory and a few airshow appearances, Catbird became Rutan’s personal transportation until the Boomerang arrived. Then it was decommissioned and left to hang, upside down, from the roof at Scaled Composites. Zach Reeder, a Scaled engineer, suggested in 2010 that the airplane be brought down and restored to flying status. With Rutan’s approval, the project began in early 2011 and was completed in time to make AirVenture that year, to celebrate Rutan’s retirement.

I saw the Catbird for the first time at Oshkosh in 1988 and again this February during a tour of Scaled Composites and the Mojave Airport. (See “Ends of the Earth: Homebuilding in Mojave.”) I vividly recall thinking, in 1988, what an amazing conveyance the Catbird could be, and fervently hoped that the rumors swirling of a major airframe manufacturer taking it into production would come true. (I was just becoming aware of the homebuilt market at the time and wasn’t terribly put off by Rutan’s insistence that no kits or plans would be created.)

In 1988, the Catbird managed to seem both familiar and futuristic. It’s a conventional planform airplane in many respects: engine in front, big wing in the middle, tail at the back. The bubble canopy, tough enough to withstand pressurization, seemed a bit unusual in the context of the slender fuselage—we’d grown up seeing windows, after all—though it’s interesting to note that all of Rutan’s space designs have simple round windows because that’s the lightest, easiest way to deal with high levels of pressurization and maintain low vehicle weight.

But take a closer look. Those catfish whiskers at the cowling/firewall seam could be fixed lifting surfaces, and to some extent they are. But Reeder, who gave me a personal tour of the airplane, said their real benefit is as flow conditioners, improving the quality of the slipstream as it moves out of the turbulence of the propeller disk and toward the wings. In an airplane so focused on efficiency, nothing could be left to chance; cleaning up this airflow would improve lift and reduce drag. Look, also, at the T-tail: Its surfaces cant forward from the vertical stabilizer to reduce intersection drag at the T. The flapless wing is, as you’d expect, a John Roncz airfoil with a high degree of laminar flow. A contemporary CAFE report says that Roncz expected laminar flow to 65% of chord on the upper surface and 70% on the lower surface.

The Catbird originally used the Lycoming TO-360 carbureted, turbocharged four-cylinder also used in the Rockwell Commander 112TC. This engine is updraft cooled, meaning the inlets are low and the outlets high, with the exhaust going out the top. A real oddball engine, in the grand scheme of things, but one the Scaled guys could get their hands on easily. (This would be a good time to mention that the Scaled modus operandi is expediency above all. If you look closely, really closely, at all of the Scaled projects, they seem almost a tad crude. Very effective, sure, but cosmetics and use of the latest technology are often casualties of getting it done and seeing if it’ll fly.) A new IO-390 would fit like a glove.

Reeder invited me to try the Catbird on for size. In today’s world of electronic instruments, the Catbird’s relentlessly late-1980s collection of round dials seems quaint. A few of the systems are pretty basic, including the manual wastegate and multi-step gear-retraction system. Rutan and his Scalies felt that a pilot should be a pilot, so such things as automatic wastegates and a single lever for the landing gear are just so much icing on the cinnamon roll. Isn’t a cinnamon roll good enough by itself?

The single front seat is perfect, slightly reclined and comfortable. I could see spending all day, control stick in one hand, engine controls in the other. Your front-firing passengers won’t be happy unless your personal hygiene is perfect, and even then only if they’re pretty small themselves. Two sub-teenagers would be ideal. I didn’t try the back seats, but they have a lot more room, and almost unlimited legroom, so aside from a mild case of claustrophobia, your aft-facing passengers could be pretty content.

I couldn’t help but think what a wonderful family airplane the Catbird could be, and if there would be a market for a kit version. I think you’d have to reconsider the one-two-two seating arrangement, and given the costs of landing gear and insurance, you might want to make it fixed gear. But the shape still turns heads, and the new ideas tried there have made it into other aircraft successfully. Could there be a place for a new-think Catbird in the homebuilt market? My totally subjective and slightly emotional vote is a yes.