Belite Aircraft is celebrating the 75th anniversary of the Piper Cub by offering a “Cub” of its own at a special price during EAA AirVenture. The maroon aircraft (Booth 933) across from the ultralight runway sports more than just a few modifications from the stock Belite ultralight.

“We’ve tried to respond to some of our customers most desired requests,” said James Wiebe, CEO and chief designer at Belite. 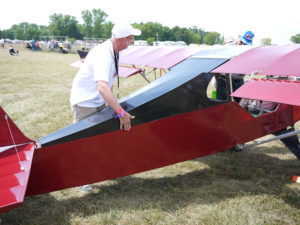 The cabin of the aircraft is now riveted aluminum, pre-cut pieces, as opposed to previous Belite aircraft, which came pre-welded. The aircraft sports a two-cylinder half-VW four-stroke engine, a first for the company, as well as a full-span flaperon and unique mini winglets. It is covered in Dacron, which is then covered in Oracal, an adhesive vinyl with a seven-year outdoor rating.

“The Oracal shortens the finish time on the fabric to three man-days,” said Wiebe.

Wiebe has added three small lockers beneath the seat for storage inside the cockpit as well. Finally, the turtledeck, which gives the aircraft its signature “Cub” silhouette, is completely removable.

Best of all, those who purchase an Ultra Cub during AirVenture, or by August 31, 2012, can receive a $1000 discount off the retail pricing. The kit price is $7995 (base kit cost) plus $500 for the turtledeck.  This price doesn’t include maingear springs or brakes, but it does include solid gear links, and mechanical (drum) brakes are available for $100 extra. It also does not include a fuel tank.