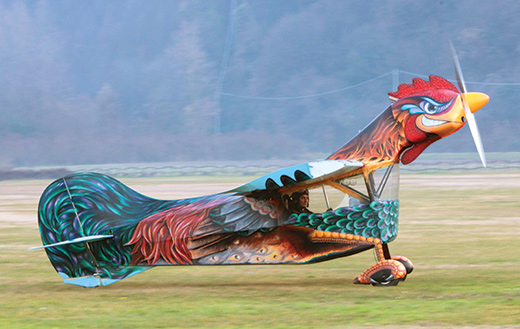 Many pioneering aviators studied bird flight for inspiration, including Leonardo da Vinci, Henri Mignet (Flying Flea) and Otto Lilienthal. But to study the flight of a rooster? At Nervesa della Battaglia, near Treviso in northeastern Italy, aircraft designer and homebuilt aircraft enthusiast Ottone Baggio conceived the idea of building a flying machine modeled on the world’s best known flightless bird: the rooster. And late in 2011, his side-by-side, two-seat Rooster confounded observers when it made its first off-airfield flight. 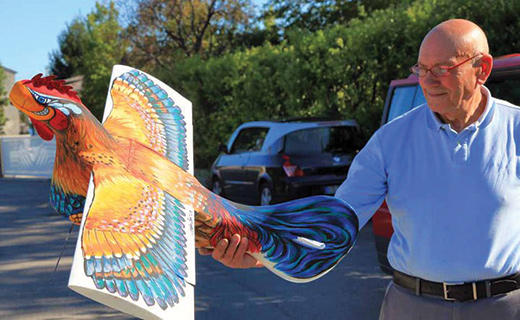 Ottone Baggio poses with the small-scale model that preceded construction of the full-scale Rooster.

It was one of those barroom discussions that ignited the spark that inspired Baggio to embark on this seemingly perverse journey: to make a flying example of a flightless bird. The Rooster took about three years to conceive, design and build. Ottone started with model airplanes, first a “chuck” (hand-launched) glider and then a radio-controlled version. Proving that in small scale such a design would fly, he developed a prototype that would be partially like a conventional, three-axis-controlled small airplane, but would have the world’s most exotic color scheme—plus the head of a rooster. The engine nacelle (the rooster’s head) would be mounted well ahead and above the wing leading edge. The design does not utilize fuselage and wing components from any other kit aircraft, and is 100% original. The wings are of a conventional, lightweight wood structure with a forward box spar that runs through the roof of the cockpit, plus trailing edge spar; there are no wingstruts, and the wings have a 1 dihedral. They are covered in extremely thin-gauge aluminum with a total span of 29 feet, and, unusually, the “bird” has 66%-span flaperons, but these are on the inboard sections of the wings. The wingtips are square and flattish, slightly angled inward with wingtip strobes, and the ailerons are cable operated. 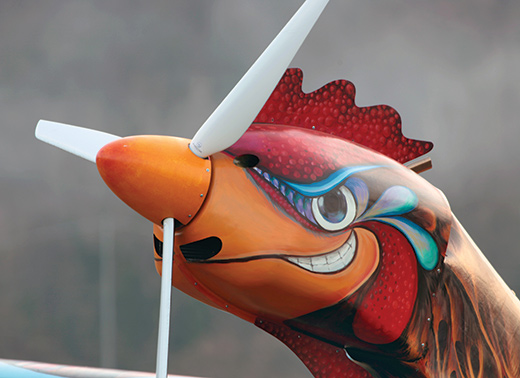 That fierce-looking head conceals the engine compartment. Power is from the ubiquitous 100-hp Rotax 912 engine.

The fuselage is steel tube with gussets covered by fabric, though areas of the forward fuselage are covered in thin-gauge aluminium. The rooster’s head, which is the engine compartment, is a molded composite cowling around a tubular-steel engine bearer. The cockpit resembles that of a 1930s airship gondola with a rounded, acrylic screen and a basic panel. The rudder is linked to the tailwheel, and there are caliper brakes on the mainwheels operated from a hand-actuated brake lever on the panel. Because of the engine’s high thrust line, Baggio has designed a huge tail and rudder relative to the meager 19-foot total length of the rooster, and he even fitted a dorsal “rudder” in which the steerable tailwheel is shrouded. It has an empty weight of 500 pounds and is powered by a 100-horsepower Rotax 912 engine. The paint job took many months of detailed work with an amazing palette of colors. 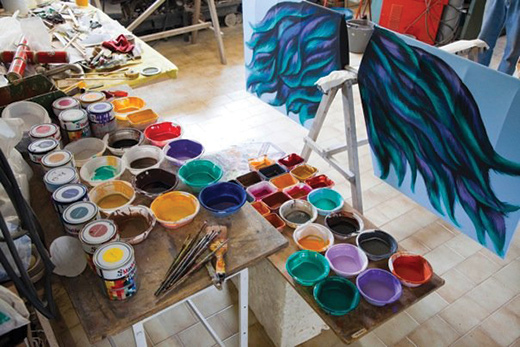 The spectacular palette used for the Rooster’s paint job. As you might imagine, it took many months to complete.

The Rooster, registered in the Italian ultralight sequence as I-9923, was actually completed earlier but suffered some fast-taxi mishaps. In December 2011, the test pilot, fellow homebuilder Daniele Beltrome (who has built a Midget Mustang that he flies from Nervesa) carried out many fast taxi trials and a few tentative hops. “The Rooster is a difficult aircraft to fly,” he reported (no kidding!) and suggested a few adjustments to its elevators and control-wire cable tensions. The first proper flight, lasting about 10 minutes, had the Rooster leaving the airfield, completing a slow 180 turn and then returning to the airfield. 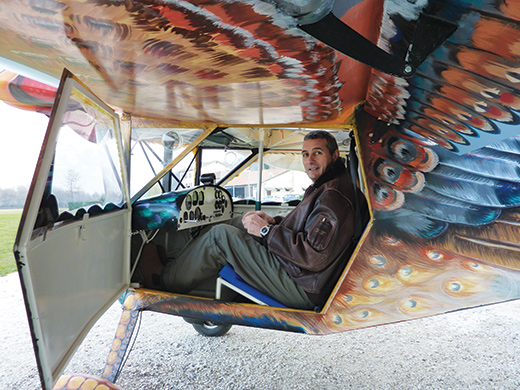 Daniele Beltrome carried out much of the initial flight testing. An intrepid soul.

A Handful of Chicken

Unfortunately, Beltrome further reported, “The Rooster is unstable in roll and has a tendency to go into the first stages of a spin when you start to turn, if it isn’t noticed and checked.” He put in one stage of the flaperons to try to solve this problem. This is why the first flight turn was a very gentle affair with little more than 5 of bank and often less, with a very obvious and “twitchy” pitch.

Perhaps the most amazing and interesting part of the Rooster is its control system, which works in reverse to a normal three-axis-control aircraft. The control column comes down from the roof of the cockpit, and the control inputs are exactly the opposite to what one learns in normal piloting skills, so you pull back on the stick to go down and vice versa. This is the reason for some of the accidents during early taxi tests. It is apparently more like flying a delta-wing hang glider. 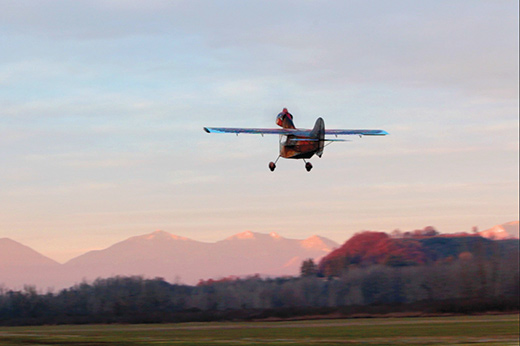 Egg production in the local hen houses may have been disrupted by the sight of this giant bird overhead.

More test flying was planned and the builder may extend the flaperons to full span to help improve roll control. But like the bird of its inspiration, the Rooster is unlikely to fly that much and achieve widespread acceptance among homebuilders and pilots. It is more the product of a dream becoming reality. However, as an aviation spectacle, the sight of the Rooster flying over the Nervesa Valley has gotten everyone talking aviation and flight, though it may also have stirred considerable unrest and disruption to egg production in local hen houses. Perhaps Baggio has proved to himself why the rooster is a flightless bird. 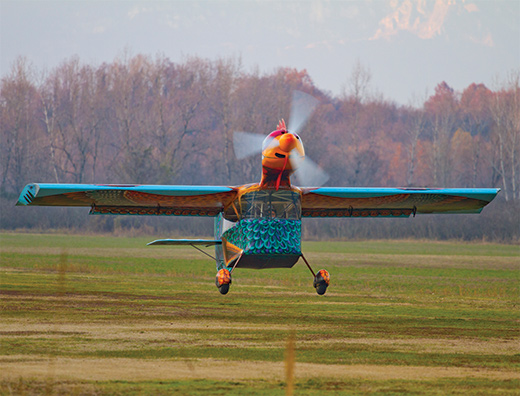 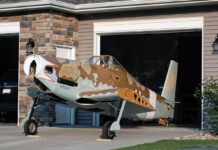 Mel Asberry - November 21, 2011
0
Mel Asberry looks at who can and cannot sign off on homebuilt aircraft inspections.