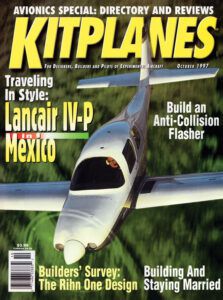 A sleek Lancair IV-P was on our October 1997 cover along with the blurb promising an over-gulf trip from Florida to Mexico. Writer Keith Beveridge joined Lancair factory demo pilot Don Goetz and PR staffer Kasey Jordan for a long-distance taste of the IV-P. Keith was, as you would imagine, impressed with the Lancair’s speed (they covered 494 nautical miles in 2.3 hours) and comfort at the cross-gulf altitude of 22,000 feet.

Inside this issue was a feature story by Don Downie chronicling the development of the Lionheart, far from a modernized, composite Beech Staggerwing, though the comparisons were often made. Designer Larry French, an engineer at the Marshall Space Center in Huntsville, Alabama, had a need for a family-
sized airplane but not the budget for a Piper Malibu, which he considered the ideal solution. As many designs start with a powerplant, French began looking for the best deal on a 300-plus-hp engine and landed on the Pratt & Whitney R-985 radial, which was available in some number both used and rebuilt. Downie’s story was written before the Lionheart’s first flight, which did happen that year. Ultimately six kits were delivered and three Lionhearts are believed to have flown.

Dan Johnson featured the Mainair Sports Blade, a “British trike on the cutting edge.” Using the newly popular Rotax 912 four-stroke, the Sports Blade trike offered a cruise speed of “40–70 mph” with a 30-mph stall, but speed has never been the point of trikes. With the 912, the Sports Blade was priced at $29,000 complete, which, as Johnson noted, also reflected that the aircraft was certified in the U.K. “No matter what, you’ll still get a design that has gone through a full certification regimen. I found it satisfying and I think most Yankee aviators probably prefer a certified aircraft to one that isn’t,” Johnson said, “if price and other matters are equal.”

Two new products bore noting in this issue. Panel Planner had just come out with a program to help organize instruments and keep track of costs, and included a database of instruments whose dimensions were known. Back in the day when we made a bunch of circular holes… Also NSI had just introduced a cockpit-adjustable prop with Warp Drive blades for the Rotax 912 and 914 engines. The electrically driven system allowed for a wide range of pitch settings as well as flat or even reverse-pitch modes. Here, let me back into my parking space…

On the next to last page (cover three in magazine parlance) was the Stoddard-Hamilton Glasair Super II RG, no doubt the high watermark of the design, with a longer fuselage, wider horizontal tail, available slotted flaps and refined handling. Where the Glasair III always kept pilots on their toes, the Super II was a sweetheart.

Finally, our 11-page “Avionics Update ’97” reflected the rapidly growing GPS market, in both panel-mount and portable forms. The basic displays and databases of these early units seem primitive today—and the handful of them approved for IFR were limited to en route and non-precision approaches only since GPS-based vertical guidance was some ways off. But these units paved the way for our current satellite-nav technologies that few of us take for granted.