Last month, I said I was going to do some stuff that could be done, no sweat. I think perhaps this is the ultimate “no sweat” design.

It has been a remarkable weather year in Northern California. Using the historic July-through-June weather year, we generally get about 50 inches of rain. My rain gauge goes up to 99.99 inches, but all I need is another two inches of rain to see what happens when the gauge overflows. That’s right, we’ve had almost 100 inches of rain, and I’m told we have a bit more to come. Not only is my gauge going to overflow, but most of the streams and rivers around here are doing the same thing. That’s great news for the folks around here (including yours truly) that pan in the river for gold in the summers, but I digress… 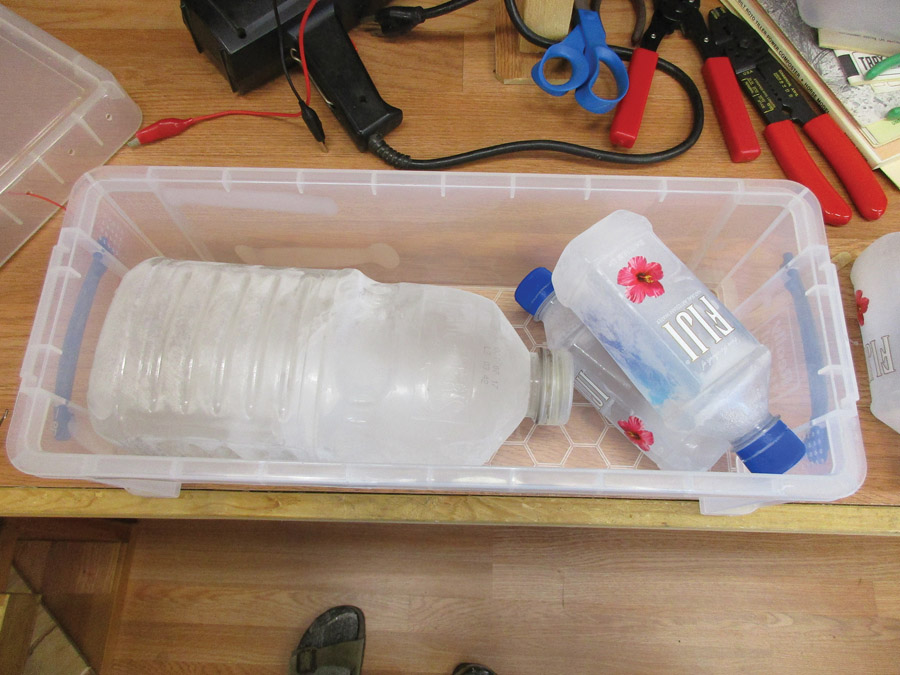 A frozen 1.5-liter water bottle and two 330-milliliter (ml.) water bottles in the thermal chamber for the first test.

By the time you read this column, we will be on the downslope of another brutal summer, and it is going to linger on for some of us that have hot and late summers. As we’ve all been taught, climbing our airplane gets us into cooler air at a rate of about 3.5 F (2 C) for every thousand feet of climb. The problem is twofold. One, you aren’t climbing very much on that long taxi from the hangar or tiedown to the runup area. Two, that climb takes some time and can be fairly sweaty on a real scorcher of a day. 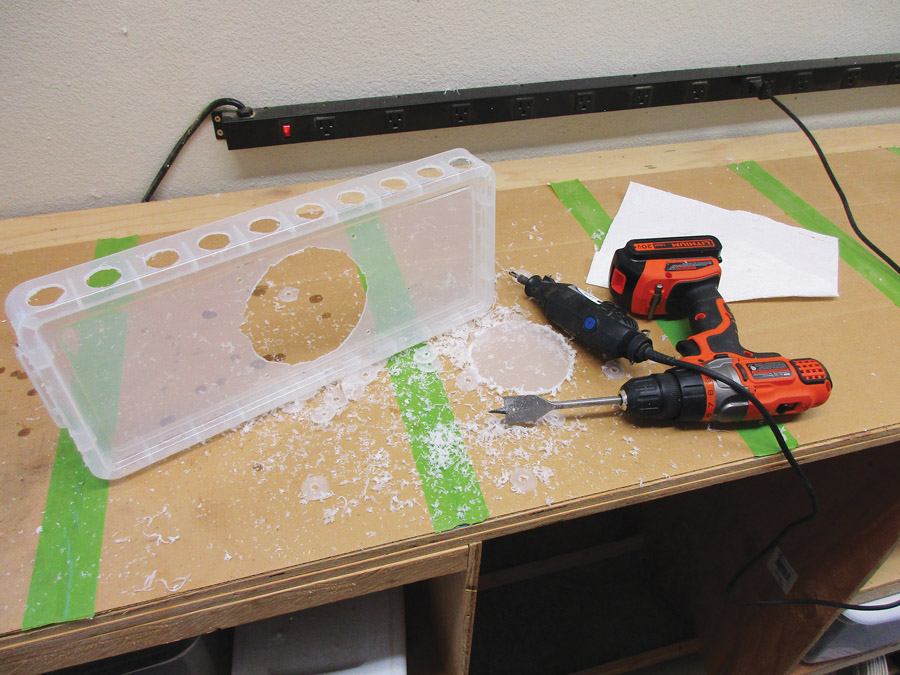 For most of us, putting an air conditioning pump onto the rear accessory plate of our engines tied into a reservoir of Freon and a little radiator cooler isn’t an option. The weight is excessive, the plumbing atrocious, and the benefit marginal for just a few minutes of cool air. What I’d like to show you is a way of generating coolth with a minimum of hardware and a maximum of cool air. 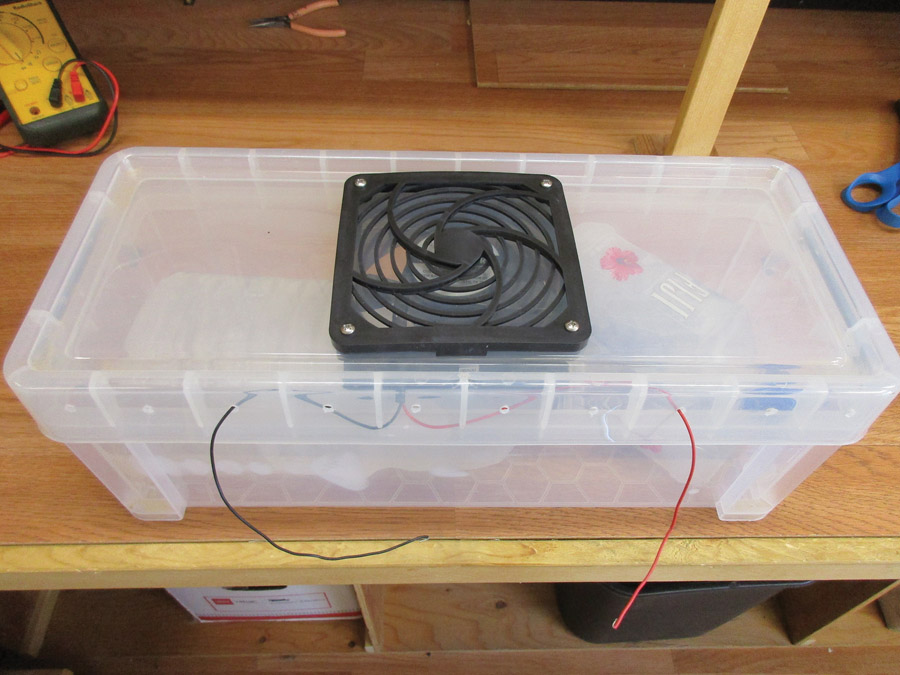 The fan mounted on the top of the thermal chamber. You can see the ice containers inside.

One of the characteristics of water is that it is has a large capacity for thermal mass and a rather spectacular rate of latent heat…which is the largest player in this design. It takes a lot more energy to convert ice and water to water than any other process in this scheme. Short observation—ice-cold water chills down atmospheric air very quickly.

Water will go through three distinct phases as it transitions from ice to liquid. We have the totally solid ice state, the ice/water mixed state, and the liquid water state. Each of these states require an amount of energy to accomplish the transition from ice to water, and each one of them requires a separate calculation as to how much energy is required. Unless you want me to start throwing around the old “kilojoules per kilogram/degree Kelvin” factors, just believe me that the only way that water can get the energy to melt is by sucking energy from the surrounding air…and cooling it down in the process. 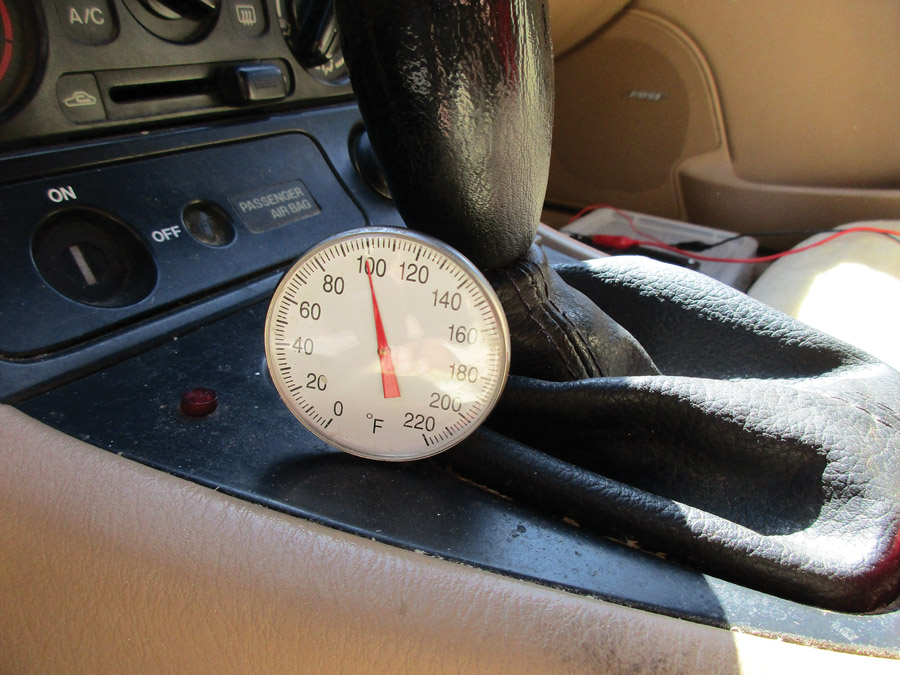 The temperature in the Miata after half an hour in the sun. 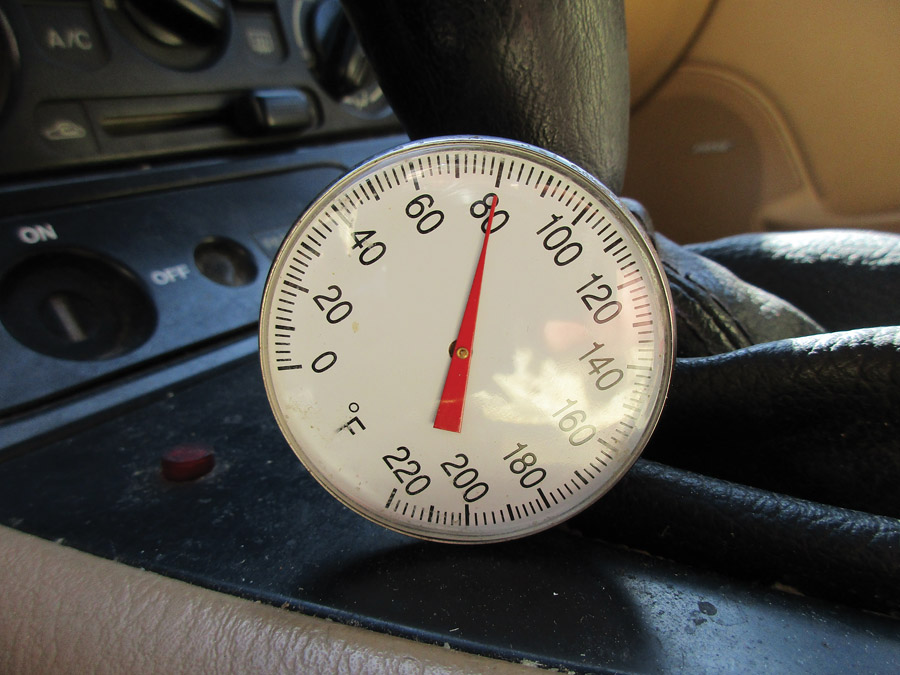 he temperature after half an hour of cooling with the thermal chamber.

Here are the factors that I used in coming up with the calculation for how much coolth we can expect from our little lashup: The main heat sucker is a 2-liter apple juice bottle filled with frozen water. The two little rectangular frozen drink/water bottles are there for when I land and need a quick shot of water when I tie down. My refrigerator has a freezer temperature of 15F (-10C), and I’ll stop trying to cool things when the ice water gets to about 50F (10C). There just isn’t much cooling going after we get to this point, with this small of a temperature differential between cabin air and water. The average two-place homebuilt has a cabin volume of about 200 cubic feet (4x5x10 feet). Presuming that there are two bodies in the airplane at 98.6F (37C) generating heat all the time that they are there, then we can come up with a calculation that says that when all the ice is melted into 50F (10C) water, the cabin should be cooled down something on the order of 40F (22C). (See here for a sample calculation.)

Now that isn’t going to happen for a lot of reasons. That single 2-liter bottle of frozen H2O isn’t going to take your summer 100F cabin down to 60. It might take it down to 75, but even that depends on how shiny (reflective) your fuselage is, how leaky your cabin air seals are, whether your people are 100-pound skinny-minnies or 250-pound sumo wrestlers, and a whole lot of other stuff. It is one of those unsolvable equations that says, “Hook it up and see what happens.” 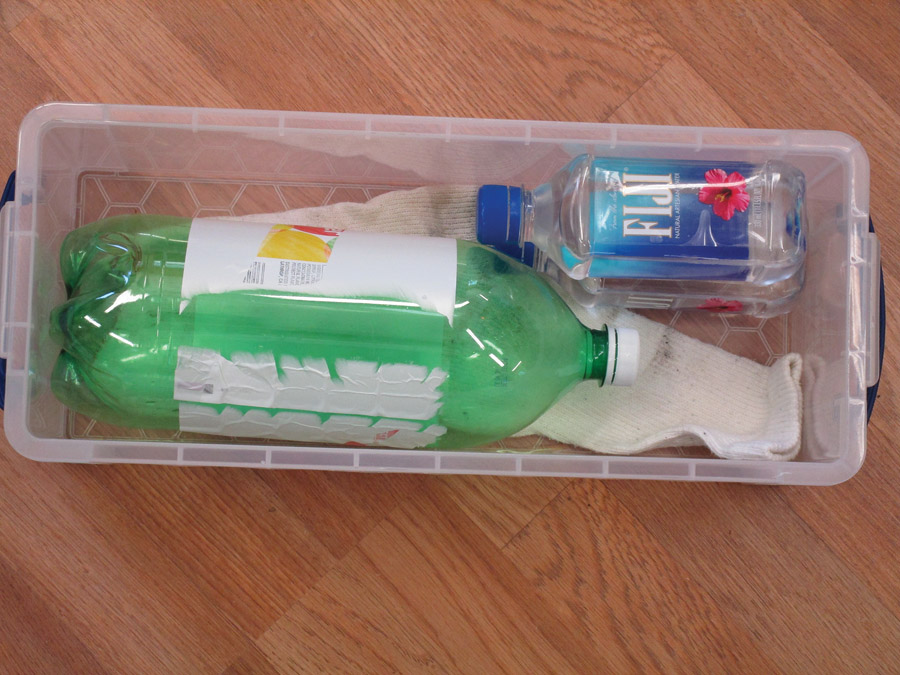 Not a good idea. The frozen soda bottle restricted the fan too much and wasted room.

Let’s get to it. The entire apparatus consists of a plastic storage box and a computer 12-volt fan. The top of the box (the part that comes off) is routed out for the fan, and the sides are drilled for cabin air to enter the storage box (thermal chamber).

How big do we make the side-drilled holes? Equal to the area of the circle formed by the fan’s outer edge. In this case, about 20 square inches. Since we have 24 holes, this is a bit less than a square inch per hole, and if you go through the old “pi r-squared” formula, you find that just a bit over a 1-inch di-ameter drill hole should be enough. By the way, that formula is wrong. Pi are round, cornbread are square. 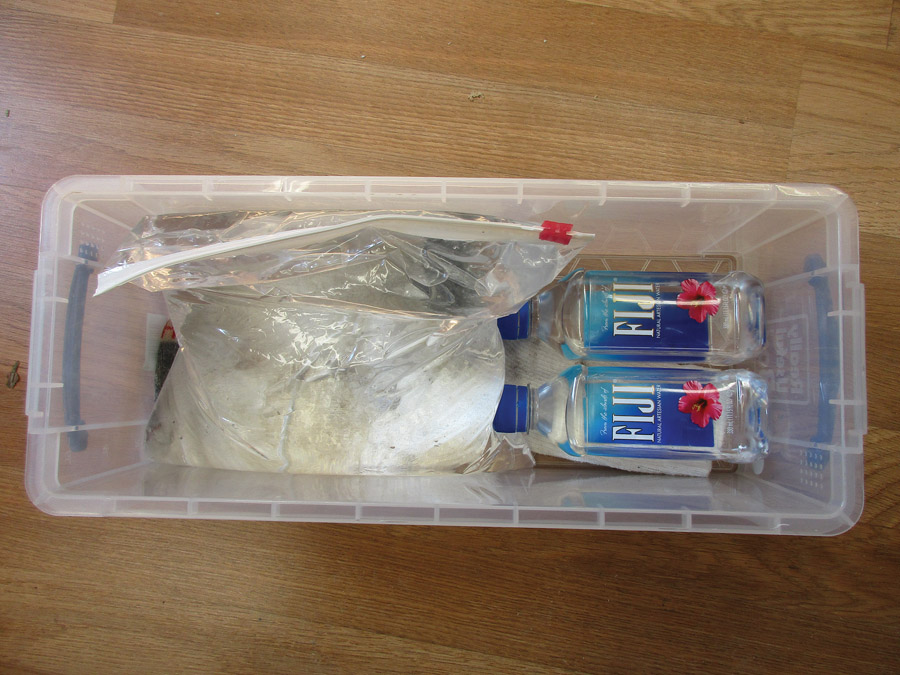 My choice for the optimum cooling combination: a gallon Ziploc bag full of frozen water and the two water bottles in the end. I could have increased the mass of the ice still further with a couple of quart Ziploc bags on the top of the water bottles.

Test results? I didn’t have a small Experimental aircraft to work with, and the temperature has been remarkably cool after a really high temperature start to spring. Just my luck. However, we had a pretty warm one yesterday, and when I measured the Mazda Miata, it came up very close to 200 cubic feet of interior volume. Move that little red rascal out into the full sunshine on the driveway and bingo, the inside heats up to 100F in half an hour. Fire up our little coolth machine and bingo, fifteen minutes later the ice is half gone and the interior temperature has dropped to 80F. In a half-hour the ice is all water and the inside temp has dropped to 75F. Success!

I did some further tests to see if I could improve on the design. What I found is that if you use small individual bottles of ice, the temperature drops faster, but the ice melts faster. If you use large bottles the reverse is true. Rectangular bottles (like large fruit juice bottles) fit better and you can get more ice into the rectangular “thermal chamber” plastic storage box. For the ultimate in ice longevity, use Ziploc plastic bags full of water and freeze them to shape inside of the thermal chamber.

Stuff Worth Thinking About

• Try to keep one or two of those small rectangular frozen water bottles in the chamber. You always want a cool drink of water at the first rest stop.

• Do not pour water directly into the thermal chamber and freeze it in place. Yes, this maximizes the amount of ice you can carry, but also maximizes the spilled water out the vent holes when you hit the turbulence.

• I considered using dry ice (-109.3F or -78.5C) but couldn’t accurately predict what would happen to the breathing air inside of a closed vessel (like the airplane) when dry ice converts to gaseous CO2. Perhaps one of our more literate chemists can chime in on this.

• I wanted to use a minimal amount of electrical current to run this cooler. This particular one runs on 0.3 amperes of 12-volt power. That’s 300 milliamperes.

• Here are the tradeoffs.

• Don’t be tempted to use the omnipresent 2-liter soda bottles unless you’ve got a large thermal chamber. That round bottle takes up a lot of wasted room between the bottles.

Finally, did you hear that Oxygen was dating Magnesium? OMg. See you next month. Until then…stay tuned…

Build a Bear: Keeping It Real

Dave Prizio - January 17, 2010
0
Dave Prizio and his Build-a-Bear crew get the Texas Sport Cub ready for flight testing, and take to the skies.