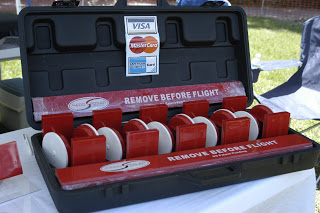 Tim Tuinder knows about hurricanes. He and his wife, Sharon, run a missionary air service, Harvest Air, out of Puerto Rico, supporting orphanages in the Caribbean, and he’s seen his share of wind-damaged airplanes.

To keep the wind from disappointing the people who depend on the Tuinders and their airplane, they designed a system of wind spoilers called the Aerospoiler system, which provides protection for aircraft that cannot be hangared. The system consists of several commercial-grade suction cups that are operated by a lever on the assembly housing. Each spoiler blade slips neatly into receivers on the suction cups and 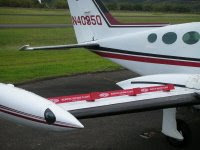 destroys 96% of the lift generated by the wing. The Aerospoiler system comes in its own compact, high-grade lightweight plastic casing and can easily be carried in most baggage compartments. It retails for $379, which doesn’t seem like much after your first windstorm passes and your airplane is intact.