You’re forgiven if you thought Homebuilt Camping at AirVenture was an RV fly-in. The Van Grunsven aluminum squad so out numbers all other designs that anything different–other than a Thorp T-18–really stands out.

So it was when late in the AirVenture week we couldn’t help but notice this unusual shape while hiking back to our tent. Turns out it’s an Allied TJ, another post-war boom commercial failure, but one living on with John Rau of Liberty, Kansas. He’s slowly continuing to develop this example patterned off of one built by T. J. Balindine, who passed away some months ago.

If you see Culver lineage in the TJ’s lines you’re not far off; the principles involved were from Culver, including chief test pilot Harry Ragland.

John’s example we’re looking at here is one of just a handful of TJ’s ever built, which he characterizes as a non-kit, no-plans airplane at this point. It’s a 4-seater originally designed for a C-145 engine, but carrying an IO-360 Continental now.  It weighs about 1620 lb empty, cruises at 150 mph at 9.5 gph at 7500 ft and lands at 58 mph.

John has 133 hours on the airframe, which he says flies normally and, “doesn’t do anything stupid.” He compares it to a Mooney M20C, although it out-climbs the Mooney. There was a spar issue with the first TJ’s, but this one has been beefed up to the tune of 150 lb additional weight, so strength shouldn’t be a worry any more.

Currently John is, “just working through the issues.” Engine cooling during the 120 mph climb is one of those, as one look at the unusual cowling and inboard air inlet might suggest. So far John has added a few exit lips, which have helped. There are no cowl flaps.

As John zeros in on the functional parameters he’s anticipating getting the plane painted and keeping it for personal transport. There’s no thought of kitting the design, and most of the original TJ effort has ended up in a Wichita, Kansas museum in case you’re interested in seeing more. 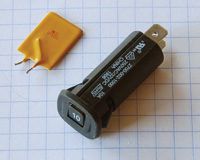 Bob Fritz - February 16, 2009
0
This month builder Bob Fritz searches for a better alternative to last-century circuit technology for his panel and finds it in a Polyfuse.