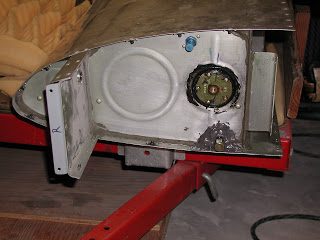 Was he just contemplating his work, I wondered, as I walked toward my husband, who was sitting catatonic in a green plastic chair in the hangar. He was staring at the nearly, but not quite complete, RV-10 in front of him, and the look on his face was anything but awe. Exhaustion? Maybe. Not quite despair. Bewilderment?

Yes, after nearly four years, that was it. “We should have bought one, complete,” he sighed and looked me straight in the eye. “We’d have been flying since last year.” And ours is a quickbuild kit.

Well, it’s hard to argue about the flying point. There are more than 100 RV-10s flying, and it is common knowledge, even to the FAA types, that some of them were farmed out to builder-assist programs that did most of the construction for the builders. A few were built by individuals purely for resale. That’s not hearsay, that’s fact. And the problem is that it is tempting for any builders who got into the process because they really want to fly.

“It probably would have cost us what?” I counter, trying to give my husband, the tired builder, something to hang on thousands of construction hours in this hangar.

“Hey, that’s a year of college, maybe two!” I reply. With two children due to depart the nest this autumn, that seems significant. It sure beats the usual pep talk about building for the adventure of it, or to be able to say it is all yours. He’s an A&P.; Even if he had not built it, he could work on it.

He waves his arm in a big arc at the hangar, the airplane, now with all its parts attached and nearly everything hooked up. “This was four years of my spare time…” he trails off.

“And it’s almost done,” I tell him. “You should be extremely proud of that. Come on, let’s go get a beer,” I smile, and caress his shoulder.

“In a minute,” he replies, pushing himself out of the chair and climbing back up onto the wing and into the still raw cockpit. “I’ve just got a couple little details to clean up here.”

That’s how I know he’ll finish. Putting a date on it might be premature, but that conglomeration of fiberglass, aluminum, wire and steel will fly like the finely tuned machine it was meant to be, and sometime soon.