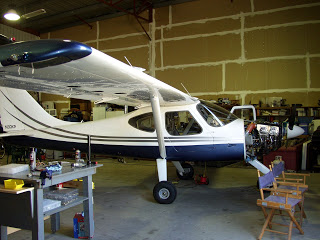 I snuck out to the hangar in late February to make a simple modification to my Glastar Sportsman and inadvertently began the annual condition inspection. (OK. I know the proper term is “condition inspection” for Experimentals, and that it is required every 12 months; but I’m going to just call it the annual.)

The modification was straightforward. Sportsman aircraft of this vintage (circa 2006) have a simple fuel system; two inboard tanks of 15 gallons each and two outboard tanks right at the end of the wing holding 10 gallons each. Vents for both tanks terminate in tubes hanging below the wingtip at about mid chord. Works great. 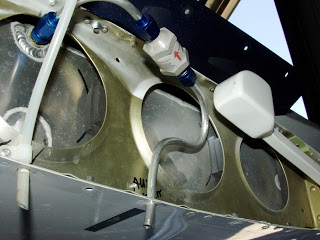 Except for the tip tanks, which have a nasty tendency to urinate fuel when they’re full and you’ve made any kind of turn. The turning force sends the fuel outboard, and it’s just a short jump from the vent to the tarmac; the inboards will do the same thing, but it takes a Formula 1-like turn to do it.

There are many solutions out there, including rerouting the vents from end to end: That is, have the right tank’s vent line exit the right wing tip, and vice versa. Too big a job for an already flying airplane.

So I did what Cessna has done: Install check valves in the vent line. But not just any check valves, sorry to say. (Yet another day without having to go to the McMaster-Carr website…sigh.) These valves must admit air to the tank when it’s being emptied, not allow raw fuel to go back the other way (overboard), but must also have bleed orifices so that if you fill the tank, park in the sun, the fuel has somewhere to go when it heats up. Ballooning an aluminum tank is not desirable. I had also considered a DIY version of this valve, with a one-way valve tee’d into a secondary loop with some kind of restrictor. But with a ready-made solution in hand, I decided to go store-bought instead. 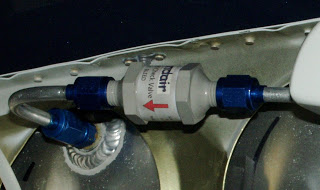 Andair makes valves specifically for this purpose, so out of the annual budget came $45 each, payable in full to Aircraft Spruce. The valves arrived a day or two later, and they’re beautiful, as is everything I’ve seen from Andair. They come in a variety of configurations, but I chose the ones with -4 nipples on each end. A few minutes with the 1/4-inch tubing, cutter and bender…and Bob’s your uncle. I tried to place the valve as level as possible, with as much of a run back to the tank as there was room in the wingtip.

Testing them out: On the next flight, I filled the tip tanks and made a number of sharp turns heading back out to the runway. While the vents will still dribble a bit of fuel like this, it’s nothing like the torrent of precious fuel that used to come out. I consider this a success, and to finish the testing I ran the airplane with just one of the valves installed and timed the transfer of fuel from outboards to inboards. They took within a minute of each other, which has proven to be typical of the airplane over the last 300-plus hours.

How does this relate to the annual? Well, while I was in there, I took a few minutes to poke around the tip, look for loose items, inspect the aileron counterweight, and commit a few more annual-checklist items. With the tips back on—in fact, installation of these check valves took place over two weekends—I was one step closer to having the annual done.

Barnaby Wainfan - August 10, 2022
3
Not every airplane is designed to perform intentional spins, but that doesn’t mean the...