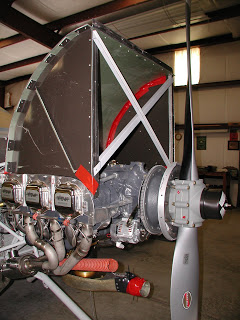 I knew it would run eventually; I just didn’t know when. I thought that the leaking right fuel tank would slow our RV-10 build down, but so far it is turning out to be just a blip.

With little fanfare the other evening, just before sunset, my husband pulled the project forward, shuffling our airplane stack so that it was the first machine out of the hangar the next morning. I looked out my office window and saw it sitting in the driveway, gleaming in the mottled sunshine, surrounded by a phalanx of small fire extinguishers.

That’s how I knew it was time. I rushed out with my camera, not even the good one, just in time to hear the Sky-Tec lightweight starter easily kick over the Lycoming IO-540 for the first light of its rebuilt life. After two years pickled and hanging on its motor mounts, the engine shuddered to life.

White, then dark smoke puffed from the dual exhausts, which seemed, at low power, like they were going to shake right off. But they didn’t, and as the engine rpm increased the smoke disappeared, and the airplane seemed to settle into something smoother. One minute. Then shutdown.

The engine was still cool enough to lay your palms on the cylinder fins. Still, a fan was immediately mounted on top of the engine to pull away residual heat. Sealant oozed from the slip joints of the exhaust pipes, and steamed off. A few drops of oil blew out, but then there’d been a lot of oiling going on that morning during the pre-start lube. No obvious leaks. Not even fuel (being provided by the still attached, non-leaking left tank).

A second start and run for 1.5 minutes was nominal. And later, a third 2 minute run at a leaner mixture provided a much smoother experience. The only snags? The throw rod on the primer is a bit long and interferes with the control stick in the cockpit. But that’s no problem. We’ve ordered a shorter rod.

For longer ground runs we’ve installed an aluminum cooling shroud attached to the top of the engine to duct in air. The hope is to keep those temperatures nominal throughout the initial, and highly critical break-in period. Here’s hoping that works.

The end of the day found my husband and a buddy imbibing in a celebratory Lite beer while recapping the excitement. No remorse. Just smiles and deep satisfaction. That’s why we build.