On November 14, 1969, humankind’s second journey to land on the moon lifted off from the Kennedy Space Center on a lousy weather day. It was lousy because there were thunderstorms around (as there often are on the Florida coast), and it turns out that no one had really thought about the consequences of sending a large lightning rod flying quickly into the air, its tail grounded electrically to the earth through its exhaust plume. Sure enough, a few seconds after clearing the launch tower and entering the clouds, a bright flash enveloped the rocket and spacecraft, and all heck broke loose on board.

A significant event (a classic in the corporate memory of everyone who has served, does serve, or will serve in NASA’s Mission Control), this moment in flight history has spawned three stories—all of which are true. The first is a joke, which might be understood only by those who are familiar with the culture of the great state of Texas. “Hey, didja’ hear the one about the Aggie Flight Director who launched a Saturn V into a thunderstorm?”

The second story is of the young flight controller who knew his systems better than anyone else in the world and saved the day by suggesting a single, obscure switch throw that restored data to the ground and helped them get the spacecraft restarted and safely into orbit.

The third story is much more important to aviators today. After the Saturn V had finished lofting the spacecraft into orbit and everyone’s nerves had settled down, it came to the Flight Director to determine if things were in good enough shape to leave earth orbit and head for the moon. There were millions of components in the ship and tens of thousands of circuits and electrical devices, any one of which could have been fried, and was now a ticking time bomb, waiting to go off when it was least convenient. It was in this narrow, two-hour window, as Flight Director Gerry Griffin contemplated the fate of the mission, that the overall boss of mission operations, Dr. Christopher C. Kraft, walked up behind Griffin, put his hand on his shoulder, and said, “Young man, you do not have to go to the moon today.”

It was a simple statement of support for whatever decision Griffin might make. It took the pressure off, perceived or real, that everything must be done—and risked—to go to the moon. Even though Griffin knew that aborting would dump the entire lunar spacecraft into the ocean, he had his boss’s support to make the right call. And that’s something that every pilot—especially those pushing on, into IFR (or worse) weather—needs to give themselves. 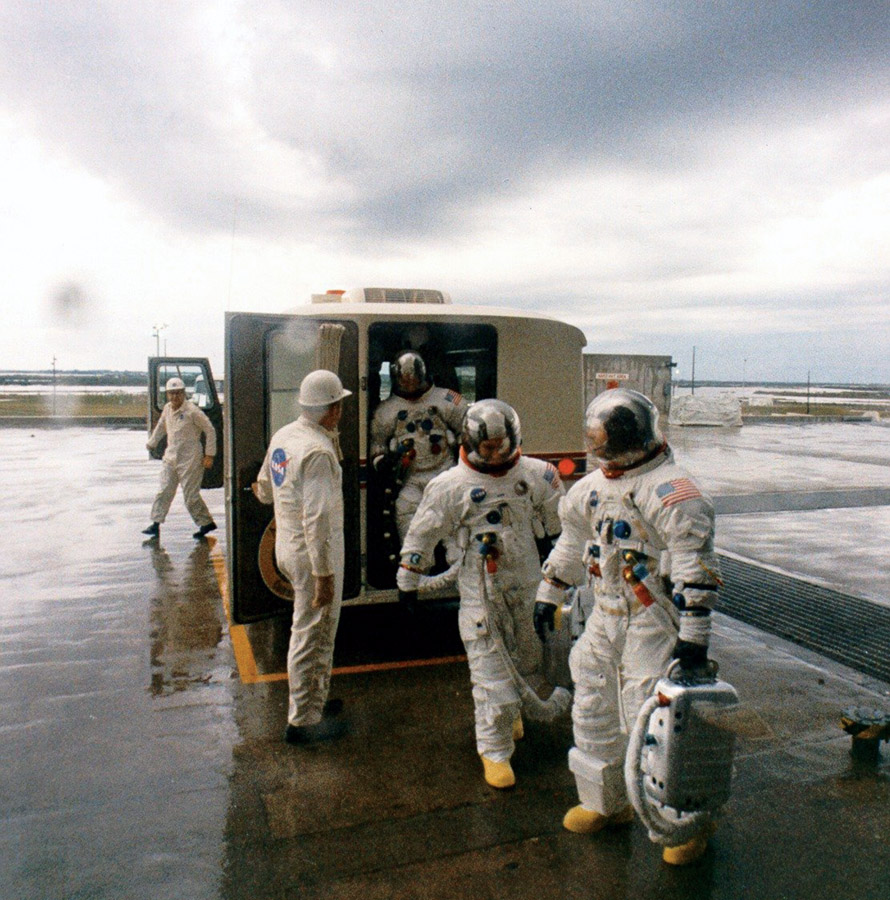 These guys didn’t have to leave for the moon on the date originally scheduled. If things don’t look good, you can make your next flight on a different day, too. (Photo: NASA)

I read often of pilots who limit their IFR flying to good days with high ceilings and visibility, using the instrument ticket to fly through a few low clouds on departure, or tickling the clouds enroute to a nice vectored descent into a VFR approach. That’s a good way to fly. But I oftentimes read that “the weather got worse unexpectedly, and I was forced to shoot an approach to minimums.” I read this and think, “Forced? By whom?” Sure, if you’re low on fuel and the weather goes south, and you’ve got no way to get to an alternate, you might well be forced to shoot that low approach. But who put you in that situation in the first place? If it was anyone but you, then you have the wrong boss!

Too often, we forget that when we’re flying light airplanes (anything that isn’t going to measure up to airline Part 121 standards), we are the deciding factor for all of the goes and no-goes. We decide when to launch and when to stay on the ground. We decide to press on when the weather is deteriorating or to turn early for an alternate. And we are the ones who use up all the fuel above the legal minimum to stretch to a destination when we really should be heading somewhere else.

I used to fly a lot more IFR than I do now, mostly because I moved to the high desert, where we rarely have any sort of weather (and when we do, it has ice in it, and I’d rather have ice in my drink, thank you). But when I did, I made sure to watch all of the weather within the range of my fuel tanks—ahead, to the sides, and behind, and made sure that I always had a VFR place to land within my fuel requirements. That’s what I call “light IFR,” which many people don’t believe exists. The trick is, it exists if you make it exist, by using good judgment.

The important part of the Apollo 12 story is really making sure that you can honestly tell yourself, “You don’t have to go to (wherever) today.” You control that—not your spouse, your kids, your boss, or a bunch of aviators that you think might call you chicken if you turned around. You decide when the weather at your destination isn’t coming up the way it was forecasted—or is going down faster than predicted. You decide where to go to find a low-stress alternate to set down and wait it out. And you make the go/no-go decision when that little knot starts forming in the pit of your stomach.

Personally, if I have to be someplace (with no excuses for being absent), I have a ticket on a major air carrier in my pocket. I might use it, I might fly myself—either way, I will make the decision to go the way that creates the least stress.

Griffin? He sent Conrad, Bean, and Gordon to the moon that day. A gutsy call, but one based on thorough analysis and consultation with the thousands of men and women who designed and built the spacecraft—and all of whom knew that the pressure was off, because they didn’t have to go to the moon that day.

Paul Dye - March 20, 2012
0
Acknowledging risk and taking steps to minimize it are safer than denying that it exists.