Bob Archer started work in the Southern California aerospace community, beginning his career in antenna technology, in 1955 following service in the U.S. Air Force. In the early sixties Bob and a fellow worker at TRW started a small company making internal zero drag aircraft antennas for general aviation. The partner soon dropped out and Archer continued a successful, sideline business. His antennae have been particularly attractive to T-18 and composite (especially Lancair) builders. Archer’s wife and son, Lee Archer, intend to continue producing the Archer antennae and selling them through Aircraft Spruce, Chief, and Wag-Aero.

Souls On Board: Two 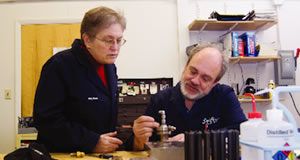