Last month we looked at the Flying Flea (Pou-du-Ciel) and what caused the original HM.14 Pou to have a series of fatal accidents in which the airplane was seen to pitch over into a steep, sometimes inverted, dive into the ground while approaching to land.

These accidents were of greater than normal concern because they were unlike anything seen before.

My research has found at least seven such accidents and one contemporary report put the number at 11 before officialdom intervened and grounded the HM.14.

A few mishaps that could have been attributed to “normal” causes or poor workmanship in an Amateur-Built airplane would not have aroused undue concern, but the fact that there was something different and very specific to the type causing a series of fatal crashes was cause for great alarm.

Much was written about the cause of the “diving tendency” of the original HM.14, both at the time of the original Flying Flea accidents and in the ensuing years. Unfortunately, most of it is wrong.

There was a lot of speculation and theorizing at the time. Many later accounts simply repeated these unsubstantiated theories. Several contemporary theories of the cause of the problem were directly contradictory to each other. It’s also clear that many of the writers lacked technical understanding and had never read the wind tunnel reports from the full-scale tests in Britain and France. 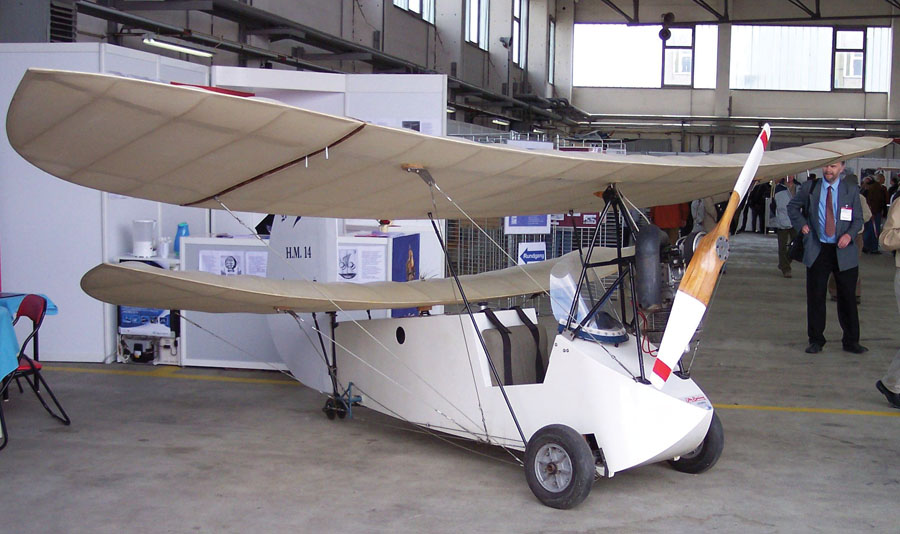 One concept that got a lot of attention was the idea of a supposedly magical “slot effect” between the two wings. The airflow through the relatively narrow slot between the trailing edge of the front wing and the upper surface of the rear wing was purported to have powerful (and largely beneficial) aerodynamic effects. Mignet is partially responsible for this belief since he made it clear in his original book that he intended for the tandem wings of the Pou to act like a wing protected by a Handley Page slot in order to provide stall resistance.

In light of current knowledge, it seems likely that the observed stall resistance of the Pou was due to natural angle of attack limiting, much like that exhibited by the Rutan canard designs, rather than due to the slot-like interaction between the wings. The front wing, which provides pitch control, stalls first. As it stalls it loses its ability to command any further increase in angle of attack, and the aircraft settles into a semi-stalled glide or pitch-nod at the angle of attack where the forward wing starts to stall.

At the time of the original Flying Flea accidents, the slot effect was believed by many to be the source of the Flea’s stall resistance and also to play a role in causing the uncontrollable dive.

One idea put forth to explain the tuck-under was that when the stick was pulled back too far, the slot effect produced a venture effect between the trailing edge of the front wing and the upper surface of the rear wing that increased the lift of the rear wing so much it forced the nose down.

A different writer stated that “the vital slot-effect disappears at small angles of incidence” and “The front wing, which acts like an elevator, becomes ineffective in the absence of slot effect.”

It’s obvious that both explanations cannot be right since they contradict each other. You can’t have a “super slot effect” forcing the nose down at the same time as “the vital slot-effect” is disappearing.

Clearly the people offering these explanations had not seen or understood the results of the wind tunnel tests. 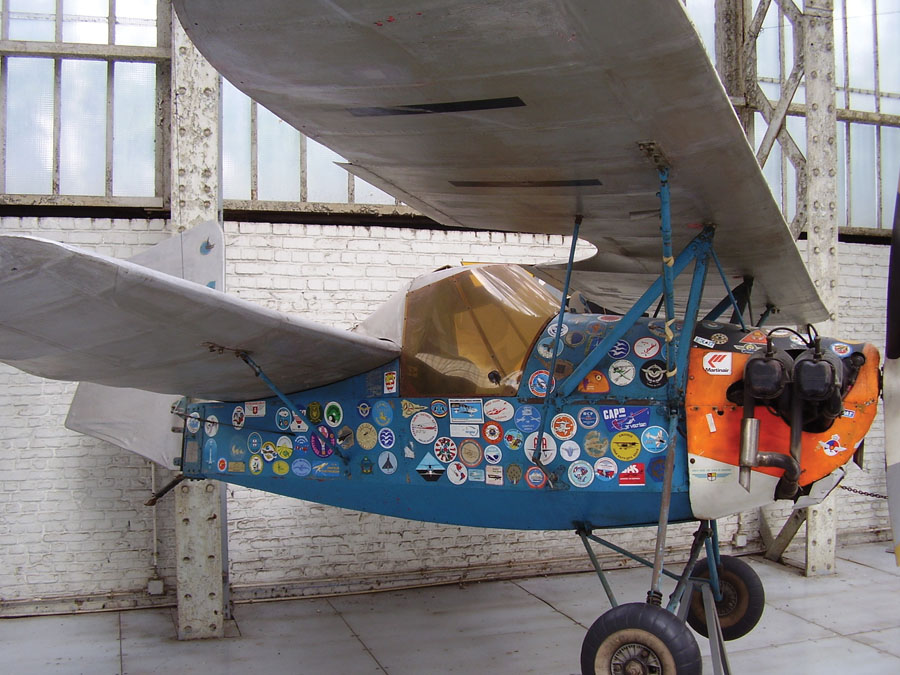 What the Wind Tunnel Results Say

While I have not seen a complete copy of the French report, I have been able to locate a scan of the report from the test done in the RAE 24-foot wind tunnel In Farnborough, England (Scroll to lower half of page for English translation).

We discussed the pitch instability of the Flea, discovered in the wind tunnel last month, but did not discuss the control power findings relevant to the slot- effect theories.

The plotted test data clearly show that the front wing remains an effective elevator over its entire range of travel. Pulling the stick back does not cause a nose-down change in pitching moment at any angle of attack within the test range.

Quoting from the report in reference to the airplane starting in a 67 dive at about 160 mph (a very extreme condition): “Pulling the stick hard back to give a setting of β=+4.8 deg (front wing incidence) would give a positive pitching moment of about 800 lb. ft. at 100 ft/sec, or 4,500 lb. ft. at the diving speed.”

Clearly neither loss of elevator effectiveness, nor sudden control reversal was happening. This experimental result clearly contradicts both of the slot-effect based theories of the cause of the dive accidents.

A Caution and Some Early Understanding

Periodically, the advocates of an unconventional configuration will invoke some sort of “alternate physics” or some unique aerodynamic effect that appears only on the new configuration. It’s wise to treat these statements with great skepticism. The physics of flight are the same for everyone regardless of the type of airplane in question.

Interestingly, at least one Pou designer/builder understood this relatively early. E. L. Baynes, the designer of the Abbott-Baynes Cantilever Pou wrote about it in Flight magazine (Oct 22, 1936 pp 406-407).

The Cantilever Pou was significantly modified from the original HM.14. It exhibited better performance and good flying qualities with no tendency to tuck under.

Mr. Baynes noted that with the CG farther aft than 40% chord of the forward wing, the airplane would be unstable and stated that the far-aft CG positions of most standard Poux are “in the writer’s opinion the primary cause of the accidents to Poux in France.”

He pointed out that once the CG was moved forward enough to make the airplane longitudinally stable, the rear wing would be carrying relatively little load (particularly on the Cantilever Pou, which had an enlarged front wing, so the area of the front wing was almost twice that of the rear.) Accordingly, Mr. Baynes stated “the machine should be regarded as a monoplane with a large tail rather than as a tandem-wing machine”.

Mr. Baynes concluded: “Provided the Pou is correctly designed according to the accepted rules of the game (and I am sure that, fundamentally, it is perfectly sound), there is so much to be said in its favour…”

The article, and the preceding article entitled “The ‘Pou’ Situation” starting on Page 404 of the same issue of Flight are well worth reading.

(A complete archive of Flight Magazine is available online.)

The Flea as a Cautionary Tale

In many ways, the popularity of the Pou-du-Ciel and its subsequent troubles still serve as a warning to current-day homebuilders and experimenters. Henri Mignet had great enthusiasm for flying and laudable goals that still resonate. He wanted to make flying simpler, safer, less expensive, and more accessible to everyone. He created a new airplane configuration specifically to advance these goals. Sadly, he also exhibited a dangerous combination of haste, limited knowledge, and contempt for conventional practice. All of these contributed to the unfortunate outcome of his efforts.

Mignet did his development by cut-and-try experimentation. His book has descriptions of many minor accidents during development of the Pou. There is no doubting his courage. He repeatedly flight-tested his airplane after making major modifications in attempts to correct the cause of his last mishap.

Once he believed he had it right, he was in a great hurry to share the news. According to Mignet, his prototype had only 8 hours of flying time when he published his book.

This is not even enough flight test time to clear a recently finished example of an accepted type, much less properly test a new and unconventional machine. For perspective, consider that in the U.S., current FAA regulations dictate 25 hours of test time for a homebuilt with a certified engine/propeller combination, and 40 hours if the engine/prop combination is not certified.

Haste combined with aircraft development and flight test is an often-deadly mix. Things can get dangerous quickly if the designer plunges ahead believing that they know better than the established practitioners of the art.

Mignet called building and flying of Poux “Le Autre Aviation” (The Other Aviation). A good bit of his book is devoted to railing against the failings (in his view) of conventional design practice. Some of his concerns were valid given his goal to make his airplane simple, inexpensive, and easy to fly. Unfortunately, his apparent contempt for conventional practice caused him to violate some well-established principles for acceptable flying qualities and miss a critical flaw in his own design.

Second, and perhaps more important: Departing from conventional practice introduces significant risk simply because there is less body of understanding of a new or radical configuration.

The technical problems of the HM.14 that led to the fatal diving tendency were caused by a combination of factors. Some of these should have been obvious even at the time and some were more subtle.

As we saw, Mr. Baynes understood one of these quite early and clearly articulated the dangers of having the CG too far aft. This is a concern for all airplanes.

What was less understood is the effect of the vertical position of the CG, which introduced significant nonlinearity into the pitching moment behavior. This created the situation where the airplane could be stable at low speed/high angle of attack conditions and dangerously unstable when flown faster.

This was a direct result of the unconventional configuration and hence harder to anticipate. For most conventional airplanes, the vertical offset between the CG and the aerodynamic center is small enough that its effects are relatively small. Most designers treat the effect as negligible without causing any problems. For the Flea, and for trikes (as we saw a few months ago), the vertical CG position is a major player in the stability and safety of the machine.

What was particularly insidious about the Flea problem is that it produced a dangerous characteristic in a part of the flight envelope that is usually the safest and of the least concern. This highlights a serious issue with unconventional configurations: An effect that is negligible for a conventional airplane can be significant, and sometimes dangerous, for a new configuration. With careful, knowledgeable analysis and test, these types of issues can be discovered and solved safely.

Modern homebuilders and experimenters should take warning from the sad tale of the Flea. While talented amateurs have been responsible for some remarkable advances in personal aviation, those who succeed do not ignore the large body of knowledge produced by the more established part of the airplane design world.

Enthusiasm, and a belief you know better than your stodgy, convention-bound predecessors is not a safe substitute for knowledge and understanding. There is no magic, only clever design. The physics of flight are the same for everyone, and they remain utterly unforgiving no matter how enthusiastic the experimenter might be.

Next month we will analyze the Flea (to quote Mr. Baynes) “according to the accepted rules of the game” and see the source of its initial problems and how it was cured.