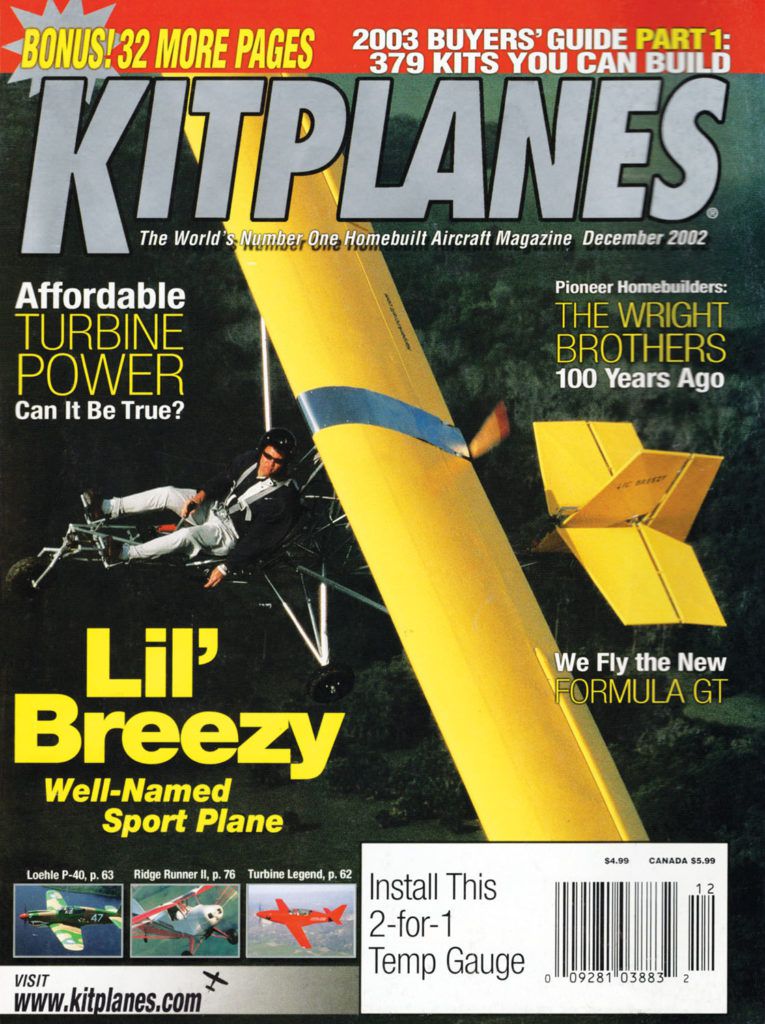 Eighteen years ago this issue, we put Jack Harper’s single-seat Breezy derivative on the cover that also touted the 2003 kit buyer’s guide featuring 379 different designs you could build. Back then, we separated the kits and plansbuilt designs in sequential issues, in part to keep the directory from eating the rest of this issue whole.

Harper’s “Lil’ Breezy” was powered by the Rotax 447 two-stroke and used a 25-foot wing with a Clark Y airfoil. The tube fuselage was all aluminum. Levy reported that “The 447-powered Lil’ Breezy takes off from grass in as little as 80 feet at 30 mph with a 170-pound pilot, and it climbs 500 fpm at 40 mph. With full power, maximum level speed is 63 mph.”

Editor Dave Martin recapped a bit of the Wright brothers’ history on the 100th anniversary of their historic glider flights that would lead to something much bigger. In 1901, the Wrights were “ready to give up,” Martin noted. “In fact, Wilbur was quoted at the end of their 1900 Kitty Hawk encampment saying he believed man would not fly for 1000 years. Their discouragement resulted in large measure from discovery of, and initial inability to control, what we now call adverse yaw.” The brothers persevered, of course, making 25 flights a day by October of 1902. “After storing the parts of their glider in the shed awaiting the 1903 flying season,” Martin wrote, “Wilbur and Orville headed for Dayton, knowing that sustained flight was a lot closer than 1000 years away.”

In the same issue, Howard Levy reported on the new Affordable Turbine Power engine, a modified Solar T62 turbine engine originally used as an auxiliary power unit for large aircraft. Weighing a claimed 187 pounds, the tiny engine was said to make upward of 240 shaft horsepower. We revealed the RV-4 testbed, and Levy quoted the company’s performance: “…initial climb rates exceeded 2400 fpm in the RV-4, and cruise fuel consumption below 12,000 feet has averaged 13 gph.”

Marc Cook - February 8, 2011
0
Selecting the right build location, having a solid plan and making a realistic budget are just a few of the things you can do to keep your project on track.