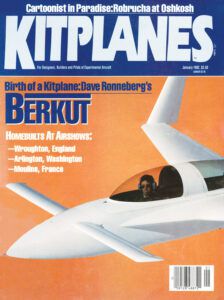 The pointy, provocative nose of the Berkut punctuated our heavily processed cover this month. Inside, it was the first of a two-part story on the Berkut called “Birth of an Eagle.” Named for a hunting eagle that was both light and powerful, the Berkut was the brainchild of Dave Ronneberg, veteran builder of multiple Long-EZs. (He’s listed as building a Starduster II, several Pitts, a Mong Sport, a Stearman, a Lancair and seven [!] Long-EZs.) The key aspects of the Berkut were to take the Long-EZ and make it bigger and faster. The fuselage was wider and longer than an EZ’s, with dual rear-hinged canopies (like an F-14), while the gear was fully retractable and the engine boosted to a 205-hp Lycoming IO-360. The “200+ mph” cruise speed came with a basic kit price of around $25,000. Six-cylinder versions followed the four-banger prototype and early kits. It’s reported that 75 kits were sold before the design, after passing through two corporate entities after the founders, was pulled from the market in 2002.

A few pages further on in this issue, Don Downie reported on Ed Kelly’s retractable-gear Long-EZ. According to the builder, the idea for the retracting main gear came from “a farmer friend and a folding system used on farm equipment.” Kelly claimed that the retracting main gear, which used an electro-hydraulic pump from a Lancair, was actually lighter than the original pieces.

Elsewhere inside the issue, Ron Wanttaja reported on the growing Arlington Airshow, dubbed EAA’s “biggest West Coast event.” He also called it “Oshkosh Light” and noted the challenge of scheduling a big airshow in the Pacific Northwest, when you have to avoid the July 4th weekend and Oshkosh in late July or early August. Indeed, the 1989 version was a “washout,” and the ’91 event Wanttaja reported on was rain-soaked on Saturday. Still, he said the organizers claimed a profit. That was the year Patty Wagstaff halted her show mid-routine when the controls “felt funny” and wisely chose to land. A mechanic had left a small plastic tool case tucked behind the Extra’s panel; it had fallen out and partially blocked the elevator control. Undaunted, the case was removed, and Patty took off again almost immediately to finish her show. A pro all the way.

John Larson reported on the final steps on his Avid Flyer project to prepare for the FAA inspector’s signoff. These included fitting the prop spinner, adding a few decals and making one more “final” inspection. He had the engine, a two-stroke Rotax, through its one-hour break-in and, with the FAA’s approval obtained, handed the stick to Avid’s GM Jim Metzger to do the first flight. Larson’s main problem after that? While he had started his pilot training some time before, he hadn’t finished it. He was not happy thinking about someone else flying his airplane’s 40-hour Phase I before he could use it for his own flight training.

Kitplanes - February 16, 2018
0
Constant-Speed PropsMy Cozy Mk IV has an MT constant-speed prop, and I have never...