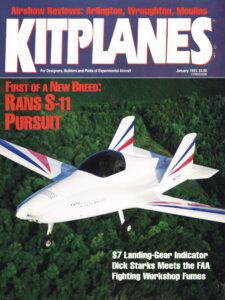 Our January 1993 cover featured the provocative RANS S-11 Pursuit. Howard Levy’s story chronicled Randy Schlitter’s already impressive resume at the time—nearly two decades of designing and building aircraft, starting with the S-3 Coyote ultralight—and recalled how the S-11 on our cover was actually the second prototype. The first crashed after the two-stroke Rotax quit and Schlitter had to put it back onto the Hays, Kansas, runway. He injured his back but the postcrash fire took the airplane. Randy described the S-11 as making 80% of its total lift in the body, with a 140-mph cruise on a Rotax 912. Purportedly, a total of three S-11 aircraft were built, but RANS never made it available as a kit.

Longtime contributor Dick Starks provided his firsthand experience getting an FAA signoff on his Kolb Twinstar. “My new lovely Kolb Twinstar Mark II sat there in the backyard quivering with excitement like it couldn’t wait to jump into the air and fly,” he said. It was “ready in every way,” or so he thought. With help from fellow builder Tom Glaeser and his father, Burke, Dick worked through the usual missed items and found himself ready for the inspection. “Aside from the debacle over the paperwork, the plane had come out pretty good,” he concluded. Later, “the first Twinstar flight was a pure joy. The hours of slow taxi-testing paid off; 15 seconds after a trouble-free liftoff, I had this plane trimmed to hands-off cruise.”

It says something about the industry overall in 1993 that many of the local airshows were doing well. Ron Wanttaja reported on the 1992 edition of the Arlington airshow, describing it as a “solid success.” The previous year, poor weather on Saturday—in the PacNW, really?—almost torpedoed attendance, but the ’92 edition saw superb weather over the weekend. Hit of the show? Delmar Benjamin’s Gee Bee R-2 replica. Plus: “Low cost and alternative engines were big at Arlington,” Wanttaja wrote. “Every nook and cranny held an automotive engine conversion on a test stand. Every one seemed intent on providing four-stroke reliability at low cost.”

Dave Martin reported in his Around the Patch column that the Wheeler Express program had been revived by Redmond, Oregon-based David Ullrich. Ullrich, a Lancair builder, had taken up the company after myriad difficulties descended on Ken Wheeler’s company and the four-seat, fixed-gear single along with it. The design passed through Express Design and eventually to Composite Aircraft Technologies, and grew from an IO-360-powered fixed-gear to an IO-540-powered RG.

Finally, we reported that the FAA had published the final rule for the new Primary category, a class of airplane with “simplified airworthiness certification and associated maintenance procedures for airplanes that weigh less than 2700 pounds.” While hailed as a “major victory,” the category was a dismal failure for its stated purpose, though it’s still on the books and has been used for simplified certification of some gyroplanes. Seems getting cost out of aircraft certification is a perpetual challenge. 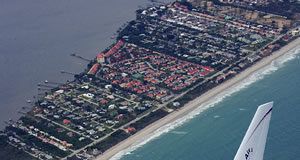