If you intend to fly your Experimental/Amateur-Built at night, good visibility is essential, and it stands to reason that your aircraft should be similarly equipped to the GA traffic whose company you’ll keep. Fortunately, there are numerous ways to achieve this, including incandescent, high-intensity discharge (HID) and light-emitting diode (LED) lights, or some combination of all three. When we last looked at aircraft lighting a few years ago (KITPLANES, June 2007), we discussed incandescent lights primarily, and LEDs only briefly, as they were not as common in Experimentals then as now. Since that time, the number and variety of LED lighting, both interior and exterior, have increased-and with good reason; LEDs have much to commend them and relatively little downside. Lets look at the pluses and minuses and take a peek at some of the products available today. 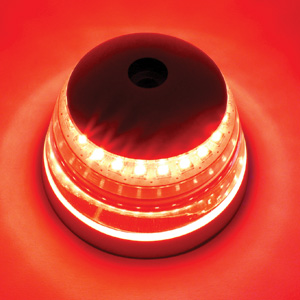 The rise of LEDs is a fairly recent phenomenon and can be attributed to a major development a dozen years ago: the creation of blue and white LEDs. Lighting products made from LEDs stem from their solid-state semiconductor construction. They produce light not within a vacuum but as a result of current passing over the semiconductor material. Because no electricity is passing through a filament, little heat is generated. Further, LED lighting is robust: There is no filament or glass to break, which is particularly advantageous in a vibration- and shock-filled (from landing) environment.

Energy efficiency is another factor, with some estimating that LEDs consume as little as 10% of the current draw of a similar incandescent product for the same light output, an important consideration given our increasingly avionics-heavy cockpit environments. Less current draw also means lighter electrical wiring, a desirable quality for builders of Experimental aircraft. They may also last tens of thousands of hours, which makes them suitable for installation in areas that are difficult to access.

The range of colors is another factor, with the chemical composition dictating the color variety. (FAA regulations stipulate the colors and brightness of exterior lighting for aircraft that will fly at night, but the lighting design choices within that range are many.) LEDs are also quiet, and therefore are unlikely to interfere noise-wise with radios and avionics.

There is some downside. LED lighting may need to be adjusted to change the direction of the light, as their area of focus may be more limited than that of incandescent bulbs. They can be pricey, though this will likely become less of a factor as more products come to market. However, one should consider the total cost of installing this lighting, including maintenance, life of the light, etc.

Some LEDs may dim over time and lose some of their brightness, especially when operated at temperatures outside the range of the design specifications. They may also lose their color intensity over time, which could affect their ability to meet FAA regulations, though maintenance should allow this problem to be addressed before it becomes a problem. And while LEDs may be as bright or more so than their incandescent counterparts, they may not be as bright as a Xenon bulb, for example.

The extra electronics in the lighting fixture to meet the same standards as the incandescent bulbs add to the complexity and cost of the LED lights. In some cases, the lack of heat produced with an LED could conceivably lead to snow and ice buildup that would melt with a hotter-burning light. Temperature buildup is also a possible issue for LED clusters such as those used in headlamps, and may contribute to degradation or malfunction. According to the phototonics.com web site, luminosity, which is the ability of the light to project a narrow, powerful beam as one would want for a landing light remains difficult to achieve, and high-intensity discharge (HID) lights may still be better for such purposes.

Obviously, exterior lighting is primarily a factor for those who wish to fly their aircraft at night, though most daytime VFR pilots will want extra illumination to increase visibility. Its interesting to note that during an airworthiness inspection, DARs may look at the lighting as a matter of course, but its more of a courtesy; the Phase I flight testing period is strictly day/VFR, and so no lighting is required. (Thats right…nothing at all.) 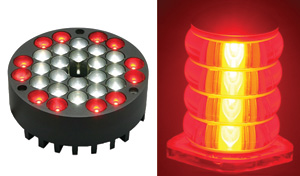 Still, if you want to use your airplane at night, you’re responsible as the manufacturer of the aircraft to install the required lighting that meets FAA requirements in terms of color and luminosity. Check your operating limitations for the specific wording; most often, the limitations specify that clearance for the new flight regime can be initiated by the builder when the appropriate equipment is installed. The requirements can be found in FAR 91.205 (night VFR or IFR lighting) and FAR 23.1397 (color), among others. Basically, for position lights you need an aviation red light on the left, an aviation green light on the right and an aviation white light on the tail (FAR 23.1389). Minimal anti-collision lighting, which may include halogen, oscillating beacon or strobe (including LED types) must produce a minimum of 400 ECP (effective candle power) in aviation red or white, 360 around the aircrafts vertical axis and 75 above and below the horizontal plane (FAR 23.1401). This coverage can be achieved with one or more lights Be aware of mounting wingtip lights in such a way that they provide the full coverage; some highly canted wingtips place traditional lights at an angle, which may in turn reduce the coverage area.

What should you be asking yourself when making exterior lighting decisions? Jeff Argersinger of Whelen Engineering says its design eligibility. In other words, does the light meet FAA requirements? If the light is TSOd, one can assume that it does meet the specifications; if not, more investigation may be necessary.

A quick perusal of the Aircraft Spruce catalog along with a Google search of LED manufacturers shows that there is a wide variety of LED lighting available for aircraft exteriors. Argersinger of Whelen Engineering predicts that the company’s Parmetheus landing light and taxi light replacements (PAR 36), which replace GE incandescent lights, will be big because they’re plug and play, requiring only a screwdriver for removal and reinstallation ($399). Whelens Microburst series of wingtip lights is also popular with homebuilders. The company offers a variety of LED landing and recognition lights, beacons, anti-collision lights and position lights, most of which are TSOd. The Whelen catalog also has an excellent guide to lighting requirements and placement. 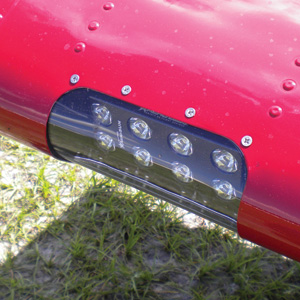 Nate Calvin, CEO of AeroLEDs, is a co-founder of this three-year-old company that has regularly been issuing new products since its inception. Calvin says the company will be introducing Sunspot 36, 46 and 64 (PAR 36, 46 and 64 replacements) at Oshkosh this summer (prices start at $496), along with a dual-service LED beacon/strobe. The company also offers the Suntail rear position and strobe ($396), the AeroSUN anti-collision/landing/taxi light system ($325 to $400), and the SUNLite lighting system ($190), a smaller version of the AeroSUN unit, among other LED products. AeroLEDs highest volume by part number is devoted to the Experimental market, Calvin said. The lighting is designed with the same mounting holes as legacy units and runs directly to aircraft power.

Aveo Engineering, which manufactures the AveoFlash series of LED lighting available through Aircraft Spruce, kit manufacturers and other retailers, offers a variety of lighting for Experimentals. Karen Nielsen is the North American distributor, and she said that in addition to its Andromeda ($1055) and AveoFlashLP (three-in-one nav/position/strobe) embedded (and non-embedded) position lights ($695/pair), the company will soon be showing its new Red Baron XP anti-collision beacon ($638). The company is also in the process of setting up Authorized Installation Centers (AICs), Nielsen said, for pilots who would like to fly in and have their light purchases installed. Also available is the E-Series PosiStrobe and PosiStrobe XP whose synchronizer circuitry means no external flash unit/strobe power unit is required ($262 to $307). 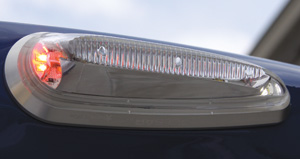 Mid-Sota Aircraft Technologies offers an LED aft-position light (taillight) for Experimentals rated at 20,000 hours, drawing only 30 mA of power at 8 to 32 volts DC. The light is available only through SteinAir ($90). Owner Tim Mahoney says that documentation substantiating compliance with FAA regulations is available upon request.

JMH Innovations offers LED navigation lights including a taillight ($210), a rotating beacon ($522) and a landing light ($511). The landing light also provides anti-collision flashing. JMH says the new rotating beacon meets FAA brightness requirements for night flight. The lights are molded into epoxy resins colored for the application, and are produced in Germany by Thiesen Electronics. JMH says it is the only importer in North America for these lights.

Also new and available for pre-order at press time from Aircraft Spruce is the Teledyne Microelectronic Technology LED landing and taxi light ($289), which the company says is anticipated to have FAA/PMA approval this summer. This is a drop-in replacement for the traditional incandescent lights including 4313, 4509, 4591 and more, and requires no modification to the existing mount. Teledyne Micro manufactures a wide variety of lighting and other non-aviation products.

Choosing exterior illumination for a homebuilt aircraft should not be taken lightly when safety is an issue. Educate yourself about the FAA requirements, and shop for the product that best meets your needs in terms of power requirements, performance, specifications, installation and maintenance, and price. Talk with other builders who have used the products. If the past is any predictor of the future, the options in LED aircraft lighting for Experimentals will continue to grow, making these decisions that much more difficult.

Dan Vance - July 16, 2021
0
As a new builder I came quickly to the step of needing to mark rib centerlines to align the ribs with the predrilled holes in the skin.