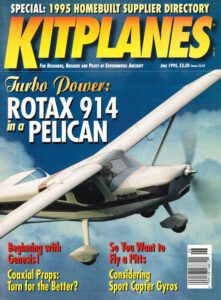 A turbocharged Pelican was on our cover of this issue. Inside, LeRoy Cook reported on the French homebuilt design’s kinship to the Cessna 150 during his visit to the Ultravia factory in Montreal. But the real news was the engine under the cowling, the freshly released Rotax 914. Based on the 912, the 914 added turbocharging for a rated 115 hp for takeoff and 100 hp continuous. (Remember that the 912 of this period was an 80-hp engine.)

“As with all turbocharged engines, I turned up the wick slowly until the throttle was half open, allowing the turbo to spin up, then released the brakes and pushed in the plunger for a rush of acceleration,” LeRoy said in the story. “…as we left the ground at 50–55 knots it was difficult to hold the nose high enough for the 65-knot climb-out figure…we timed 1800 fpm for the initial climb at 5800 rpm, after which we toggled the rpm down to 5500 rpm and lowered the nose for better visibility at 80 knots.” Weather precluded LeRoy from flying the turbo Pelican to altitude, but at low altitude he was seeing 125 knots indicated; Ultravia’s own estimates had the airplane at 132 knots true at 12,000 feet and 65% power. Way better than a 150.

Peter Underhill described flying his own Pitts S-1S, an airplane he described as “the sporting aviation world’s equivalent of a hyperactive hummingbird on heroin.” Hyperbole much? His thorough review of the Pitts’ flying qualities provided unique insight to those considering the design. “Like a Mustang, the Pitts S-1S is an airplane that most sport pilots would love to fly,” he concluded. “Believe me, your first experience in a single-seat Pitts (even if you’ve flown the S-2) will be simultaneously exhilarating and terrifying, but thoroughly memorable and enjoyable.”

Proof that builder series are nothing new, this issue had Gary Jones on Part 9 of his Glasair build, focusing on the slotted flaps. He concluded this installment noting that there was now two feet of snow in the yard and that he was going to be hitting the instrument panel next. Presumably inside, where it was warm.

Elsewhere in this issue we find another evergreen topic. In his “Wind Tunnel” column, Barnaby Wainfan broke from his usual theoretical subjects to take up builder modifications. “Wainfan’s First Law of Applied Aerodynamics states: ‘There is a surprise lurking in every airplane.’“ He offered several examples of builders making large changes to known, popular kits with terrifying results. He summed up the column in a way that holds true for builders in 2021: “Don’t modify casually. The key to successful refinement of a design is forethought and a clear concept of the goal of each change. Too often this is lacking. Many of the modifications I have been asked about come from a vague desire to make an airplane ‘better’ or ‘stronger’ rather than a clearly thought-out vision of what could be improved by proper modification.”

A full-page ad in this issue from Terra showcased its all-digital radios. Builders looking to put a lot of capability into small panels loved the Terra “half width” designs—each of the com, nav, ADF (remember those?) and transponder modules were half width, so a full set was not much taller than a pair of KX 155s (remember those?). Even as late as the mid-1990s, the idea hung on that radios could fail and that we should separate functions into individual units. What would the circa-1995 builder think of today’s fully integrated systems?