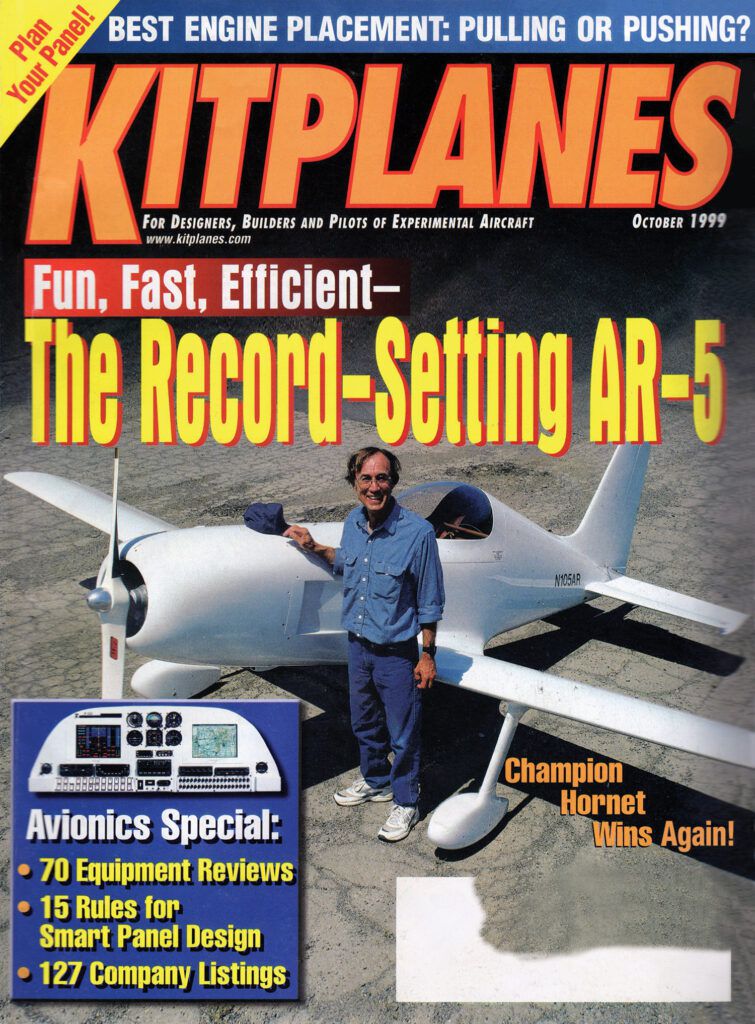 Mike Arnold’s hyper efficient AR-5 was on our October 1999 cover with a report by editor Dave Martin that posed an interesting question: Could the AR-5 be the world’s lowest-drag prop airplane? Powered by a mere sprite of a Rotax 582, the AR-5 set a class record in 1992 at 213 mph. You read that right: on a 65-hp Rotax, with a fixed-pitch prop and fixed conventional gear. Editor Martin flew the airplane with a climb-biased prop but still managed to record a high-speed data point of 165 knots indicated airspeed. He noted that the Rotax could easily have exceeded redline with that prop. Dave offered Mike Arnold with perhaps the ultimate compliment, comparing the AR-5’s handling to the F.8L Falco, considered one of the nicest handling, best balanced piston airplanes in the world.

At the other end of the speed spectrum, Howard Levy reported on a lightweight that won Sun ’n Fun’s Grand Champion award in 1999. Ron Bean’s stunningly
detailed Hornet featured a 65-hp Hirth engine and a Warp Drive prop. Dave Martin (who clearly had a busy month) reported in a sidebar on the Hornet from the pilot’s perspective, noting that the Hornet was “lively” when flown solo, with neutral rather than positive pitch stability. With two aboard, which brings the CG forward, the Hornet was more conventionally behaved.

Two designs that appeared to have promise appeared in ads this month: the Dyn’Aero MCR-4S, to be distributed by American Ghiles Aircraft, and the DreamWings ultralight. Neither the four-seat MCR nor the DreamWings made it to market. A product that was more than a little successful was Lance Turk’s Vision Microsystems engine monitor. The LCD-based system predated other all-in-one engine monitors by quite a lot and was much more sophisticated than most people realized.

Jim Weir’s Aero ‘Lectrics column this month provided a DIY mag-timing tool project powered by AA batteries that also provided both a light and sound indication of when the points come open; even better, Jim designed his box to have three sounds, for both mags closed, just one closed and with both open.

Finally, Bruce Carmichael took up the question of whether it’s best to have a pusher or tractor propeller. He considered not only the aerodynamics of the situation—where the tractor’s propeller benefits from being in clean air but the fuselage does not, while the reverse is obviously true for pushers—as well as things like CG limits and landing-gear configurations. In the end? “The majority of propeller-driven aircraft are tractors for good reason: This is the way they work best. Almost all safety and practical considerations favor the tractor.”

Glasair Aviation to Restart With Kits, Not Two Weeks to Taxi