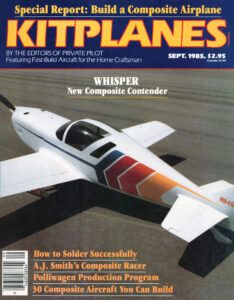 Way back in the early issues of KITPLANES®, when we still felt the need to say “by the editors of Private Pilot” on the cover, Robbie Grove’s GR-2 Whisper composite was on the cover. With a new “composite contender” on the cover, we also highlighted a special section on what it might take to build a composite airplane and had a listing of the 30 composite aircraft then on the market. They included names most of us recognize today, including Lancair (under Neico) and the Glasair models (under Stoddard-Hamilton) as well as the aforementioned Grove, the Lancer White Knight, the Cozy, the Rand-Robinson KR series, the Star-Lite (which would become the Pulsar) and the Rutan Long-EZ (spelled LongEZ in our guide), Solitaire and Defiant.

Dave Martin, who at the time was “merely” senior editor on the magazine as founder Dennis Shattuck remained atop the masthead, wrote up the story on Robbie Grove’s GR-2. At the time of the story, Grove was in the very early stages of test flying—no small thing when it’s a one-off design—and had decided that engine cooling needs dictated abandoning the annular air inlet or the small gap between the spinner and the cowling. Martin noted that Grove put in about 4000 hours building the composite prototype, which had a predicted max gross weight of 1800 pounds and, briefly, saw impressive climb performance on just 160 hp. Alas, the GR-2 was never produced as a kit, and Robbie Grove went on to develop his world-famous landing-gear and brake empire.

Also in this issue, Don Downie spotlighted the work done inside Ken Brock’s growing facility in Southern California. “From [this] shop comes more top-quality metal parts for homebuilt aircraft than from anyplace else in the country,” Downie said. Aside from the KB-2 gyroplane, Brock and company were intensely busy building metal parts for such kits as the Long-EZ and the VariEze. (Then, as now, companies tend to focus on their strengths, so the composite builders get good with the glass and let the necessary metal parts be made by those with the specific know-how.) When Downie made his visit, Brock was in the process of building 25 kit sets for the Avion ultralight.

Nick Pocock outlined the cute-as-a-button Fisher Koala. Highlighting the simplicity of the Rotax 277-powered airplane, Pocock wrote, “If the fuel is turned on and the controls are working correctly, then the takeoff check is complete; there’s no mag check with a single ignition, and the float-and-wire type fuel gauge in front of the pilot’s eyes gives a constant indication of the tank’s contents.” On the flight test, he noted that “the windsock was swishing from side to side like the tail of an angry cat…so I held the nose of the Koala down on the takeoff run to get a positive break from the ground when ready. By the time I had reached the far end of Heathrow’s (TE17, near Waco, Texas) 2000-foot-long runway, I had reached standard pattern altitude.” For his second landing, Pocock noted, “Once the ultralight is heading into the wind, groundspeed is very slow. I added a trickle of power to wheel it up the [runway] slope, but as the solid tailwheel settled to the ground, I could feel every little bump through the delicate airframe. It rolled to a standstill without need for any drastic control actions.”

In addition to the composite special section, we had a flight report on the Polliwagen, a builder tip on using composites to create your own custom fuel tank and a primer on proper soldering by Ed Maher. The mostly black-and-white magazine was 100 pages this issue, and you could feel the breadth of choices in our world about to grow and the momentum building.