This December issue brings us to the end of a yearlong celebration of the first quarter century of KITPLANES. Now that we have examined where we’ve been, where are we going? Good question, if a very difficult one to answer.

From the dusty pages of our back issues are prognostications that widely missed the mark. Flying cars built in your garage for very little time and money. Auto-engine conversions taking over for the traditional dinosaur engines. Fly by wire. The lightweight, fuel-efficient turbine engine. Still waiting? Me, too.

Which is why when someone asks me to predict the next 25 years, my first response is: Dang if I know. Who could have looked ahead from the 1970s to predict that a quiet man by the name of VanGrunsven would grow his conservative, honest-performing line of aircraft into what has become the industry juggernaut? Who would have guessed that the fabled Glasair/Lancair rivalry would diminish to a few friendly soft-tipped arrows launched across the Washington-Oregon border?

You see the problem: Were all too close to the ground to see the long-range trends, and we cant predict what external forces will do-including the overall economy, fuel costs, user fees, airport access, FAA regulations on aircraft and airman medicals, to name just a few.

Undaunted, Ill cast my line into the stream. I have difficulty seeing any single company stand up and challenge Vans. There’s simply too much of a head start here, with too many contented customers-and still the enduring desire to work in metal continues. If you worked hard, you might be able to design a simple, two-place homebuilt that goes faster, lands slower, looks sleeker and is easier to build-but not all at once. New designs will emerge, from all over the globe, but advances are likely to be focused on ease of fabrication and assembly. 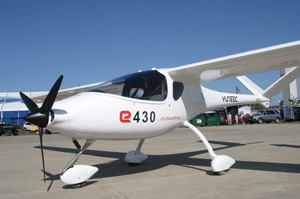 Electric aircraft, like this factory-built Yuneec, could change the landscape in the next 25 years.

Gasoline engines, ever the technological driver in aviation, will continue to evolve slowly. How many times have we heard that the air-cooled, pushrod, direct-drive aircraft engine is on its death bed? Once I came to appreciate the excellent engineering done by Continental and Lycoming in the 1950s and 60s, I realized that these powerplants are uniquely qualified for the role. But there is, as well, a chicken-and-egg effect here. The small-displacement, opposed-cylinder engine was the first to be thoroughly developed for GA use, and the airframes to use this kind of design followed.

For homebuilts, the early days were about scrounging from factory-built castoffs, and so our existing kits have been built around these engines. That hasnt changed much, though we do have the benefit of improved engine controls in the form of electronic ignition and Experimental-only fuel injection schemes; still, were all waiting for FADEC or some form of full electronic control to emerge at the affordable end of the spectrum. (Lycomings IE2 system has tons of promise, but its not likely to be inexpensive.)

Im becoming encouraged by electric aircraft, but not for the reasons you might surmise. I believe that a large segment of general aviation will move toward the European paradigm, mainly for reasons of cost (fuel, insurance, training) and social pressures. If we move toward light aviation being about the enjoyment of flight rather than an alternative to airline travel, electric aircraft make a lot more sense. Sure, the technology has a long way to go, but there are external drivers that can share the development costs. Thats the best news for us.

So, whats in store for KITPLANES? To be honest, I don’t have a 25-year plan for this magazine, but I do know this: We will continue to be responsive to the community and focused solely on Experimental/Amateur-Built aircraft. Well prevail as a prime resource for honest aircraft evaluations, hands-on content, informed commentary and all that goes with it. We are deeply involved in the industry. This magazines group of editors and contributors (myself included) do more than talk about homebuilts, we actually build and fly them. Even as we branch out into multimedia and update our online presence, well work hard to remain valuable (and slightly waggish) but above all, real. Just like the last 25 years.