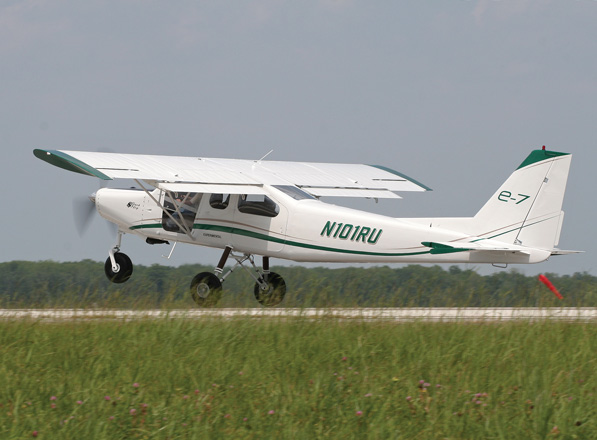 Liftoff with the flaps up. With flaps fully extended, landing rolls can be impressively short.

Do you need a really big, stout backcountry airplane, big enough that you can stand with a foot of headroom under the wing-that is, the little wing in the back? In case you do, you should know about the Russian E-7 Bush Hog. 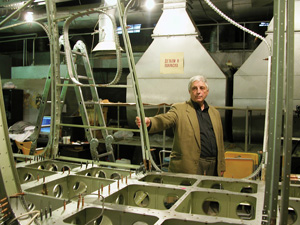 Owner Eduard Grishkov poses with the fuselage in Russia. Parts are CNC manufactured, and some are hydroformed.

The prototype is licensed as an Experimental/Amateur-Built and is flying in the United States. Aluminum stock is shipped from the U.S. to Russia, where a coalition of engineers calling themselves the E-7 Group makes parts, CNC cut and some hydroformed, and completes the airframe to quickbuild stage before shipping the parts back to the U.S. for completion and flight.

Director Eugene Novinsky provided the translation in conversations with designer Aleksandr Andreev, who explained details of the prototype at AirVenture. The wing was originally designed for a different, fabric-covered aircraft. Hence, it has both conventional, full-chord ribs and nose ribs. A further distinction is that the leading edge is flush riveted, as is the case with all the flying surfaces, but the rest of the wing is pulled, not bucked, rivets. The airfoil is a 4315a, which is considered a good low-speed choice. Otherwise, Andreev says he would have used an equivalent Russian airfoil.

As is the case with many prototypes, there are several details that will be redesigned before a full kit is offered. For example, the huge inboard flap tracks interfere slightly with the baggage doors, and the wing design will get more attention. The philosophy of the airplane, simple, strong, maintainable, will be retained in the classic Russian tradition. After all, the Yak-15 jet fighter had a hole in the nose so that it could be towed across unpaved surfaces with a tractor. 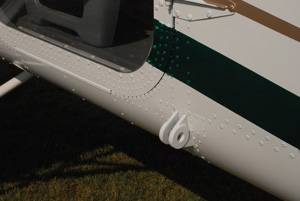 You can put it on floats with these standard fittings.

The baggage doors are big, like everything else on the plane: 40 inches wide and 4 feet high, opening to a baggage area that is big enough for, say, a hot tub. In the front seats, the instrument panel is so expansive that you might be concerned that each instrument would get lonely. With tricycle gear installed, ground visibility through the flat windshield is excellent.

Way up front is an eight-cylinder, 400-horsepower Lycoming IO-720 with considerable down thrust on this prototype; that is, the engine is canted noticeably downward, probably to improve stability. But the brochure lists turbine options including an M-601, PT-6A and TPE-331. Turbine engines would increase the horsepower from 400 to 750, gross weights from just over 5000 pounds to just under 6000, and payload from 1900 pound to 2700 pounds. Standard tankage is 119 gallons, expandable to 265 gallons for the turbine version.

Even with the extra power, this huge, backcountry airplane is not going to be a speed demon, particularly with the oversized wheels. After 30 hours, test pilot, sales manager and Boeing 777 pilot Richard Hess reports real-world, cross-country cruise speeds of 117 mph with the piston engine. This speed would vary, of course, with how much fuel you want to burn and whether you have the plane equipped with a nosewheel, tailwheel or floats. Figure more than 20 gph with the Lycoming running 75% power; more likely, youd run it much more gently and get the efficiency headed in the direction of acceptable.

This plane has huge tires (three of them) and stout landing gear all hanging out in the breeze. The company is looking at speed improvements such as changing the angle of incidence of the wing. The incidence of the horizontal stabilizer is already field-adjustable to get minimum trim drag in cruise. 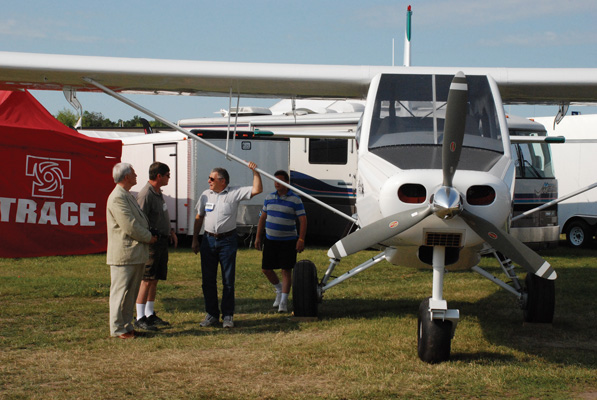 The Bush Hog is a big airplane. Refueling requires not just a ladder, but a tall one.

But at the other end of the speed range, the huge wing with a 44-foot span and ginormous flaps (thats the best we could do translating from Russian) bring the advertised stall speed down into the low 40s on the piston version. Hess reports that he has landed in distances as short as 300 feet, but 500 feet is more typical. Small spoilers over the outboard ends of the flaps help with roll control at low speed. Takeoff over the standard 50-foot obstacle is advertised as 600 feet in the piston version, and 100 feet less in the turbine version. 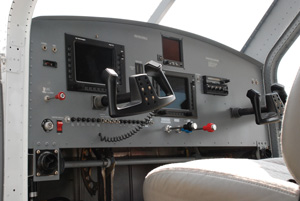 The instrument panel is huge, big enough that each pilot should have his own flight instruments.

We got a quick ride in the E-7 as AirVenture 2009 was winding down. In the back were the first two E-7 passengers, designer Andreev and Eduard Grishkov, the owner of the E-7. In the front right seat, I was only the third pilot to handle the E-7s controls. Hess started the Lycoming IO-720, and it idled with a deep, wonderful sound like a radial engine only without the irregular lope.

With a certified engine-and-prop combination, the Bush Hog was given only a 25-hour test period, and had about 30 hours when we flew it. Its worth emphasizing that we flew the first and only prototype, and the early flights, as with other prototypes, have shown a number of opportunities for the tweaks and adjustments that make all the difference. The good news is that the development team is on top of the opportunities.

The trailing link nosewheel, for instance, will undoubtedly be replaced with a conventional fork design. The nosewheel was at one point designed to be steerable, but the steering was omitted on the prototype. Thats an easy fix to the currently clumsy ground handling, because the trailing link does not swivel easily with differential braking.

In the air, the lack of wing dihedral gave the plane a feeling of having low-wing yaw stability, rather than the traditional high-wing, rock-solid yaw stability. On the ground, it looks like the wings have anhedral (bent slightly down rather than slightly up), but this is an optical illusion. Hess demonstrated in flight that there is indeed a dihedral effect, meaning that the plane will turn with just rudder and develop some roll while doing so. 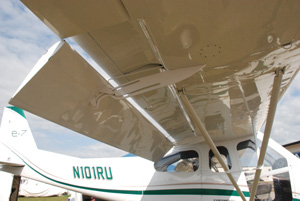 My attempts at flying the plane precisely were thwarted by sunglasses that blocked some of the colors from the primary flight display, but even after taking off the sunglasses, the display was too far away on the other side of the panel for me to read. Some turns and simple handling checks showed nothing untoward, but this not-yet-tuned-in prototype had the heaviest controls of any plane Ive flown. Hess demonstrated that maneuverability is there with smooth and gentle wingovers, left and right.

Handling aside, the short-field performance is spectacular. Hess flew the pattern at Fond du Lac and put the E-7 right on the numbers, touching down as gently as you please after a beautifully flown approach at 61 knots. Moderate braking had us stopped in 600 feet or so, and thats what the E-7 is all about-hauling a huge load into a tiny field. There are good minds at work on this project, and it will be fun to watch the design come into its own, for the potential is clearly there.

Can You Get One?

Prices for the kits are advertised as $120,000 for the piston version and $10,000 more for the turbine. Quickbuild prices are $216,000 and $234,000, with the price differences piston/turbine being in the wings; the heavier turbine aircraft will have more structure in the wings.

The company’s principals are thinking about certification of the E-7, but they are well aware of the extra zeroes that would add to the overall development cost. They believe that in production, it might cost half that of the larger Cessna Caravan, and a third less than the Quest Kodiak. But in the homebuilt world, the E-7s only competition in the aluminum bushplane market may be the AeroTek Grizzly. Plus, the name Bush Hog might not survive a trademark search, much to the disappointment of the men at International Jets and Hess paint and avionics shop, who came up with the moniker.

Left: The huge landing gear looks ready for any challenge. The plane can also be configured as a taildragger. Right: The nosewheel strut mounts to the obviously beefy motor mount.