And so it begins. It’s been just a week and a half since we returned from a visit to Florida for the Sun ‘n Fun fly-in, where the weather cooperated gloriously.

During the week we watched Dick VanGrunsven studying the cockpit of his first homebuilt, the RV-1, to determine whether he would fit into it decades after the plane was originally built. By the time Friday rolled around, the Friends of the RV-1 team were pretty certain they’d come up with a way to make this happen. But seeing VanGrunsven ponder the problem each day was a testament to his sustained interest in even the earliest of his designs. 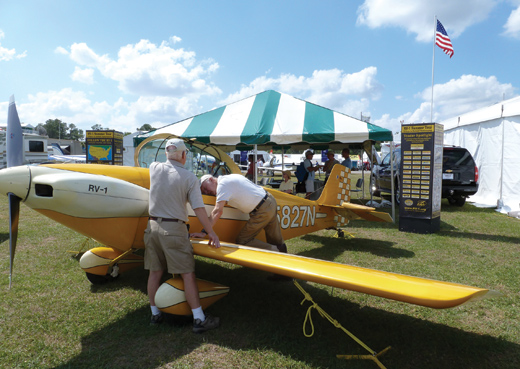 I’ll offer a few other tidbits from the show that we hope to learn more about in coming months:

• The Progressive Aerodyne group had a folding-wing version of its kitbuilt SeaRey amphibian that was being road-tested to see if it would hold up well under the pressures of trailering. If it does, this option may make an appealing design even more so.

• Garmin had announced its new navaid Pilot app for tablets and smart phones just before the show, and offered a demo of its crisp and straightforward trip planning, weather and e-flight bag capabilities. Company reps said they are working on a number of new things for Oshkosh, but would not elaborate.

• Glasair Aviation’s Mikael Via said the company is now using the Advanced Flight Systems 5000-series EFIS in its Sportsman panels, and the new units were displayed at AFS’s booth. The design combines high-speed microprocessing with 8.4- (AF-5500) or 10.4-inch (AF-5600) high-resolution LCD displays. Knobs that function as buttons help eliminate the need for menus used in other EFISes.

• JP Instruments showed its new EDM-900 engine analyzer, whose small size and VGA display make it a nice choice for panel-space-challenged homebuilts. The full-featured single-engine primary instrument has a rectangular face but fits in a 3-inch round hole.

• Corbi Air’s Alto LSA out of the Czech Republic was on display at the LSA Mall. The company claims it is the first LSA with air conditioning, which adds about 22 pounds to the weight without an alternator and 35 pounds with one. The AC unit will also be sold separately. The Alto can be built from a kit, and the anticipated price is $45,000 to $50,000.

• Marc Ausman of Vertical Power exhibited his remarkable new VP-400 backup EFIS that can fly the airplane to the best runway in an emergency situation. It is being included in the panels of some Lancair Evolutions, among others.

• World Aircraft Company displayed its new Vision/Sentinel aircraft, which are one and the same except the Vision is intended for the kit market, and the Sentinel will be outfitted for government/law enforcement work. WAC also plans to introduce a low-wing design at Oshkosh.

• Velocity’s intriguing V-Twin was on hand, having accumulated a few hours before arriving. One of its more visible features, beyond the twin engines, is a large and distinctive tail.

Overall, SNF seemed lightly attended, though the hangars were bustling in the afternoon. Some major players such as Cirrus were noticeably absent. The LSA and ultralight areas were sparsely populated, and there was talk that the LSA Mall, ultralight and rotorcraft areas might be combined next year. Aerotrek’s Rob Rollison had a wonderful idea about a “panther path” that would wind through the trees (providing shade) and link the main show grounds with the outlying exhibits, offering a variety of vendor wares and refreshments along the way.

Still, it’s quality not quantity that vendors heed, and we heard from more than one kit manufacturer that they had sold airplanes at the show. The feeling among some we spoke with was that despite the competition in our arena, we’re all in this together, and the goal should be to grow the homebuilt community so that the rising tide will…well, you know. Sounds like a good idea to me.

Roy Beisswenger - August 10, 2012
0
Should powered-parachute and trike pilots have the option of earning a commercial license? By Roy Beisswenger.