A key technology featured in this months cover airplane is Lycomings IE2 electronic engine management. As you’ll see in Doug Rozendaals feature, the Lancair flies strongly behind this version of the venerable TIO-540, and Lycoming is working at what might well be a feverish pace to get IE2 real flight experience to go along with all the test-cell time. The goal is certification of the system, a none-too-easy task in todays climate. The larger picture is to get us moving toward engines that can take unleaded avgas.

While builders of Experimental/Amateur-Built aircraft have embraced new technologies-particularly, where engines are concerned, in the area of alternative ignition systems-owners on the store-bought side have been far more conservative, beyond even what the certifications rules push on them. Unisons LASAR part-magneto ignition system has not sold well, and one can only characterize Teledyne Continentals efforts with its FADEC as a failure. What started out as so much promise in the 1990s ended in suspension of new sales, even to homebuilts. 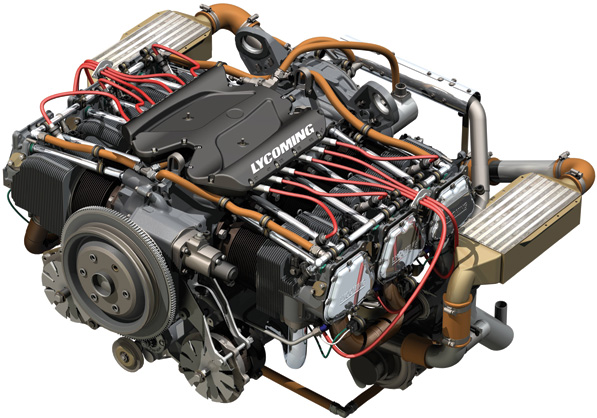 Lycoming has been down this road before, too, with something called EPiC, which was a half-measure that used electronic manipulation of existing mechanical systems; it never made it past the initial design stage. Now we see IE2, a horse of an entirely different color. IE2 is very sophisticated, using modern multipoint fuel injection, individual cylinder/plug ignition and, a first for aircraft use, knock sensing. Whats more, Lycoming is viewing the development of IE2 as more than a pay-no-mind replacement for the throttle, prop and mixture controls.

Says Mike Kraft, Lycomings recently installed general manager, The big picture here on the IE2 concept is not about ease of starting [or whether the engine runs rich or lean of peak EGT], but rather the future, where the pilot does not need to be concerned about engine management. Just flying. As an industry, we’ve trained pilots to look at certain things that will be very hard to deprogram.The transfer of enginemanagement from the pilot to the engine ECU will likely be a huge area of deprogramming to address. In fact, we fully expect that pilots who are trained and proficient on complex/high-performance aircraft may even feel uncomfortable with the engine ECU taking over these functions.

The future state impact will affect pilot workload, cockpit complexity, and perhaps even required endorsements and insurance. The more visionary question to be asked is, Will a high-time performance pilot endorsement still be warranted on an IE2 equipped [Cessna] T182? What about insurance premiums? Total cost of ownership? One does not need to look very far beyond the impact of the introduction of the glass cockpit to General Aviation. The IE2 functionality presents a similar, though less visible to the pilot, impact that we firmly believe will reduce the total cost of ownership with the removal of pilot engine management, allowing pilots to focus on flying.

The engine-control philosophy running the IE2 is going to rankle some savvy operators, I believe. Kraft says that, IE2 operates at the maximum efficiency mixture for the requested power. That means that it could be LOP [lean-of-peak EGT] to ROP [rich of peak] (and all between) depending on what PLA [power] is requested. At 100% [power] it is for certain ROP. Tail back and it will go LOP. The logic we have incorporated is very different from the classical leaning method. IE2 is not just replicating the pilots actions. We are much more like the automotive/performance motorsports approach.

In Krafts vision of the future, IE2 looms large as a benefit to pilots and a way to improve aircraft efficiency and reduce maintenance costs. What IE2 will not do, however, is just as interesting.

Kraft is among those strongly campaigning for a true 100-octane fuel replacement, and brings forward the idea that electronic engine controls will get us only so far, that they are good for just a few octane-points of detonation margin in high-performance engines.

Lets think about that position for a moment. In the industry we now have three front-running alternatives for 100LL leaded avgas, which has been on the way to the gallows for nearly two decades. (But recent noises from the Environmental Protection Agency are signaling that the rope is finally up and the trapdoor set for leaded fuels in this country.) One alternative is SwiftFuel, made from sorghum and switchgrass; it appears to perform well as a 100LL replacement but questions of processing efficiency and end cost hang over it. Another alternative is G100UL, a mixture of unleaded avgas base stock and commonly available additives. Finally, there is 94UL, which is 100LL without the lead. Lycomings chief competitor has moored to the 94UL dock. (Yes, I know there are other fuels that might be suitable, including ethanol, but were talking here about drop in replacements, fuels you could use tomorrow with little or no modification.)

According to Kraft, Lycomings tests show that 94UL will simply not do the job in high-performance turbocharged piston engines, even with electronic controls. In order to preserve reliability and power, a true 100-octane fuel must be found. His position is somewhat at odds with the prevalent belief that a slight alteration in ignition timing will allow most engines to use 94UL. That may be the case for non-turbocharged engines with standard compression ratios, but any engine boosted by a turbo or high-compression pistons has inherently thinner detonation margin. When does thin turn to none? Ah, there’s the problem.

The fuel issue is thorny, and impacts owners and builders of Experimental/Amateur-Built aircraft uniquely. In the next issue, well take up a more in depth discussion of fuels, and how homebuilts might be expected to weather this storm. In the short term, I would reconsider ordering those super-high-compression helicopter pistons for your unfinished project. A traditional Lycoming or Continental might well be happy with more compression-as long as you feed it good, old-fashioned 100LL. How much longer you’ll be able to do that is very much an open question.

Kitplanes - September 4, 2020
2
Our October 2000 issue featured the Stolp Starduster Too, a huge section on readers...