Adverse yaw. That’s probably what your instructor cited as the reason you need to apply coordinating rudder when making turns. Move the stick left, and the nose yaws to the right. Maybe that’s all the explanation you received at the time, which was probably appropriate for your first few flight lessons. It’s true that most folks define adverse yaw as the airplane yawing in the direction opposite the intended turn direction when insufficient coordinating rudder is applied. True enough, sort of. But there’s more to the story. 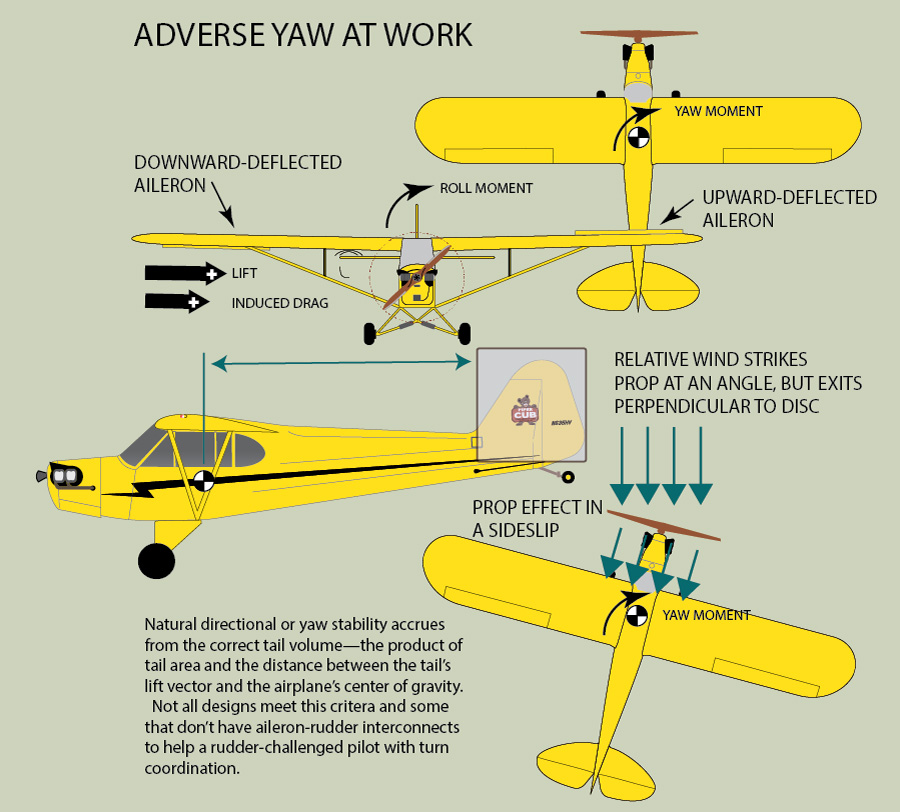 Some designers try to minimize this effect with differential ailerons. That means the control gearing is such that the downward-deflected aileron deflects less than its upward-deflected counterpart. The less the aileron is deflected downward, the less lift it creates and the less induced drag results. Makes sense. Sometimes it works; sometimes it only helps a little.

Other designers opt to use spoilers rather than ailerons for roll control. In this scheme, moving the stick left raises the spoiler near the left wing tip only. Since the right wing remains clean, there’s no drag increase there. The raised spoiler reduces the lift of the left wing —that’s why it’s called a spoiler. With the right wing now making more lift than the left, the airplane rolls left-wing-down (LWD). Sticking a spoiler panel into the air stream also creates parasite drag, which creates a nose-left yawing moment. Since this yaw is in the same direction as the turn, it’s called proverse yaw. Could be a good thing, but too much can make flying counterintuitive in that having to apply right pedal to coordinate a left turn goes against tradition and pilot expectation. Spoilers are more effective at higher airspeed, which is one reason you don’t usually see them on many general aviation and amateur-built airplanes.

Still other designers acknowledge their basic airplane aerodynamics might lack the proper vertical tail volume—the product of tail area and distance between the tail’s lift vector and the airplane’s center of gravity—and incorporate an aileron-rudder interconnect. In these schemes, the rudder is mechanically linked to the aileron control circuit, so that left stick also causes the rudder to deflect trailing-edge left. Handy for those pilots whose feet are otherwise occupied during turns.

While the differential drag due to aileron deflection is the commonly understood—and usually predominant—source of adverse yaw, there are other culprits contributing to your rudder activity workload.

Let’s say you apply left stick from a straight-and-level flight condition. Before the airplane turns, it rolls. To keep things simple here, let’s only look at the rolling portion of the maneuver for now. As the left wing moves downward, the relative wind approaches it from below the airplane’s flight path. Visualize it this way: In straight-and-level flight, the relative wind comes essentially from directly in front of the wing.

As the wing moves downward, most of that relative wind still comes from the front, but some now also comes from below. Now harken (yes, I said “harken”) back to your early ground school days when you learned that lift acts perpendicular to the relative wind. In our idealized straight-and-level condition, lift acts upward. When rolling LWD, the wind approaches from in front of and below the wing. Acting perpendicular to the relative wind, the lift on this wing acts upward and forward. That forward component of lift on the left, down-going wing imparts a nose-right yawing moment. Similarly, the up-going right wing has its lift vector acting forward and slightly aft, because the relative wind approaches from above the up-going right wing during a left roll. That aft lift component on the right wing also imparts a nose-right yawing moment. Yawing right while attempting to roll left is adverse yaw, and this one is usually called yaw due to roll.

The propeller of a typical tractor design also exacerbates the adverse yaw situation. This one’s a little trickier. Picture your airplane in a left sideslip. The relative wind approaches the prop disc from slightly left of the airplane’s nose. The propeller’s job, however, is to propel the air through its disc perpendicularly. The air enters the prop disc from the left, but it exits perpendicular to the disc (more or less). This action of changing the direction of the mass of air flowing through the prop disc creates a nose-right reaction force.

The higher the power setting, the stronger this force. While the propeller doesn’t cause adverse yaw, it does make it worse once it’s created. A pusher configuration with the propeller behind the airplane’s center of gravity has the opposite effect.

Most airplanes have naturally restoring qualities when it comes to yaw excursions. When an airplane yaws, its nose moves to the left or right of the relative wind. Let’s say it moves right for the following explanations: That relative wind from the left means the airplane is in a left sideslip. Directionally stable airplanes don’t like sideslips.

The vertical tail’s primary job is to minimize sideslip excursions and to restore the airplane to sideslip-free flight once a yaw excursion occurs. This one is fairly intuitive. It does the same job as feathers on an arrow. An airplane in a left sideslip has the relative wind approaching the vertical tail from the left. This makes the tail want to move right, creating a restoring nose-left yawing moment.

You can observe this in most small airplanes by making an abrupt—but small—lateral stick input. As the airplane begins to roll (left again, of course), you’ll notice its heading doesn’t change much, if at all, until you stop the roll rate. As soon as you do, the nose swings left. This is the airplane’s directional stability kicking in. You didn’t see it sooner because those adverse yaw creators were just as strong as the vertical tail’s directional stability contribution. Remove the adverse yaw sources, and the tail then does its job of swinging the nose back into the relative wind.

Here’s another helpful contributor: If the airplane yaws nose-right, the left wing is moving faster through the air than the right wing. Other things being equal, the faster wing generates more lift and therefore more induced drag, opposing the adverse yaw.

Although airplanes can be flown out of balanced flight, it adds drag, makes heading roll-outs less precise, can be uncomfortable and is just bad piloting technique. Unless airplane re-design is a viable option for you, the best way to deal with your airplane’s adverse yaw characteristics is to use your feet, just like you were taught.

Ed Kolano is a former USMC A-4 pilot who’s worked as a test pilot for 25 years. He’s flown more than 200 types, including more than 60 amateur-built and Light Sport Aircraft. He’s written 200+ technical, educational and flight review articles and holds a handful of big airplane type ratings.