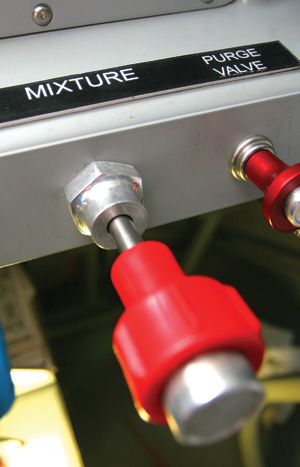 Maybe Im just simple. But while I love high technology and would be a great candidate for testing something like the Precision Eagle EMS featured in this issue-Im not hinting, just saying-some part of me keeps coming around to this thought: Were way too worried about engine management.

How do I know? I field questions every day on the computer and out at the hangar from pilots wanting to know the best way to run an engine. I hear from engine shops that the same questions are shot their way. This topic is as common as “Whats the best primer?” on many online bulletin boards.

Lets not make it difficult. A normally aspirated-that is, not turbo- or supercharged-flat engines performance is only “critical” in a small part of its operating envelope. Its during takeoff and the initial climb, when power output is high and cooling airflow limited, that you must pay it close attention. Fuel flow is crucial. My IO-390 is set up a tad on the rich side, burning nearly 20 gph on takeoff. A conservative max fuel flow is around 0.55 pounds per hour of fuel per horsepower. A figure of 0.5 is normally best power.

Proper high-power fuel rates slow the combustion event and help moderate cylinder-head temperatures (CHT), and both results help increase the engines detonation margin. (This assumes fixed-timing mags or electronic ignition that runs at the specified advance during high power; anything else, and you’re the test pilot.) So if its assumed that takeoff is full rich at sea-level airports, what do you do in the climb? It really depends on the engine, but once airborne, I let CHT be my guide. From experience, I know that I can manually lean to a target average EGT of 1300 F, and the engine will stay cool unless Im climbing slowly or its been heat-soaked before departure. My Dynon EMS-D120 is set to give a warning at 380 CHT, and I insist on keeping all heads below 390. The EGT bars can be color coded, too, and I have them set to turn from yellow to green at 1300. One glance at the monitor, and if everything is green during the climb, the engine is happy. If I see yellow bars, I know to lean slightly as the climb progresses. If I see a yellow CHT block, Ive leaned too far. Simple as that.

In cruise, its easy. Prop stays at 2500, where its been since passing 1000 feet AGL, and throttle wide open, where its been since the start of the takeoff roll. That leaves the mixture: Below 8000 feet MSL, its lean of peak EGT to a target fuel flow of 9.5 gph. The beauty is that at low altitudes where full-throttle/2500 rpm is a lot of power, that fuel flow takes the engine quite lean of peak, broadening the detonation margin; at higher altitudes, that fuel flow is closer to peak, but I don’t care because the power output has diminished. Above 8000 feet, it almost doesn’t matter-the amount of fuel being consumed only controls speed. On descent, its throttle as necessary for speed and change the mixture back to near peak EGT, which I do once at the top of the descent and once or twice through to landing; going to a richer mixture in the descent produces more power, sure, but it also moderates CHT cooldown, which is more significant to me.

The important thing is that if I get busy flying the airplane, I don’t worry about the engine. At cruise-and-lower power, it wont hurt itself while I sort out my new IFR clearance or find the airport.

Dick Starks new book, a collection of essays, some of which have been published on our pages, is finally out. Fokkers at Six Oclock can be found at Amazon.com or ordered directly from the author at www.kcdawnpatrol.com. I have a copy on my desk, and use it often when this job seems too much like work. In fact, Dicks storytelling is such a good stress reliever it should require a prescription.