Well, my Sweet, I said to my wife, Sharon. The fifth times the charm. This plane will pass inspection with no squawks. I can feel it. She responded with a little ladylike snort of disbelief: Get real.

She was sitting on the floor under the fuselage of her brand new Airdrome Aeroplanes DH-2 replica fighter. The crisscross landing gear cables had loosened a bit, and the turnbuckles each needed about a turn to tighten them back up. Sharon was busy safety wiring the turnbuckles after theyd been adjusted.

I was sitting at the table of The Dawn Patrols hangar at beautiful Liberty Landing International Airport. As I sipped on a frosty can of hearty Diet Dr. Thunder I admired her new, pristine, flawless plane. It was going to be a great addition to The Dawn Patrols squadron.

Fresh from Oshkosh AirVenture, where the plane had won the Peoples Choice award in the Replica Fighters Association display area, the Airdrome Aeroplanes DH-2 was a thing of beauty. It looked like it just couldn’t wait to leap into the air. Wed been getting it ready for its final inspection by our local FAA inspector of choice, Ernie Jarvis of the Kansas City Flight Standards District Office (FSDO).The plane had been looked over by Sharon, me and the other members of The Kansas City Dawn Patrol: Mark Pierce, Tom Glaeser, Dick Lemons and Harvey Cleveland. They all said it was ready. 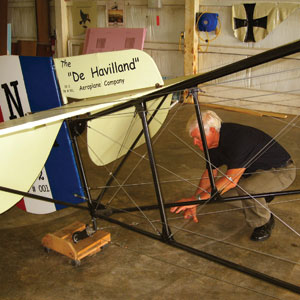 The tailwheel steering setup is given the beady-eye treatment.

Its been my dream to get a new Experimental plane inspected by the Feds with no squawks. I got close with my 1915 Taube replica. It had only one thing the inspector caught: The oil screen nut on the A-75 engine had not been safety-wired. Well, by golly, this time it was a sure-fire guaranteed deal. This plane was perfect in every way. There would be no squawks this time. Yessireebob! Every piece of hardware, every nut, bolt, rivet, screw, turnbuckle, tang, instrument, wire and cable was an FAA-approved component. The FAAs manual 43-13-1A had been followed as closely as we could. I triple dog dared the inspector to find anything wrong. After five planes, by golly, we were due.

Now, I have to stop here and introduce you to The Inspector, Ernie Jarvis, an Air Force veteran of more than 20 years. He was a flight engineer in C-130s and KC-10s in Desert Storm and has been with the FAA for more than 13 years. Hes kind of a rarity in the FAA in that hes a pilot. Not only that, hes a lightplane pilot. Add the fact that hes a taildragger pilot with his own pristine Cessna 170B, and you have a real keeper. He also likes airplanes. Best of all, Jarvis is one beady-eyed, nitpicky, suspicious son of a gun. Just the kind of guy Id like to have inspecting a plane that will have my wife piloting it around the sky. Some people would prefer an inspector who would look the other way at some small, non-essential items during the inspection. Well, were just the opposite. We want a real detail-oriented individual looking over our work. 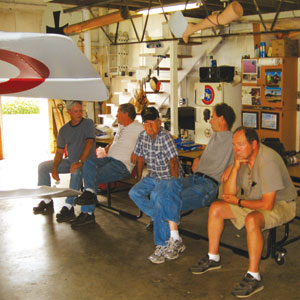 The usual suspects watch like vultures (albeit somewhat relaxed ones). From the left: Terry Glaeser, Tom Glaeser, Bob Loyd, Harvey Cleveland and Mark Pierce. Not sure about that item in the rafters. Perhaps someone asked for a leg up?

Wed prepared for a week for this moment. Just the day before the inspection, I was sitting on a stool admiring the work Sharon had done zip-tying the wires going from the engine to the instrument panel when right in front of my eyes, I saw a turnbuckle that wasn’t safetied. I was stunned. Wed both been over the plane several times, and neither of us had seen this potential source of embarrassment and shame. I showed it to Sharon, and she immediately got the safety wire and pliers out and did the deed.

Our confidence in our flawless presentation shaken, we both went over the plane again the day before the inspection and checked off all of the different places where we might have forgotten something. Instruments were marked with green and yellow arcs and red (dont pass this line) marks. All placards deemed necessary by the FAA were in place. The EXPERIMENTAL sticker was in the right spot to be seen by anyone getting into the cockpit and, most important, the first thing every inspector always looked at, the dataplate, was correctly engraved and riveted in place on the fuselage. This plane was ready!

The day of the inspection arrived. The Dawn Patrol and several other Liberty Landing International Airport bums were there in force to offer Sharon moral support. We had two buckets of Extra Crispy accompanied by a gallon of Sharon’s signature concoction: her take no prisoners, crockpot, kick butt and take names pork and beans (one of the most lethally explosive mixtures known to man). All of these ingredients were topped off with assorted chips and a cooler filled with frosty cans of hearty Diet Dr. Thunder. We were ready for a celebration (or a wake).

All of the Nieuports had been moved out of the hangar to make room for the inspection. The DH-2 stood tall and proud in the center. A table with two chairs was placed just to the rear of the airplane. All of Sharon’s paperwork was on the table, neatly arranged in rows and columns. Sharon was pacing like a lioness in a cage.

All of us were nervous.

Inspections are a nerve-racking time for everyone except the inspector. 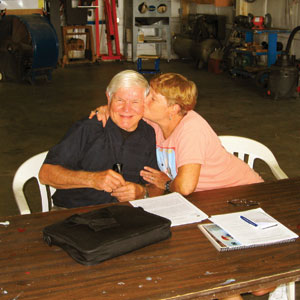 Most inspections don’t end like this. But Jarvis seems to be enjoying it.

We heard a car drive up, stop and the door open. He was here! The pucker factor of everyone in the hangar went up a few notches. (Please note: A visit by anyone from the FAA to your airport is an automatic pucker-factor elevator of at least two notches. If he gets out of the car with a clipboard and a pen…Incoming! Take cover!)

Then, suddenly, there Jarvis was, silhouetted like John Wayne standing in a saloon in front of the doors hed just kicked open. Into the hangar he sauntered, spurs rattling ka-ching…ka-ching…ka-ching. He stopped in front of the plane and stood with his hands on his hips, looking silently at the DH-2. The Dawn Patrol sat frozen in place like insects in amber. The silence was deafening.

Sharon hovered nervously nearby with a little notebook and pen ready to take notes. Jarvis stood there for a few seconds, bent over, pointed to the right lower wing aileron cable pulley and calmly said, There are no threads showing on this lock nut; replace the bolt.

For you daring souls, Sharon’s pork and beans recipe.

Add to a crockpot:

4 or 5 onions sliced and diced that have been cooked with a stick of butter in a microwave or skillet until translucent. (The more onions the better.)

1 tsp garlic powder (You cant put in too much!)

Set the crockpot on low and cook overnight. Don’t blame us if you have to get up at 3 a.m. to taste it. The smell is out of this world.

Well, hell! Our perfect inspection was shot down in the first 10 seconds.

I sat in stunned disbelief over at the table with the rest of The Dawn Patrol. We were so sure. Wed checked it so many times. Everyone else had checked everything too. Life just aint fair!

The rest was pretty anticlimactic. Jarvis found a few places where he wanted us to put washers under the heads of clevis pins, but that was it. Sharon’s list of squawks took less than 30 minutes to fix. I was fixing them while he and Sharon went through the paperwork jungle necessary to finish up the inspection. Logbooks were filled out. Papers were signed. The test area was marked out on a map. More papers were signed. But it was finally done! The plane passed. The Inspector usually doesn’t get kissed after inspections, but he did this time.

We broke out the Extra Crispy and ladled take no prisoners beans into bowls. Frosty cans of Diet Dr. Thunder were popped. A toast was made to the newest member of The Dawn Patrol: Sharon’s Airdrome Aeroplanes DH-2. Now its time to start flying off the 40 hours and see if anything untoward raises its ugly head. The adventure continues.