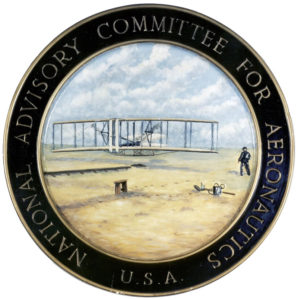 Many homebuilders don’t know of the debt they owe to an organization that would have been 100 years old today – the National Advisory Committee for Aeronautics (NACA). NACA morphed into the NASA in 1958, but we can still see its heritage in large wind tunnels and research complexes around the country. Many (if not most) homebuilts today have something that came from basic NACA research – at least a NACA duct or a NACA designed airfoil. Much of what we know about aerodynamics and making airplanes faster and more efficient came from the laboratories and wind tunnels of NACA in the first half of the last century. Today we celebrate the Centennial of the founding of NACA and thank the men and women of that pioneering agency for the advances that took humankind from KittyHawk to the lunar surface in just 66 years.

Today marks a special anniversary for the NASA family.  It was 100 years ago, on March 3, 1915, when Congress created the National Advisory Committee for Aeronautics (NACA), the organization from which NASA was created in 1958.

The NACA was formed because our nation’s leaders were concerned the U.S. was losing its edge in aviation technology to Europe, where World War 1 was raging on.  Its mission, in part, was to “supervise and direct the scientific study of the problems of flight with a view to their practical solution.”  As you all know, we not only regained that edge, but we became the world leaders in civil aviation.

Subsequent research by the NACA’s engineers at our world-class laboratories and wind tunnels across the country led to fundamental advances in aeronautics that enabled victory in World War II, spawned a world-leading civil aviation manufacturing industry, propelled supersonic flight, supported national security during the Cold War and laid the foundation for modern air travel and the space age.

A number of those laboratories and wind tunnels are still at work today, leading the development of revolutionary aerospace technologies.  NASA is committed to transforming aviation by dramatically reducing its environmental impact, maintaining safety in more crowded skies and paving the way to revolutionary aircraft shapes and propulsion.

When NASA was formed, we also inherited the NACA’s brilliant and dedicated workforce.  On Oct. 1, 1958, thousands of engineers, human computers, technicians and support staff expanded their vision to include flight through and beyond Earth’s atmosphere.  Many names we know from the early days of space exploration got their start at the NACA – including Robert Gilruth, Hugh Dryden, Chris Kraft, Gene Kranz and Neil Armstrong, among many others.

We continue to see the NACA’s influence in many areas of our work – the shapes of aircraft, retractable landing gear, guidelines for achieving stability and control in flight, landing and recovery operations for aircraft and spacecraft and even seaplane and floatplane designs.

In fact, NASA can boast that streamlined aircraft bodies, quieter jet engines, techniques for preventing icing, drag-reducing winglets and lightweight composite structures are an everyday part of flying thanks to research concepts and tools that trace their origins to the NACA.

Thanks to our NACA aeronautics legacy, we’re able to tell the world that every U.S. aircraft and every U.S. control tower has NASA-developed technology on board and that NASA is with you when you fly.

Now, as we celebrate our past achievements in aviation, our resolve is renewed to continue this heritage of excellence in aeronautical research with a strategic vision that will transform aviation in areas such as autonomy, commercial supersonic flight and transition to low carbon propulsion.

Our focus includes conceiving new aircraft and engines that burn dramatically less fuel, operate even more quietly and generate far fewer emissions.  At the same time, working with our industry and government partners, NASA will continue efforts to improve and modernize the nation’s air traffic control system so it can safely handle the additional air traffic and new types of air vehicles expected in the future.

Just as the NACA did in 1915, NASA today finds solutions to challenges facing the aerospace community that help the nation reach for new heights and reveal the unknown for the benefit of humankind.  I’m proud of our heritage and the innovative work NASA continues to do in Aeronautics.  Here’s to the next century of trailblazing ingenuity in flight.

I invite you to visit http://www.nasa.gov/naca100 to learn more about the NACA’s history, contributions and people.