By the time you read this, it should be common knowledge that I have been asked to be the east coast representative for Van’s Aircraft. What an honor and a total surprise! Ever since I completed that RV-4 in 1982, some of the most fun I have had in aviation has been speaking with other potential builders, taking them for rides in my own kitbuilt airplanes, and eventually seeing some of them complete their aircraft. As those of you who have built airplanes know, the experience can be a wonderful, and sometimes lifelong, journey that only begins with the building process. The friends you will make along the way, the support you will receive, and the memories you will create will last a lifetime. In fact, many of the best memories and experiences we have had in our life as a family have been aviation centric (notwithstanding the getting married, having kids, experiencing grandchildren memories of course!). I am really looking forward to connecting and influencing many more potential builders in this new role.

I do, however, intend to maintain a focus on contributing to the safety of our aviation segment through continued KITPLANES writing and forum participation. As many of you know, in my experiences as a DAR, and as the owner/operator of Base Leg Aviation, I get to inspect a lot of airplanes on a regular basis. I see the good and the bad, and sometimes the ugly side of Amateur-Built aviation, and I realize that it is important not only to help those who may be having a problem, but also to communicate those findings so others can avoid the same mistakes. After all, we all had to learn at one time, and I constantly remind myself that if someone hadn’t helped me, I would probably be a contributor to the ugly side. I still learn neat ways to do things from many of the builders whose airplanes I inspect, a constant reminder that we can continue to learn. 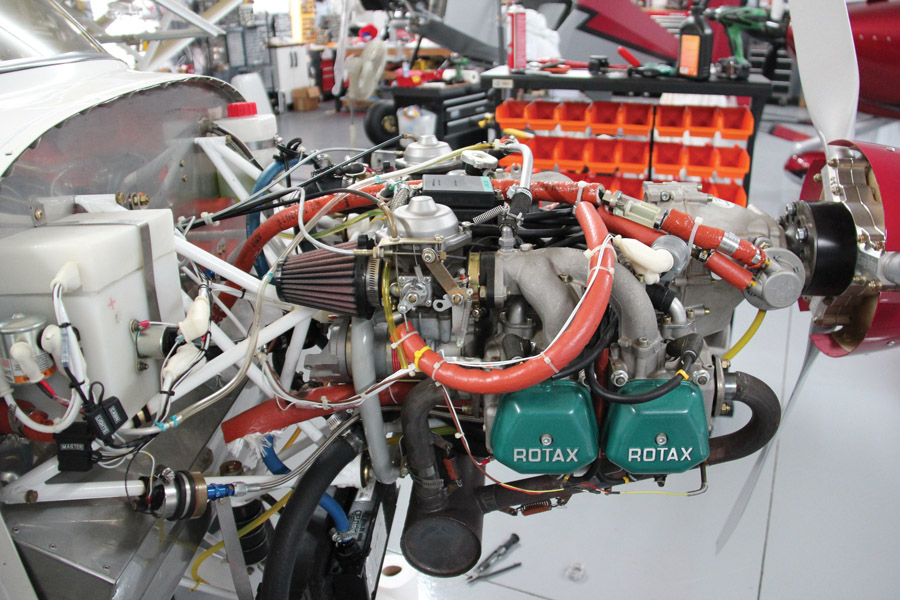 Now that you’ve installed the engine in your homebuilt, do you know how to maintain it? The required skill set is completely different.

One of the areas of late that I think warrants some discussion is the instrumentation and capabilities we are seeing in Amateur-Built aircraft. Gone are the days when we had our head out the window looking for the next checkpoint to come up, with our sectional neatly folded on our lap with the planned route highlighted. Checking our groundspeed against landmarks and comparing our available fuel supply to the calculated destination ETA was a regular exercise. Now the tendency seems to let the autopilot do the flying, while we watch the scenery go by on the synthetic vision EFIS and listen to music. The moving map displays the fuel range ring, constantly showing as many different fuel calculations as you want, along with groundspeeds, ETA, etc. There’s certainly no need to do calculations anymore, and I even wonder how many pilots today could actually calculate a distance from a VOR, or even a groundspeed if they had to do so. 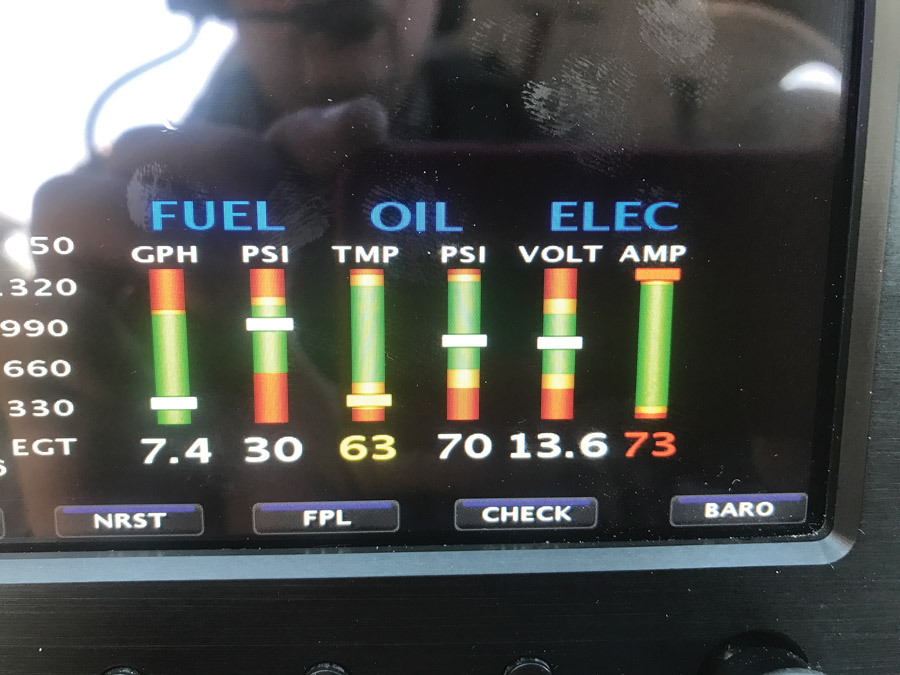 Here is what a normal alternator and voltmeter should show right after the engine is started. Notice with a lithium battery the alternator output is at maximum.

Sometimes a customer will mention that they are having a particular engine or electrical problem, but when I begin to ask for more data, it’s clear that it’s not going to be forthcoming. As an example, when I inquire as to what the CHTs were doing in the climb vs. the en-route segment, I often get an answer like “I don’t know, as they were all in the green.” On one particular airplane for which I heard that reply, I looked at how the color-coded temp ranges were configured for the CHTs. Amazingly, they were depicted as green from 0 to 500 degrees! No caution or warning ranges were depicted. Yikes! Potentially, this pilot could have been unsuspectingly flying in the green right up until the engine failed. Luckily, most of the EFIS and engine monitoring systems installed today have the ability to download the information after the flight. 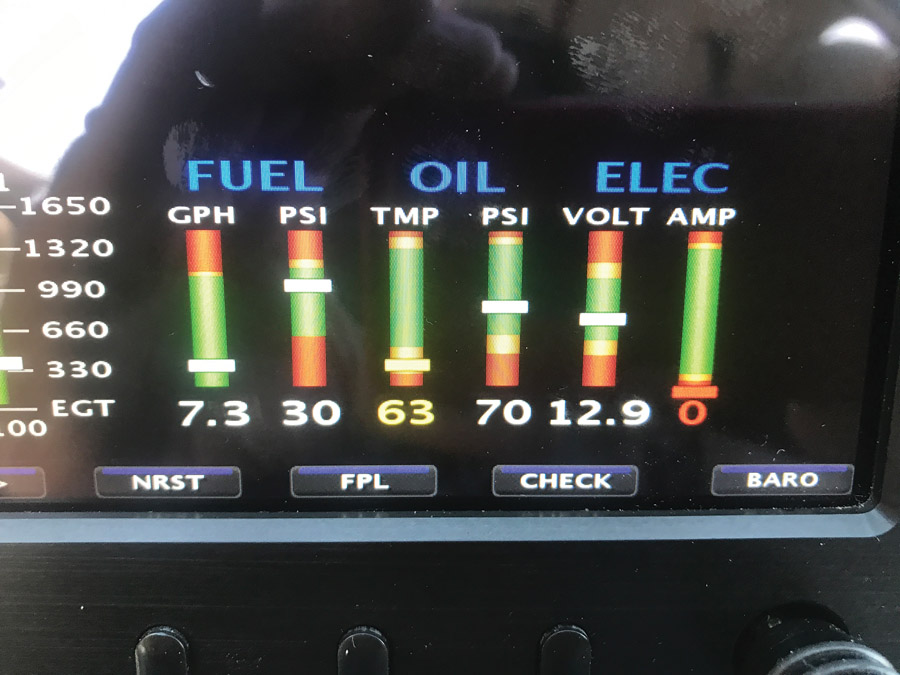 Here is a failed alternator. After engine start the alternator shows zero amps and voltage is steadily decreasing as loads are added.

But, what if you needed the information to make some decisions in flight, such as whether it is safe to continue? With today’s primarily electric panels, I think all pilots should have a very basic understanding of electricity, especially an understanding of what information the voltmeter and the alternator are providing.

Most recently, I have seen a number of failures that could have been prevented, some of which can also be thrown into the lack of best practices. In one case, a customer called and indicated that he thought his airplane had an alternator problem. In further discussions, he mentioned that he had to jump-start the engine every time he flew for the last few months. Ah! This was a clue, and this is where it helps to understand the interaction between alternators and batteries.

Alternators, unlike generators, require a voltage to excite them so that they can produce power. Jump-starting a really dead battery may work to get the engine turning, but once the ground power is removed there may not be enough of a charge left in the battery to excite the alternator, especially once the avionics are switched on. In this case, he also mentioned that he was unable to talk on his radios after starting the engine.

So is there a way to get an early understanding of a failing battery? Yes! We’ve all been conditioned to check the oil pressure gauge right after an engine start, but once that is completed, our eyes should go to the volt and ammeter gauges. A healthy battery will show a very high current flow number on the ammeter for a minute or so after the engine is started. In the case of the newer lithium batteries, the number will shock you, as it will be right at the capacity of your alternator, exceeding 60 amps in some cases. A poor or dying battery will not accept much of a charge at all, so it’s really important to take a look at both gauges. A properly working alternator will show 13.5 volts or more, and certainly anything less than 13 volts after an engine start calls for some investigation, especially if one is launching into IMC with an all-electric panel.

Since alternators usually have two circuit breakers, one for the regulator and one for the main output (sometimes called the B lead), check those while the engine is still running. If no luck, then shut down and check the alternator belt, both for proper tension and possible breakage. Beyond that, it is time to get out a meter and start chasing wires, regulators, and alternators, which might require some help.

Should Repairman Certificate Requirements be Changed?

Speaking of help, many of the problems that I see in the field could be prevented, as many of them are due to lack of experience around preventative maintenance. Our wonderful kit aircraft industry has been great at increasing the aircraft completion rate, which has now also created a large number of first-time airplane mechanics. Sometimes I wonder if the repairman’s certificate that is issued to the builder of an Amateur-Built aircraft should also come with some requirements. As an example, those who purchase Light Sport Aircraft and wish to work on them are required to take an approved maintenance course, and so far they seem to have a good track record. I know some will disagree with me on this, but I think the skill set and knowledge base required to maintain an IO-540 engine in a flying aircraft is a lot different than what was required to build it and install it. Some of the better kits on the market now have such detailed firewall-forward kits that there really isn’t a need to understand the systems and their required maintenance cycles. Just follow the instructions and put it all together. Magnetos, carb/fuel servo inlet filters, and oil sump screens are just a few examples of important items requiring periodic maintenance of which most first-time builders would have no knowledge. Perhaps the use of tech counselors or an A&P for the first year or so would be a good idea, too.

I am not one for making more rules and inhibiting our freedoms around Amateur-Built airplanes. However, the industry has really changed over the last few decades, putting out great kits that enable a much higher completion rate. The airplanes are immensely more capable than the single-seat tube-and- fabric airplanes of the “early days,” both in capabilities and seat capacities. With that complexity comes a responsibility to learn, understand, and comply with the maintenance requirements of the airframe, engine, and associated components. For first-time builders, that can take some time across a few years to understand the inspections required by some of the life-limited components that were used. It doesn’t have to be burdensome, and it can continue to be fun, but the consequences of non-compliance can cause potentially serious problems for the unwary. Taking advantage of the many resources available will improve the safety and fun factor!

Amy Laboda - February 17, 2009
0
How do you build and fly a homebuilt aircraft while still maintaining a good relationship with spouse and family? That is the question, and Amy Laboda offers some answers.