If the state of the economy could be measured by the number of airplanes changing hands, along with climbing prices, I would have to say it must be booming. I’ve been really busy with prebuys for the last six months, to the tune of about three to five per week, all across the U.S. I’ve had the opportunity to see some fantastic airplanes and meet some really nice people. It’s always fun for me to see both parties walk away happy, some with money in their hands and some with a new toy. 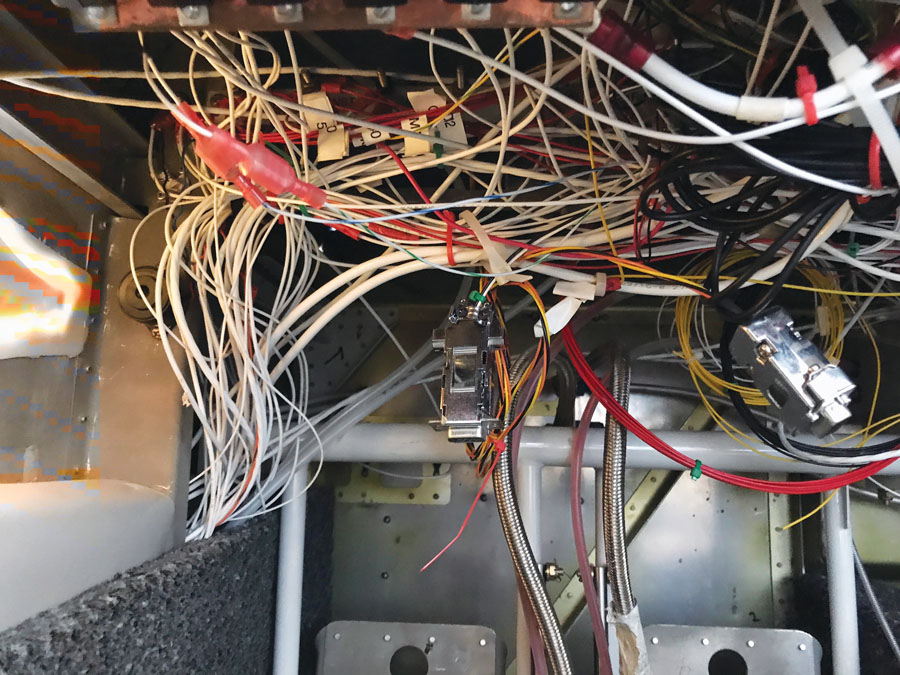 It’s bad enough trying to expect reliability out of an airplane that has wiring in this condition. Trying to convince a buyer that he/she will understand all of the unlabeled connectors is another story! 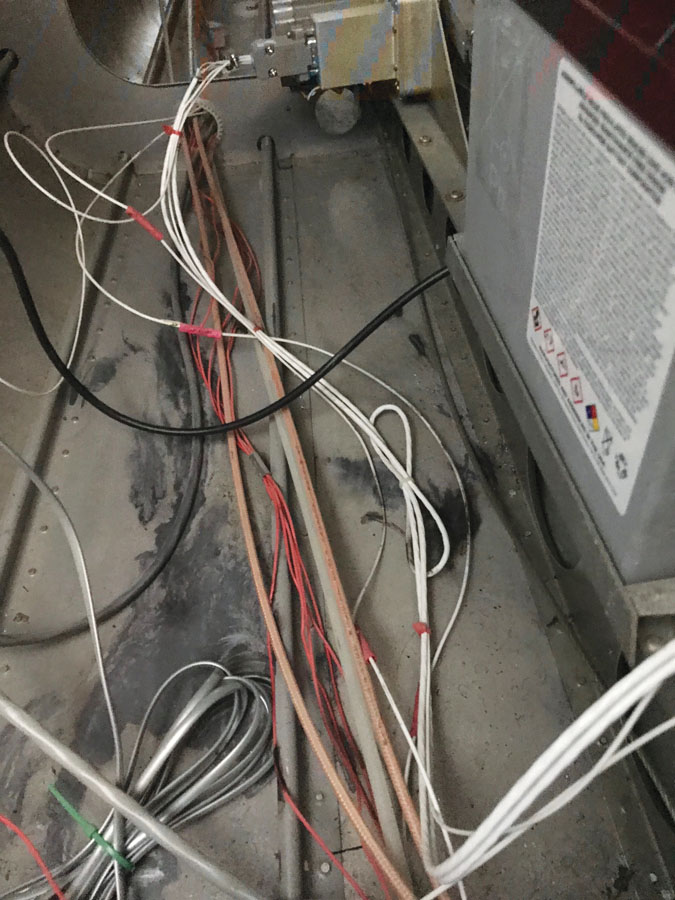 However, I also get to experience way too many disappointments and missed expectations, along with time and money lost on both sides. So, I thought I would share with you some do’s and don’ts, or at least some things from my viewpoint, that could have changed the outcome.

A perplexing observation I have had is how many aircraft I see that are not even prepped for sale. I get it when it is an estate sale and the sellers may not even begin to understand aircraft nuances. Sadly, I see some planes where the builder/owner developed a long-term debilitating disease, and the aircraft sat untouched for many years. I think the lesson there is for all of us to leave some direction for our families in the event of similar circumstances. As hard as it may be on family or friends, the aircraft is certainly more valuable, and most likely safer, if it is sold sooner rather than later. I do feel really sorry for the families when they discover that the aircraft is now worth substantially less than they hoped for. It could be due to an engine that has rusted beyond repair or perhaps airframe corrosion caused by rodents taking up refuge in an idled airplane.

Another point I would like to make is that it is a good practice to have someone else look over your airplane every once in a while. I have some customers who have their repairman’s certificate and still come to me every so often for their condition inspection. I have the highest respect for them. 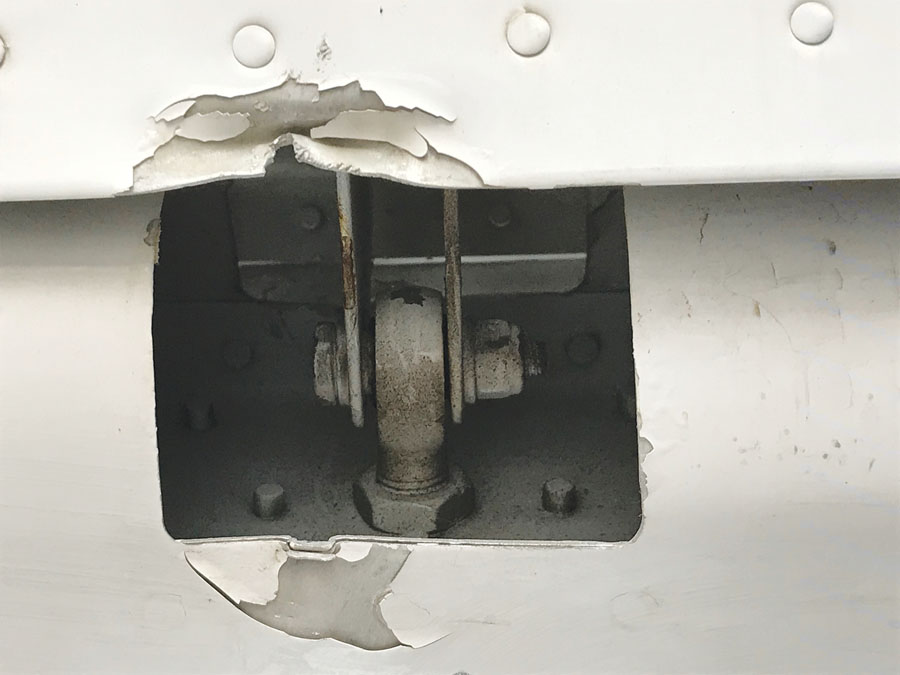 Repairs should be made to this kind of skin tear prior to flying. At least try to bend it back into shape and stop-drill the tear so it doesn’t propagate and potentially jam the control surface.

For those of you who are healthy and selling your airplane, clean it up! Think of it as a first date with the potential new owner. When the hangar door opens up, it should at least look its best, and that doesn’t mean it has to be a show plane. But it should be clean of oil and grease, both in the engine compartment and on the belly. Take the time to organize and clean the interior, clean the bugs off the windows, and have all of the logbooks and paperwork ready for inspection. For maintenance items, such as worn and bald tires, at least tell the buyer of the condition beforehand and whether or not you plan to fix anything prior to delivery or acceptance.

One thing you should consider as a seller is to have one of your friends come by and be there as you open the hangar and then ask them for their first impressions. As an example, think about a picture on the wall in your house that you took the time to perfectly center, and how it was a focus of attention for a while. Then as time goes on, you forget it’s even there and may not even notice it is crooked until someone else points it out. Things that we are around all of the time tend to get overlooked. (Hmm…come to think about it, the same observation is probably relevant to our family, but that discussion belongs in another magazine!) 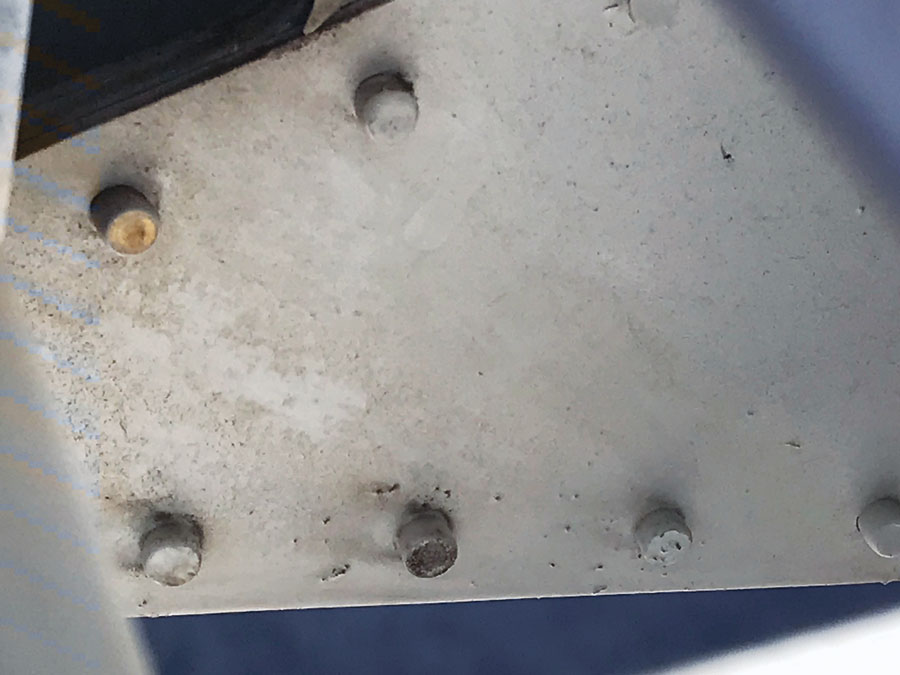 You can get away with some bad rivets throughout the aircraft, but not all of them on a critical part such as the elevator horns.

We can all argue whether service bulletins are relevant to our amateur-built aircraft, but in today’s market a good number of the buyers are coming from the certified aircraft world. You aren’t going to make any points trying to explain why you thought they weren’t necessary on your aircraft, especially when it comes to some of the more serious ones that may have a safety impact.

Since I know most of you, including my editor, like real examples with lots of pictures, I am going to share some examples of really egregious deal-killers I have run across lately. Hint: Even for those of you not selling your airplane, you may want to pay attention to some of these examples and go check your own airplane.

Most of these are going to come from an RV-10 that I recently inspected. I won’t identify the aircraft or the owner, but suffice it to say that it was far enough away from my home base in Atlanta that airline tickets and rental cars were required. The buyer came along, with the hope and plans to make a nice three-day trip back home, visiting family along the way. He had lost his precious RV-10 due to an unfortunate mishap and was now anxious to replace it. Phone calls and discussions with the seller revealed that the only potential snag was a minor fuel leak on the right tank. The minor fuel leak turned out to not even be relevant. When the hangar door was opened and the bright sunlight shone in on the aircraft, I got the feeling this trip was going to be for naught. 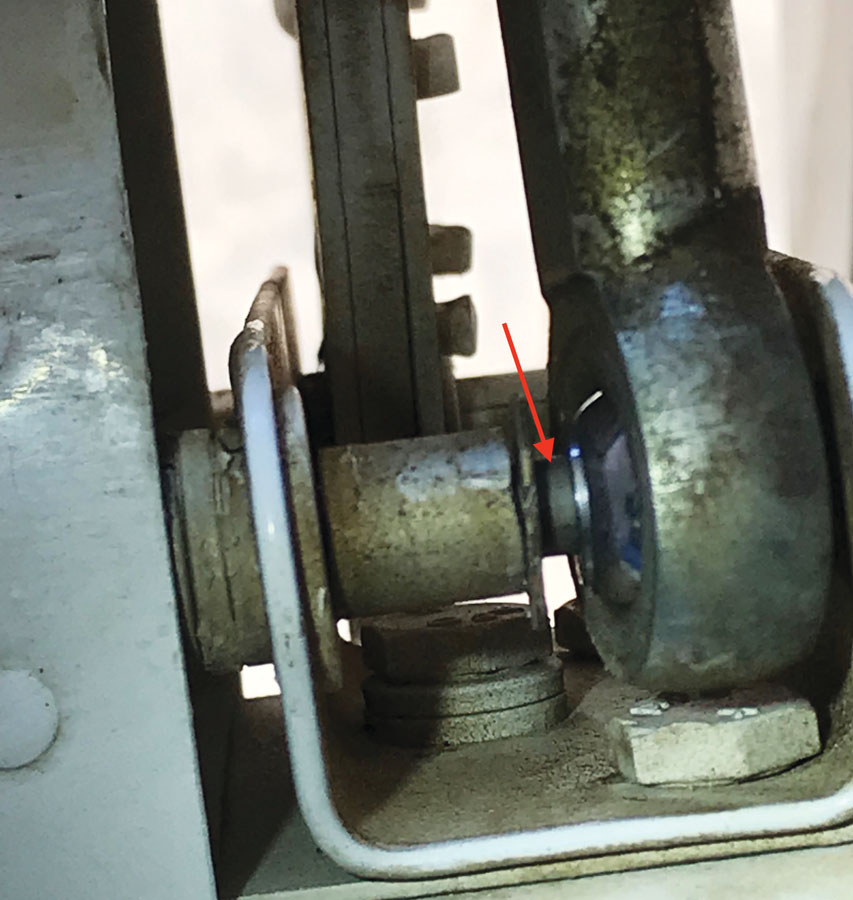 There should be a spacer or washers taking up space indicated by the arrow. Without a spacer, the rod end bearing will slide back and forth on the nut—not good on a primary control surface such as this aileron.

The aircraft had been flying for about 10 years and 1000 hours, yet the engine compartment looked like a 4000-hour ramp derelict. Hmm…First impressions were not good. As I got closer, I saw that engine baffling and seals were very worn and begged for replacement. The oil cooler duct flange to the oil cooler was broken and hanging down. Intake gaskets and hoses were all cracked and leaking, and the engine control cables had most of the sheathing melted off. The brake fluid reservoir had an overflow tube on it that was bent over and creased. The exhaust joints looked like they had never been treated with mouse milk or a penetrating lubricant and were quite frozen in place. There was some poorly secured heat shielding attached to the lower firewall that indicated some kind of heat-related problem was going on. The main bolt holding the alternator to the engine was very loose and appeared to have never been tightened. There were a few Adel clamps in the engine compartment that were quite substantially of the wrong size. 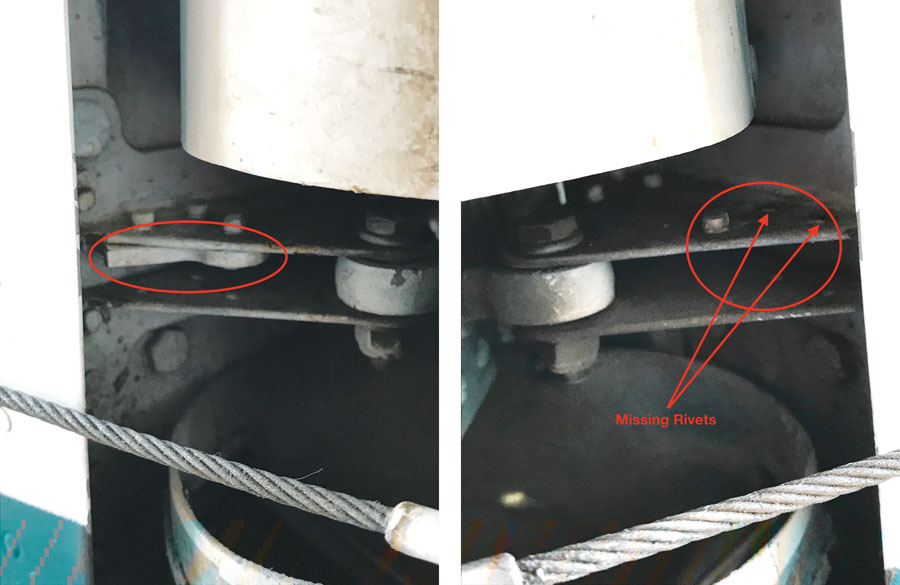 Look closely and you will see the rudder stop completely missing on one side and bent back out of the way in the other picture. This allowed the rudder to freely swing until it contacted the elevators. Yes, there were puncture holes in the rudder on both sides from the elevators.

The coup de grce was that I could reach in and turn the rubber motor mounts by hand! That’s right, the rubber isolator engine mounts were so loose there was a gap of about 1/16-3/32 inch between them and the engine. Most motor mounts will go close to engine TBO before needing replacement, so I could only surmise that they had never ever been torqued to the specified values. I could only imagine how much that engine must be shaking in the mounts when it was running. By now I knew we would not be flying the airplane that day, and it had only been about 15 minutes since we arrived.

It would have been easy to stop there and explain things to the buyer, but the builder/seller was over 80 years old, and I decided it would be better to inspect everything and help him understand he needed some help with his airplane. So I continued to inspect the airframe, and things didn’t get any better. 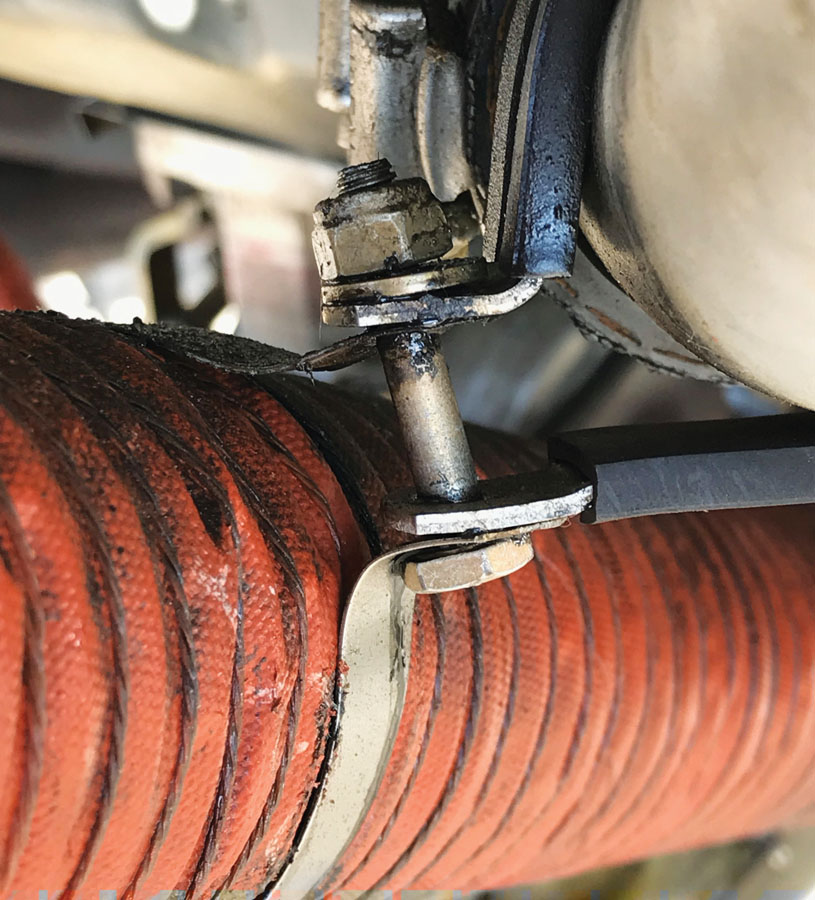 This is not the proper use of an Adel clamp. Either a spacer should be used or a much larger Adel clamp (preferred).

The four-year-old service bulletin for the nose gear had never been complied with, along with quite a few other SBs. The owner said he wasn’t aware of them. There was substantial damage to the rudder and vertical stabilizer. Both rudder stops had broken off and had allowed the rudder to swing in both directions far enough to cause punctures from the elevators. In the process of trying to correct it, the builder had created some kind of contraption he installed between the rudder and the vertical stabilizer, which tore the skin on both surfaces. The bolt connecting the two elevators together was so loose I could move each elevator independently from the other.

The aileron control rods did not have any spacer washers on the bolts, so the rod ends were not held tightly in place as required. The rivets in some critical locations like the elevator horns, were not set correctly. The ELT antenna was broken off, and the tail strobe light lens was so blackened that I could not see through it. An operational check showed it to be inoperative. The wiring underneath the panel looked like spaghetti and had quite a few unlabeled connectors hanging down. 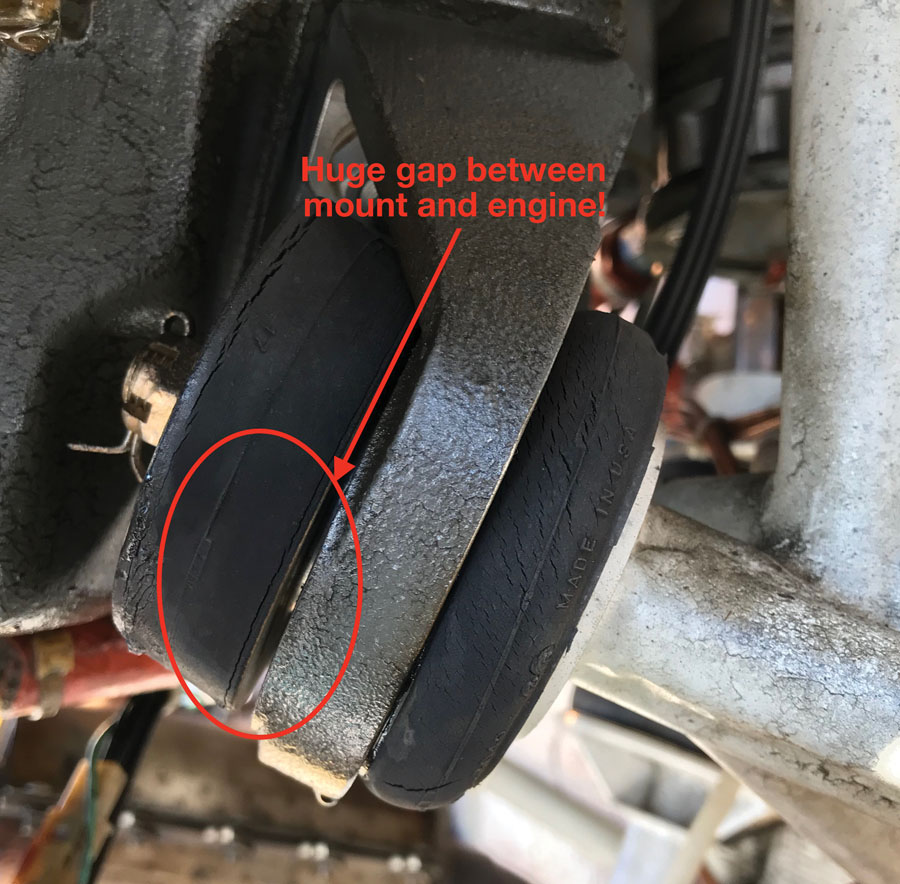 There should not be gaps between the rubber isolators and the engine mount/engine. In this case, I could reach in and turn the rubber mount by hand!

When the buyer communicated to the seller that he wasn’t going forward, I was shocked at the reply: “Why, what’s wrong with it?” I felt bad for the seller and explained that he should engage the services of someone competent and familiar with RV-10s so as to thoroughly examine his airplane. I also recommended that he really not fly it until repairs were completed, as he prided himself in flying it every week. I politely conveyed the message that it wasn’t airworthy.

The sad thing is that everything found on this particular airplane was fixable, although probably not by the owner. Expectations were set around a small fuel leak as being the only problem. This one was probably the worst most-recent example of a poorly prepared, and poorly maintained, airplane. Of the ones I inspect, it seems pretty regularly about 30-40% do fail the prebuy inspection. Everyone is disappointed, and it certainly takes the fun out of it.

Hopefully, I’ve given you some useful ideas on how to prep your own airplane for sale or at least for inspecting it in some areas that may get overlooked—like that picture on the wall.