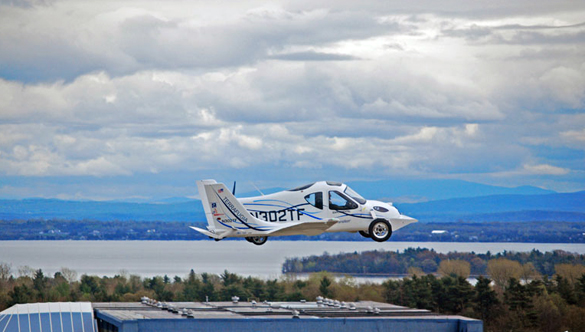 I must confess to being torn between twin folding-wing temptations. Should I get on the Early Adopter list for the Terrafugia roadable airplane or the Icon A5 amphibious LSA? In the presence of the respective pitchmen, I can almost be persuaded. However, a third dilemma now presents itself in the form of a proposed flying trike-motorcycle, the Sampson Motors Switchblade. Only jaded Oshkosh temperament stiffens my resolve.If you prefer to carry your motorcycle rather than fly it, the folks at MotoPod have devised a belly pod for the Vans RV-10 that accommodates a modified 225cc Suzuki with the front wheel detached and handlebars folded. Approvals are being sought for certified aircraft.

I discovered many other opportunities in the making around the show. Over in front of Hangar D, there’s an interesting Russian twin-Rotax amphibian being promoted with halting English, only from brochures at this point, though it is flying. The four-seat Samara (from its city of origin) has a turtledeck hatch and a walkway between its twin tails to facilitate dry-footed egress when backed onto the beach. 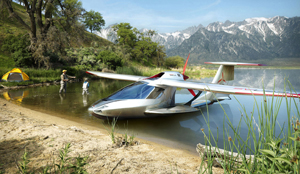 The Icon A5 has made a splash.

The adjacent E-7 Bush Hog, on the other hand, was available for inspection in flying form, a big seven-seat single powered by an IO-720 Lycoming, or alternatively a small turbine. It resembles a scaled-down Cessna Caravan, with its rugged maingear cushioned by low-maintenance rubber biscuits.

Most fascinating was the one-off Grumman Widgeon look-alike over by the old Brown Arch flight-line gate, from a distance resembling the Franklin-conversion of the old G44. Instead, its an all new slick composite airframe called the Ellison-Mahon Gweduck, powered by a pair of 300-hp IO-540 Lycomings.

Jet Blue Airline shared Aeroshell Square with the Airbus A380, landing its one-and-only Blackberry A320 at mid-morning, dubbed the Beta Blue airplane. Hardcore in-touch devotees can log on in flight (above 10,000 feet) with appropriate equipment.The old Type-Club tent at the Vintage Aircraft Red Barn is no more; in its place is a fine new Vintage Hangar, where the affinity groups for each of the older designs can meet under hard cover. The big attraction this year was the only surviving PA-18 Pitcairn autogiro (I know, thats the way they spelled it), reconstructed from a basket of parts to flying status. It was parked in the antique area in all its fresh glory.

In the North exhibit area, the Olde Oshkosh row still favored by many veteran exhibitors, Sonex Aircraft was displaying a Sonex that sported miniature turbojet engines mounted between its V-tails. Not yet flying, it gets attention and threatens to lower the entry bar for the VLJ marketplace.

A finer day for strolling the Oshkosh line could not be imagined.