Recently I decided to check that old steam-gauge analog needle tachometer in the Cessna 182. The last logbook entry I made regarding tach service was the day before Christmas 1975. I don’t know about you, but my personal body tach needed calibration quite a few times from 1975 to the present, and I worry about the airplane’s mechanical tach.

There are a few choices in this regard, and I’d like to guide you down the path that I’ve found works best for me. First, there are four main varieties of tach check devices: mechanical, digital active, digital passive and stroboscopic. (There is a fifth variety involving measuring engine sound inside the cockpit that I’ve never tried before. If anyone out there has, I’d appreciate some feedback.) 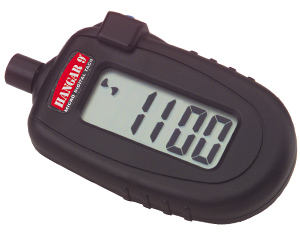 I’ll dismiss the mechanical tach check devices right off the bat. I couldn’t even find one for sale on the various aircraft tool web sites, but I know down deep in my toolbox there is one I bought at Oshkosh in the mid-1970s. It consisted of a credit-card-size piece of thin aluminum with a rectangular slot milled or punched into the center with a spring steel wire that vibrated (by hand) across this slot. You could adjust the frequency of the wire’s vibration by means of a setscrew, and (if you were lucky) you could get a reading of the rotating prop +/- 200 rpm of actual. Not exactly a precision instrument.

I also don’t care for the digital active tach checkers. This type requires you to place a reflective tape onto the propeller. The checker shoots out a laser beam, reflected by the tape, and then a laser detector on the checker counts reflections on the tape and translates that to rpm. It’s very accurate, but pretty difficult to use in anything resembling sunshine-even in a hangar.

I much prefer the photocell digital passive tach checkers. With these you actually want strong light in front of the propeller. As the propeller passes through the photocell “eye” it creates a momentary dark signal from the photocell. You can count the photocell dark pulses and translate them into pulses per minute. Where to find strong light? From the thermonuclear factory known as the sun. Put the sun at your back, face your airplane toward a uniform reflective matte surface and there you go. The best surface I’ve found is an outdoor painted hangar wall. Don’t use a bare aluminum wall; it is far too shiny to give good results unless you are at some reasonable angle.

This white hangar wall, with the sun at your back, is the perfect sunlight reflector for a photocell tachometer.

All of which doesn’t get you rpm, just yet. Right now all you’ve measured is how many times the propeller blades interrupted the light supply. You’ll need to divide that number by two for a two-blade prop and three for a three-blade prop. Piece of cake for a digital circuit, but there needs to be some sort of input for the tach checker to tell it how many blades your propeller has.

There must be several dozen manufacturers of passive digital tach checkers, but in my book two of them stand out as reliable and fairly easy to come by. They are both in the $30 to $50 price range. (If you really want to go on the cheap, you can get something that will work OK in very good condition from your local hobby RC airplane store. But you may have to fiddle with the RC device to get good results.) 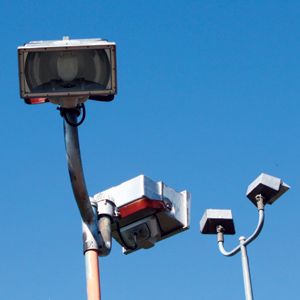 The strobe light source in front, being lower, is easier to use than the taller one in the background. The airplane can be closer to the lower light and still have the prop cut the light as it passes through.

Cermark makes a tach check instrument called One Touch. It was once widely available, but Cermark is currently in the process of designing a new model. However, the old model is still on a few shelves-if you don’t mind looking. The instrument is powered by its own 9-volt battery and reads from 10 to 10,000 rpm with a resolution of 10 rpm. You can adjust it to read two-, three- and four-blade propellers. It was designed from the get-go to be an instrument for full-size airplanes, but most of the sales are to the RC folks.

Hangar 9 makes a neat tach checker called the HAN 156, but the company is quick to point out that it is intended for RC aircraft only. However, several reports in www.pilotsofamerica.com say that this device works well on full-size airplanes. It powers up with a lithium “coin” cell for operation and is also usable on two-, three- and four-blade props. It is in current production and appears to be widely available for less than $30. Its range goes up to 32,000 rpm, which we will never see in a homebuilt airplane, but it is nice to know it’s there.

How to Use One

The stroboscopic tach checker is a real friend of mine. It’s free and extremely accurate, though you get only four or five checkpoints over the span of the tach range. Here’s the deal: Those sodium or mercury vapor lights that illuminate the runway at night at most airports are simply large strobe lights that flicker on and off 120 times a second. In the United States, the electricity delivered to our houses and airports is what is called 60 Hz power. That is, it goes from zero to a positive peak, back through zero to a negative peak and back to the starting zero. This process is repeated 60 times per second. The metallic vapor lights fire once on the positive peak and once on the negative peak, giving us a 120-pulse-per-second strobe light. Because 120 pulses per second is 7200 pulses per minute, we have a 7200-pulse strobe that’s readily available (at night).

The way this method works is that at certain rpm values, the prop will appear to stand still as the strobe light alternately illuminates and then goes black for a period of time. If your prop is in the same place every time the strobe fires, it will appear motionless. This method of checking the tach is extremely accurate.

Of course, this method is not foolproof and there are ways you can unintentionally skew the results. The easiest is by using a standard fluorescent fixture with an electronic ballast rather than sodium or mercury vapor strobe lights. To get the efficiencies that electronic ballasts have, a frequency in the tens of thousands of pulses per second is used.

Another method is to take a false image between the data points shown below where an oddball set of harmonics gives many blades that do not correspond with the table.

Finally, the worst trouble you can get into is to fixate on taking the measurements and neglect to hold the brakes. You don’t want your airplane nudging forward into an inanimate object…like the light stanchion. As I do anytime I’m working on a burning and turning airplane, I make sure there is another pilot doing nothing more than riding the brakes.

Step Up to the Mic

Now I freely admit that I haven’t tried this technique, but you can use the sound inside the cockpit to measure rpm. The bark of the exhaust system into a microphone connected to a portable computer and a free program available from www.tunelab-world.com/rpmsound.html will let you read rpm from your Windows computer screen. For those of you in the Mac world, the same folks who wrote the Windows program wrote http://itunes.apple.com/us/app/engine-rpm/id340401811?mt=8 available for $8.99 from the iTunes store. And where to get that microphone to plug into your computer? It’s the same one you use for telephone conversations on your portable device, and can be had for less than $10 at your neighborhood geek shop.

Over the next few months I’m going to take a closer look at all this computer geekery and get a handle on the goodies out there for us. Until then, stay tuned.