As I write this, it is the Ides of March in the year that will live in infamy. We are all aviators or we wouldn’t be reading this magazine (my favorite and I get several). In the 35ish years that I have earned my income flying airplanes, this is about the fourth time I’ve witnessed the dark side of the pendulum. Even though I have faith that it is only temporary, it is frightful to watch the 401k rapidly descend through 301k on its way to 201k. Hopefully by the time you read this, this horrible state of affairs will have abated or at least turned the corner. Maybe not. The prognosis seems to change by the hour.

I just completed an airline assignment. There’s a chance it may have been my last. I’ve been lucky and blessed. World’s best job in the world’s worst industry. Time will tell. Coming to work was surreal. A lot of similarities to 9/11 but much scarier in some ways. The 9/11 attacks were man-made. This one is nature. I’m not quite sure which is worse at this point. In the pilot lounge of our domicile, one of our pilots got a text from his son saying that his regional airline was shutting down. My son came from a regional to my airline a few years ago. I worry about the young and junior and hope they have the same opportunities that I enjoyed.

On the first leg I was paired with someone quite junior who obviously had concerns about career security, which is normal and never fully appreciated until it is lost. I tried to be as upbeat as I could as we talked about a lot of potentially ugly scenarios. It was sobering. It was painful.

Later in the sequence, I was paired with a different first officer. He was quite senior and could even hold captain if he wanted to, but was enjoying being near the top of his bid category. We exchanged the usual pleasantries and chitchat. I was not looking forward to talking about depressing things. Then it came to light that my FO was building an RV-14. Hallelujah!

It was sunshine to my soul. It was calming, therapeutic, even cathartic. For those hours, at least for me, it was a necessary break from the bleak. A refreshment, a blessing.

Then out of the blue, we had a hard slap back to vivid reality. On the next (last) day of the trip, we left KMDW Chicago Midway airport for a short “turn” to KCVG Cincinnati and back to Midway before the last leg back to Phoenix. The departure and flight to Cincinnati was quick and easy, but upon arrival and trying to get our clearance back to Midway, we were told that all flights to KMDW were grounded because controllers in the tower had tested positive for the virus and so the tower was closed. Our flights were canceled and we and a lot of our passengers were deadheaded to Denver and beyond. I must confess that I’m not much of a fan of riding in the back. I’m spoiled by the view and more comfortable seat up front I guess, and boy you notice someone coughing nearby now more than ever.

I wasn’t flying on the day of 9/11. I had actually just finished a trip the night before. That day was surreal, too. I owned a Socata aircraft at the time and even though I couldn’t fly it because of the closure of all airspace, I just wanted to be around it. I had received a service bulletin, so I decided that afternoon to go to the airport and check out the airplane and the service bulletin. There were no security fences at most general aviation airports in those days, so anyone could just drive up to the airplane, which was parked in a covered tie-down. The service bulletin involved checking the seat pans of the front seats. Flashlight in hand, I was door up—legs sprawled out on the wing and torso contorted into the footwell to inspect the seat pans from an upside-down perspective. Firmly pretzeled in, I heard two cars pull up at high speed and screech to a stop. I considered looking to see who it was, but the yoke I was under prevented that, and for a brief moment gravity, physics and human physiology were not my friends and I feared that I was stuck. Then I heard a stern command to exit the aircraft with my hands up!

I yelled back that I would love to, but I was stuck and needed a hand. This brought a firm grasp to the back of my shirt and a yank that left a scratch on the wing from my belt buckle and a bump to the back of my head from the yoke—both of which probably remain to this day. As officer Laurel extricated my felonious hiney from the aircraft, officer Hardy pointed his weapon in a way that made us both uncomfortable. Thankfully, my airline ID was in my car and my registration was in the airplane, and I assured them that “Death to America” was not in my vocabulary or intentions. We actually shared a good laugh at the end and joint bewilderment for the blink of an eye that was rapidly moving our respective cheeses.

Fast-forward almost 20 years and first thing I wanted to do today was go out to the airport and hang out in the hangar with the RV-10. I can’t explain it and it may sound corny to some, but it gives me peace. I decided to accomplish the service bulletin on the nose gear leg, and while I had its forward parts undressed, clean my fuel injectors via Paul Dye’s recent explanation of how to do so.

We are all part of this avocation because there is a passion within us that we can’t explain but is very real. Bad men or bad times can disrupt our plans but can’t disrupt our dreams if we don’t let them. Some of us have flying airplanes, and some have kits in varying stages of completion. Some are just wannabes, and we’ve all been there. Sometimes we have it all and sometimes we just have a stack of magazines and catalogs to stimulate our dreams.

The world may appear to be losing its mind, but this craziness will pass. It always does. No doubt some of us are going to be severely impacted. Projects stalled. Aircraft sold. Orders canceled or deferred. It’s a gut punch. Nevertheless, we are all part of a vibrant and enriching community of similar interests and passions, and one of the things that we do best is support each other. Once we can meet in groups again, let’s make a concerted effort to attend our EAA chapter meetings. Let’s make the next available Oshkosh and other airshows the best ever. We will get through this. We mustn’t let the fire in the hot section flame out for ourselves or each other.

As much as I love my RV-10 and consider it the most versatile general aviation aircraft I’ve ever flown, for some time I have been considering building another aircraft, even though I haven’t decided which one or even what type. I like all types. Maybe an RV-15 of which I know nothing about. If they announced it tomorrow, they would have my deposit same day. This wretched COVID-19 mess has pushed me from maybe building to absolutely building. Building gives me peace. I go to church but I hope there are hangars in heaven, too, because mine is a sanctuary on earth to me.

The grim reaper can have my rivet gun when he pries it from my cold dead fingers.

Build on mates, even if only in dreams. 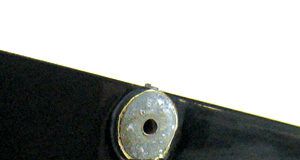